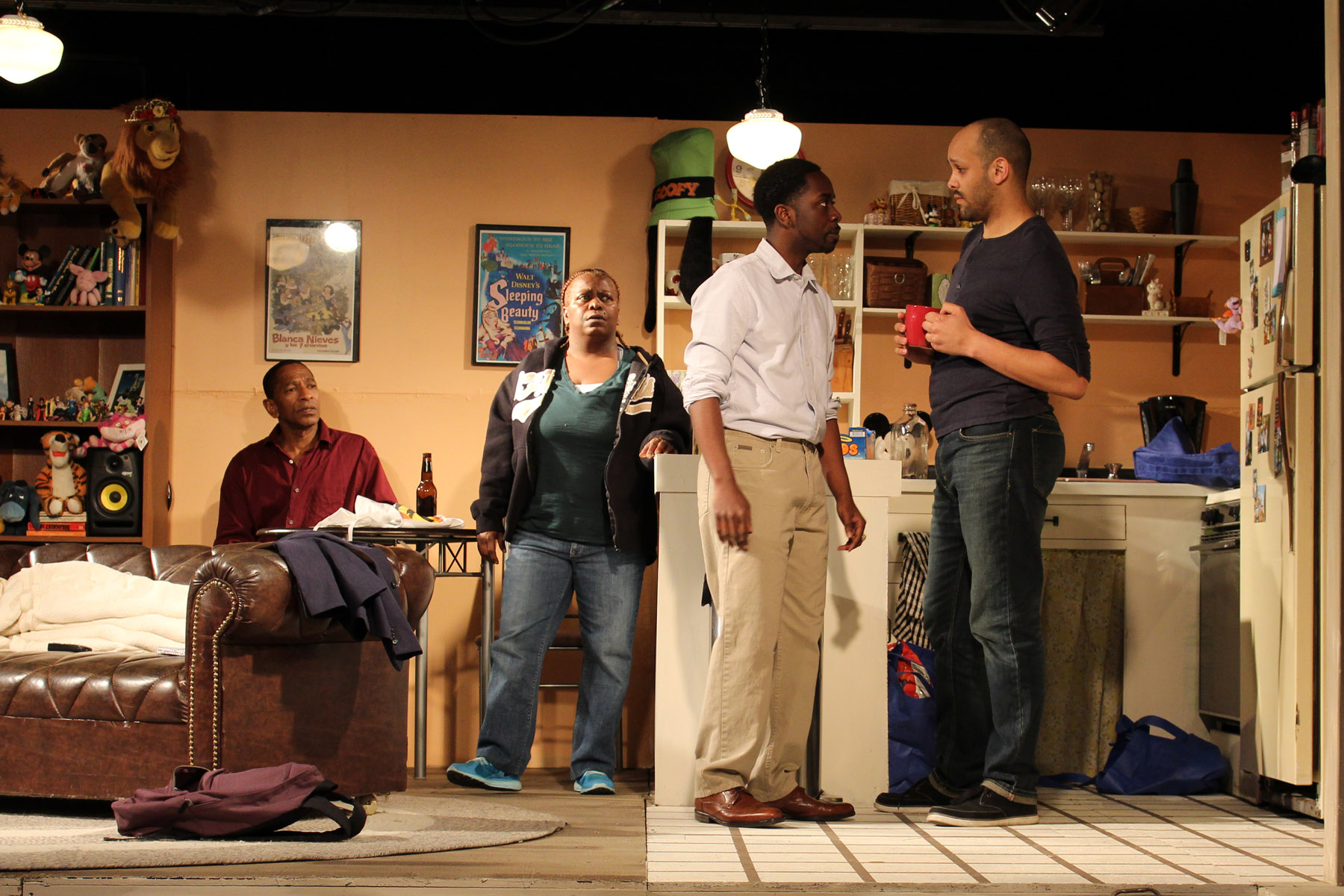 Kingdom, Broken Nose Theatre’s current presentation at the Den, is a thoroughly engaging and entertaining play. Directed by Kanomé Jones, it tells the story of a queer family (gay fathers, gay son, lesbian cousin) living in Florida shortly after that state legalized gay marriage. This forces the aging fathers, Arthur and Henry, to come to terms with very different opinions about whether they should get married now that they can. Meanwhile, their alcoholic son Alex is still suffering from his breakup a year earlier with NFL quarterback Malik, and Phaedra, Alex’s cousin, is struggling with her own relationship with her daughter and a desperate desire to see her grandchild, whom the daughter is withholding because she doesn’t like her mom’s “lifestyle.” And all of this plays out so close to Disney World that the old men have developed a tremendous affinity for All Things Disney (as long as you don’t include Star Wars), even decorating their house with Disney characters. This very funny play focuses on the relationship between Henry and Arthur and is notable because it has no agenda. This is no gay polemic: being gay is simply a fact of these people’s lives and the play isn’t political in any way other than its desire to see openly gay athletes in the NFL and other sports leagues. Further, though the characters are black, there isn’t even a hint of a subplot about racism; it just isn’t that kind of play. It is a sweet family comedy, really, albeit an unusual one that is occasionally raw in language and innuendo. Still, the show does have some issues, and I’ll try to enumerate them for you as we go along. 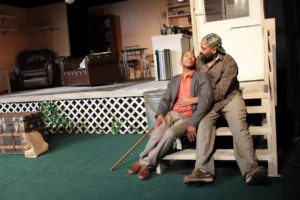 The center of the play is the relationship between Henry (Watson Swift) and Arthur (Christopher McMorris), the two old gay men who have been together more than forty years and suddenly have the opportunity to get married. Arthur desperately wants this; Henry is satisfied with the Civil Union status quo, and this causes a rift to develop between them, dragging Alex (Michael Majia-Beal) and Phaedra (RjW Mays) along for the very bumpy ride. Swift and McMorris put everything they have into the two men, who are fully fleshed out as individuals as well as a couple. Their Disney obsession is an odd quirk probably triggered by proximity to the park (where Alex works) and by the simple fact that at Disney World they can be themselves with no fear of judgment, and it almost immediately endears them both, especially Arthur, to the audience. (Anyone who loves Disney has to be a sweetheart, right?) McMorris is especially strong in characterizing a man who goes through several significant emotional changes during the show. (Watkins’ Henry stays on a more even keel.) 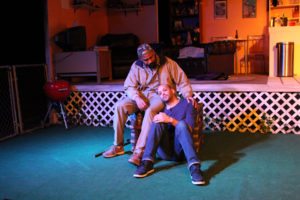 Majia-Beal also has some fine moments playing the love-lorn son. Alex has been moping around for a long time since Malik (Byron Coolie) left him, but that depression is reignited by the news (on ESPN) that the quarterback is getting married (to a woman). This knowledge—that Malik could move on so quickly and with such falseness—drags Alex back into a pain he feels he can only stave off by being drunk. His condition makes him pick fights with Arthur and with his cousin, and his conflicts drive the rest of the play that is not centered on the older couple. Majia-Beal, whose performance is otherwise very strong, does not play drunk well. Most of the time, in fact, he doesn’t even seem drunk; then he takes a forced stumble just to remind us. Even drinking, he doesn’t let us see the small moment of burn that straight alcohol inevitably creates; instead, he drinks it like water (which I’m sure is what it is). These elements pull us out of the story for brief moments, like the many line stumbles (most by McMorris), and remind us we are watching a play, after all, and these are actors. 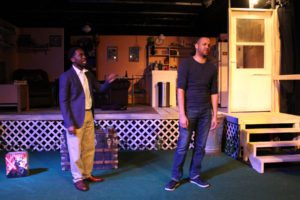 Perhaps more disconcerting, though, is a simple visual fact: Majia-Beal towers over Coolie, emphasizing the easily-seen information that the Doug Flutie-sized actor is extremely atypical for an NFL quarterback, especially a superstar one. (He might have worked as a placekicker.) Coolie’s performance is outstanding, and he has one powerful emotional moment with his face alone that is revelatory, but I just never believed he was a professional quarterback. I kept wondering why casting director Elise Marie Davis didn’t just switch the roles these two actors played; it would have been much more believable with Majia-Beal as the QB.

Perhaps the finest performance of the night is given by RjW Mays. Phaedra is wound up tighter than bark on a tree and is ready for a fight with anyone, whether verbal or physical. (The first time we see her she’s working out with a punching bag.) It is difficult to make a character likable while maintaining this kind of edge, but Mays manages it. Phaedra sees things more clearly than anyone else and doesn’t allow herself to get caught up in her uncles’ argument, so she ultimately becomes the voice of reason despite her edge. Later, with Phaedra allowed to be happier because of changed circumstances, Mays dives into that emotion with as much aplomb as she did to anger, and we see a Phaedra who cannot be brought down by anything…except maybe some careless makeup. At one point, after an offstage fight, Phaedra enters in a bloody and torn shirt…but without a scratch on her face or visible body. Similar carelessness occurs with Alex, who (after a terrible car crash) arrives onstage with a few bruises and a bandage around his head, looking more like a caricature of an accident victim than someone who has just gotten out of a hospital. At least he’s banged up though.

There are some other issues that can be attributed to the script, notable among them the Citizen Kane tantrum that Henry throws at one point. It isn’t so much that it’s impossible to see him acting as he does, but getting rid of all of his prized Disney memorabilia is so over the top that it seems utterly out of character and designed more as a symbol of the frigidity of the household than something someone would actually do. There is also the matter of alcohol still being located on the kitchen counter after Phaedra makes a big deal out of wiping out Alex’s booze supply. It’s there because it is needed later, but that fact seems to be sloppy writing.

So I had a few problems with the play, but on the other hand there is no denying that the production is a hilarious and occasionally powerful dramedy. Despite its issues, Kingdom has a heart the size of Cinderella’s Castle, and that is what is most important.