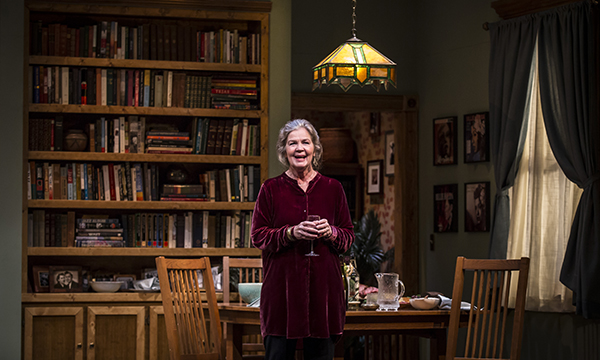 On January 11, 1954, Billie Holliday went to Copenhagen to kick off a European tour. At the airport, she met a young girl and her family. The father, a doctor, was concerned for Holliday’s health after hearing her cough, and insisted she come to his home office for medicine. The singer did so, staying not only for medicine but for dinner as well, as she wrote in Lady Sings the Blues. And that’s pretty much the whole story that playwright Dael Orlandersmith has fleshed out into a 90-minutes one-woman show starring Linda Gehringer, Lady in Denmark, now playing at the Goodman Theatre.

Orlandersmith is no stranger to one-woman shows. (Her last piece, Until the Flood, a one-woman show about the black experience in America, played the Goodman last spring.) Here, though, there is not a whole lot to dig into. She imagines the young girl as Helene, an old woman who has been through a lot in her life—love, death, marriage, rape, moving to America, etc.—and has now, at nearly 80, been left behind by her husband’s death from cancer. Orlandersmith is intelligent enough to know that a moving tale also needs humor, which appears in the form of the stuck-up girlfriend of one of Helene’s great nephews. And Gehringer is tremendous as she looks back on a simple life as it enters its twilight, a life with one great story in its center. But that’s the problem: it’s entirely too clear that this play was fashioned to tell that story of the encounter with Holliday.

When she tells that story (or when she is thinking of specific Holliday songs that had personal meaning to her), Helene comes alive. Gehringer’s eyes sparkle and everything about the character says “listen to me.” But the story of Helene’s life outside of that one remarkable moment (and the rape scene, which of course is painful) is just not that compelling. She has a “meet cute” story about her husband and one of Holliday’s tunes (“Them There Eyes”) and a tacked-on bit of agonizing empathy for American blacks as she thinks about “Strange Fruit,” and a few other moments linked to Holliday songs, but the moments are not all that fascinating.

Further, considering the effort Orlandersmith makes to connect Lady Day’s songs to Helene’s life, there just doesn’t seem to be enough of Holliday in this play. There are snippets of a dozen or more songs, but rarely do we even get to immerse ourselves in as much as a full stanza. The music that defines Helene’s entire life is here in bits and pieces, like briefly catching a memory, but we need and want more. Even if some of the music were here as underscoring it would be better: Helene can’t escape these songs and doesn’t want to, so we know they are always in her head, but they don’t have much time to enter ours. This is either a problem of the script or of Director Chay Yew, but it is a problem. As good as Gehringer is, this story needs more Holliday. Helene is a sweet old woman, and I liked spending time with her, but she is not interesting enough on her own to sustain an hour and a half monologue.

The technical aspects of this show are strong. Mikhail Fiksel’s sound design is excellent if underused. Andrew Boyce has created a lovely set featuring a long, sweeping staircase that Helene points out, in one of the play’s most poignant moments, that she now has to navigate alone every night. Lee Fiskness’s lighting is perfect but perhaps also underused: one can imagine a combination of lighting and music leading into momentary reveries that don’t come. Perhaps Orlandersmith and Yew have placed all of their faith in their solo actress, and as noted Gehringer is often very moving as she tells us the character’s life, but the play slows down too often, allowing the viewer to notice some odd inconsistencies. For instance, Helene has a monologue about how much she and her husband and friends loved smoking and the smell of cigarette smoke, yet when she twice lights up she never actually takes a drag on the cigarette before putting it out. Not only should this not be happening, but I shouldn’t be thinking about it while watching the play. Yet I was.

You may well enjoy Lady in Denmark quite a bit, and there is a whole lot to like in it. I just ended up wishing that a bit more attention had been paid to the second star of the show, and that we had been able to live more in Helene’s beloved music with her.

Lady in Denmark is now playing at the Goodman Theatre through Nov 18. Check the website for specific dates, times, and tickets. Find more information about current plays in our front page recs and at theatreinchicago.com.