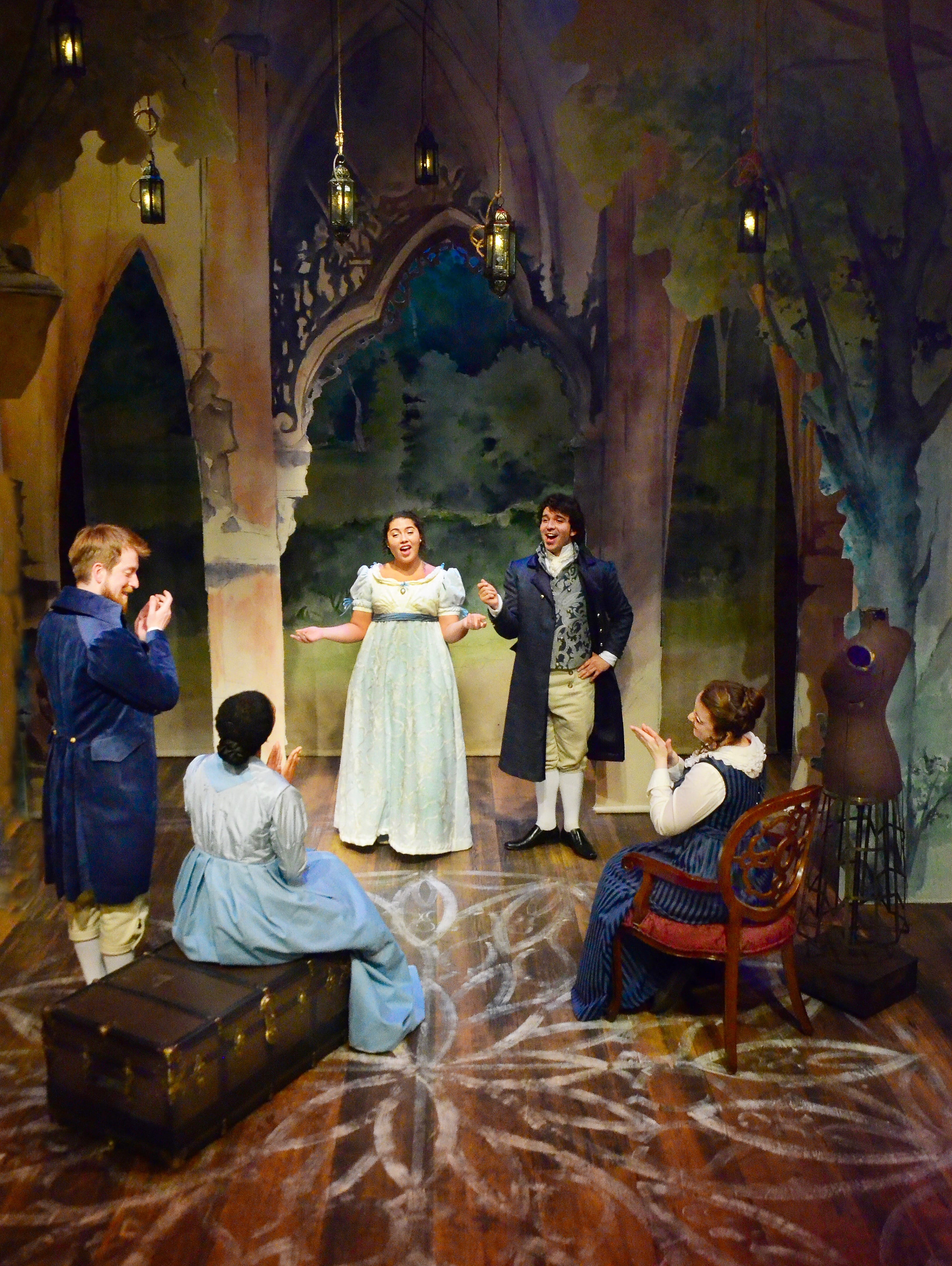 As a lifelong Jane Austen fan, I have always found Emma, the story of a young aristocrat whose well-intentioned meddling in the lives of everyone around her does far more harm than good, to be her most overtly comical book. Emma’s firm belief that she is an excellent matchmaker, based solely on one dubious success, gives this young woman a raison d’etre and carte blanche to try it again and again, making the most egregious mistakes and ignoring what is right in front of her in a very humorous satire of the upper class of the Austen era. Loaded with indelible characters and witty dialogue, Emma is Austen at the top of her game.

And then along comes Lifeline Theatre’s new adaptation of the novel, written by Phil Timberlake and directed by fellow ensemble member Elise Kauzlaric, which somehow manages to make the novel even more hilarious with creative characterizations, witty staging, and an inventive format that keeps the audience completely engaged while allowing the cast to strut their collective stuff. Timberlake and Kauzlaric have upped the comic ante by adding broad visual humor to the usual Austen mix. With a cast of only five portraying a dozen different characters, often trading off roles mid-dialogue even to the extreme of one actor having conversations with herself, this Emma is a brilliant and ebullient joy of a production.

It’s also a play that allows its ensemble to outshine its lead, even though Emma Sipora Tyler is excellent and expressive as Emma Woodhouse. But Tyler has only a single role to play and so does not get to venture into the outrageous and frantic role-switching that takes place elsewhere. Using only voice changes and exaggerated hand gestures (and a cane for Emma’s father), the other four performers play multiple roles irrespective of gender, costume, and which of them may have established the character. Timberlake’s script allows the simple expedient of direct address to keep them all straight, and the actors do the rest. The result is manic and marvelous, an Emma that pushes all the right buttons and manages to make a familiar story new again.

The ensemble is amazing. Maddie Pell plays Harriet Smith and others, and you couldn’t ask for a more flexible actress: as the play went on, I found myself able to distinguish her multiple characterizations in a millisecond based on her facial expression alone, even before I noted the playful physicalizations attached to each role. Cory Williamson portrays Mr. Knightly and others, allowing him to have much more fun than playing the internalized emotions of the “superior” man alone would give him. His rapid switches from Knightly’s stolid personality to various more broad and effusive characters is a never-ending delight. Similarly, Jeri Marshall’s calm, accomplished Jane Fairfax gives way to an over-the-top, extravagant portrayal of the singular Mrs. Elton. Peter Gertas, who plays both Frank Churchill and Mr. Elton along with others, is equally enjoyable in his rapid switches between roles.

This is not any kind of traditional adaptation, and Timberlake and Kauzlaric (as well as the cast) clearly had fun putting it together. The director had her work cut out for her: just keeping track of who was to play whom when must have required a lengthy spreadsheet, let alone envisioning ways to make the transitions work without getting repetitive and keeping the characters clear to the audience. There are many wonderful moments, such as Pell’s hilarious one-actor dialogue between Harriet and Miss Bates or Williamson’s stage left exit as the staid Mr. Knightly followed by what seemed an instantaneous stage right entrance as the loud and friendly Mr. Westin. Meanwhile, Tyler’s likable, focused presence as the title character holds everything together with her direct commentary on the action and her own slow self-discovery.

You don’t have to be a fan of the genre to enjoy this Emma. There are lovely period costumes by Ali Renee Amadei and period music by Andrew Hansen, but this is Austen for everyone. It is simply a joy to watch this play.

Emma is now playing at Lifeline Theatre, 6912 N. Glenwood, Chicago through July 14. Check the website for specific dates, times, and tickets. Find more information about current plays in our front page recs and at theatreinchicago.com.