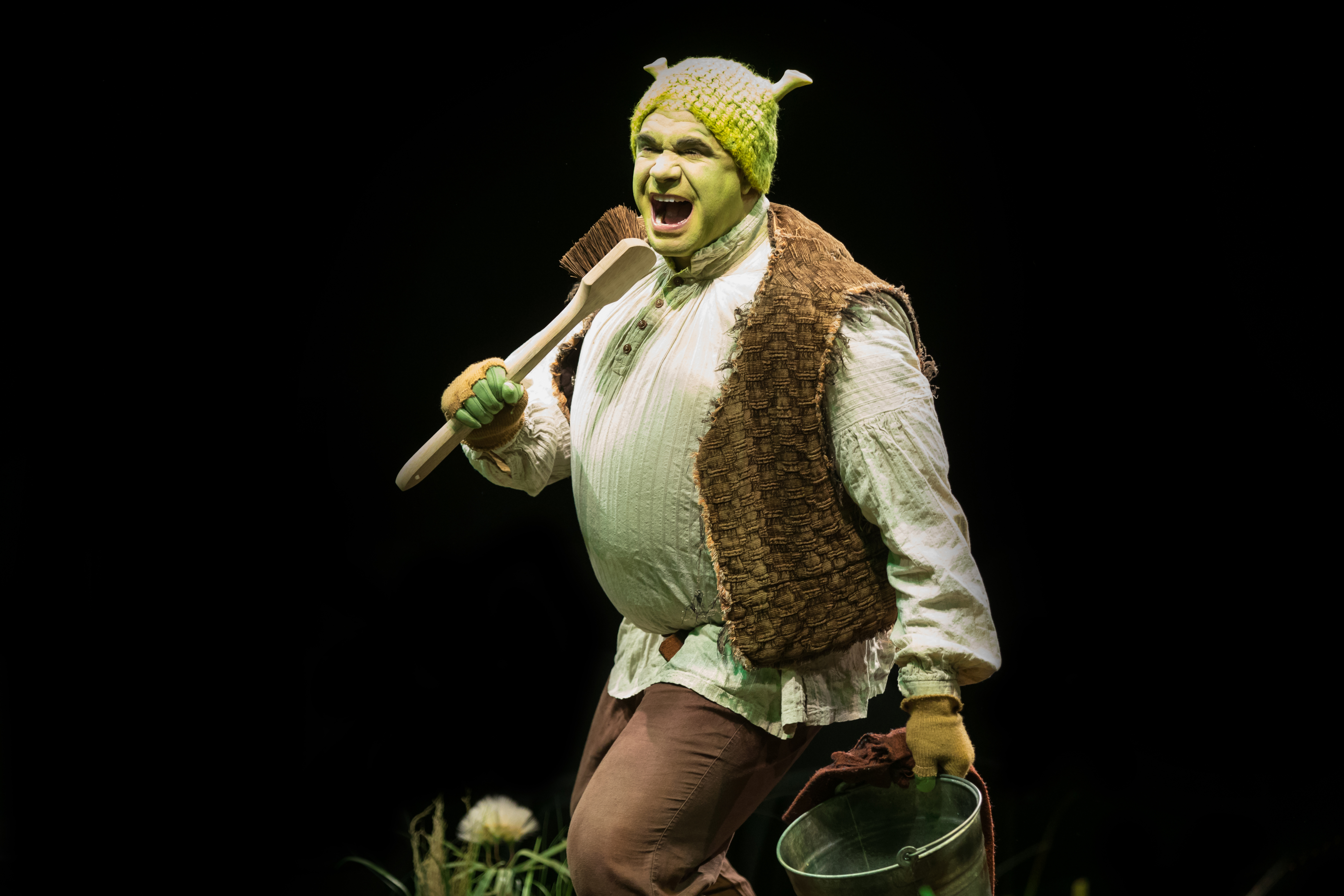 I’m not sure what I was expecting last Sunday when I went to see the Marriott Theatre’s production of Shrek: the Musical but I know that what I was not expecting was to experience a taste of Broadway in the Chicago suburbs!

Marriott's Shrek: the Musical is a production designed for younger audiences that takes the full-length Broadway show and turns it into a fast-paced 1 hour and 10 minute performance. Though I have not seen the full-length musical, I am very familiar with the original film and did not feel anything was lost through the cuts. We still meet the cranky ogre named Shrek who is content to live in his swamp alone. When his peaceful yet lonely existence is disturbed by a number of fairytale characters recently banished by Lord Farquaad, Shrek makes a deal to get his swamp back in return for rescuing a princess to marry Lord Farquaad. Joined on his adventure by Donkey, Shrek meets princess Fiona and finds they have a lot in common. The story was complete and easy to follow and most of the best-loved moments from the movie were there- including the moment when Shrek and Fiona fall in love through the sharing of flatulence. What child--or adult for that matter--doesn’t love that?!

From the moment the ensemble marched down the aisle and onto the stage for the opening number “Story of My Life,” I was blown away. It was obvious that even though the show had been cut in length, the designers spared no expense in bringing the Broadway experience to Marriott's theater in the round. In fact, with the intimate nature of the stage, the young audience got to feel even more connected to the story. All of the important technical elements of the show found their way into this shortened production. My favorite part was the brilliant and interesting costumes designed by Theresa Ham. In fact, I enjoyed Ham’s design of Shrek’s knit ogre cap as opposed to the hard mask of the original production as it made it easier for the young audience to connect with the green ogre. The props, designed by Kristen Martino, were also amazing. A tortured life-sized gingerbread man and the giant purple dragon requiring five puppeteers were just a few of the highlights. I also appreciated William Carlos Angulo’s choreography. It is always a different experience to choreograph for the theater in the round, and there wasn’t a bad seat in the house! My favorite moment was the 60’s style dancing of the knights chained in the dungeon during the dragon’s song.

Of course, costumes and props only take a show so far. However, the cast of Shrek was phenomenal. It was clear from the start, the actors were having a great time and that translated into fun for the audience. Shrek, played by Shea Coffman, was just the right amount of sarcastic, while still revealing the loneliness behind Shrek’s bite. Jacquelyne Jones’ Fiona was the perfect princess with a very important secret. Jonathan Butler-Duplessis’ Donkey was equal parts loveable and laughable. Steven Strafford provided a laughable villain who amazed me with his ability to maneuver on his knees throughout the entire production. Keirsten Hodgens blew me away as the dragon. And the energy of the ensemble! Every number they were in was fantastic- and they did a great job of creating real and interesting characters whether they were a banished fairytale creature, a Duloc citizen or an imprisoned knight. The ensemble filled the tiny space with joy. This was especially true in the number “Freak Flag.” I wanted to jump up and start dancing right along with the ensemble, but I restrained myself by clapping and cheering for the message that I hope every child in the audience heard- be true to yourself because what makes you unique is what makes you amazing!

After each show the audience is invited to stay for a talkback with the cast and crew where kids get to ask questions about the show and the experience of the performers. The most interesting thing I learned was that the cast spent only 2 short weeks in rehearsal. Director Scott Weinstein obviously inspired and led the cast to greatness in this short time. I left the theater singing, immediately bought the soundtrack and have been thinking about the show ever since. If you want to introduce a future theatergoer to a Broadway-like experience, find time to see the Marriott's production of Shrek: The Musical.