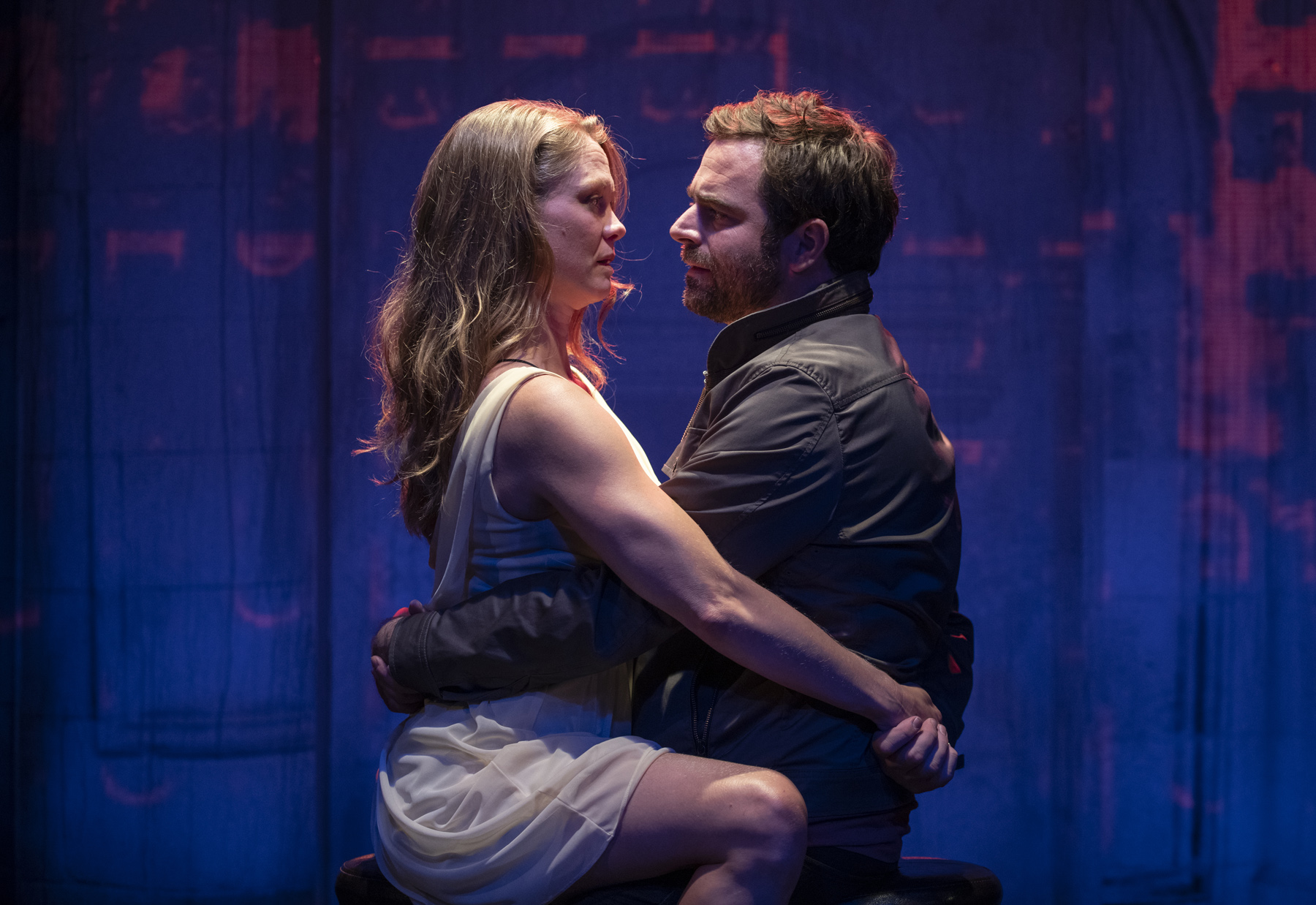 That was pretty much my reaction to the transcendent Midsummer (A Play With Songs) by David Grieg now playing at Greenhouse Theater Center in a joint production with Proxy Theatre. Showcasing the vast talents of the inimitable Chaon Cross (who seems to be everywhere lately) and the excellent Patrick Mulvey (who shared the Court Theatre stage with Cross as the lead in last spring’s The Adventures of Augie March), this very funny and inventive two-hander is easily one of the finest productions I have seen this year.

Randy White directs Cross and Mulvey as they portray, between them, sixteen different characters and play a combined five musical instruments in this idiosyncratic exploration of one of the all-time greatest “lost weekends,” in which Helena and Bob meet, drink a lot, have “wild, uninhibited sex,” and spend 15,000 pounds that Bob has stolen from his boss, the leader of an Edinburgh crime syndicate. (Did I mention that, in addition to everything else, Cross and Mulvey had to learn Scottish accents?) And if that isn’t complicated enough, the play, which is punctuated throughout by songs from Gordon McIntyre that range from sweet and contemplative (“Love Will Break Your Heart”) to borderline pornographic (“The Song of Bob’s Cock”) to just plain silly (“The Hangover Song”), is told in a non-linear fashion that often restarts to show the same moment from a new perspective.

This is a play that shares a gene pool with the musical Once but is both rowdier and much blunter. The lovely and gentle emotional connection between the leads of the musical gives way here to vibrant physicality. The raucous sex scene between Bob and Helena that sets the stage for their whirlwind weekend together is both intense and hysterically honest (and White handles it brilliantly). The actors also chase each other all around the theatre at one point, leaving them winded and the audience laughing. Cross and Mulvey certainly get their workouts in this show.

Both actors are outstanding in their portrayals of the two characters whose paths cross and who end up changing each others’ lives. Helena is a lawyer whose personal life is a complete mess, while Bob is a small-time criminal who, at 35 years old, seems to be permanently relegated to the role of gofer for boss “Big Tiny Tom,” who calls him “Medium Bob,” a moniker that probably says everything you need to know about this character’s essentially empty life. When Helena comes onto him at a local bar (after her married boyfriend cancels their date), neither has the foggiest notion of what will follow.

Grieg’s script is creative in a chaotic way, reflecting the unplanned nature of Bob and Helena’s crazy weekend. It bounces back and forth between their points of view, pausing only long enough to allow a scene to take shape before moving somewhere else. This 90-minute play has scenes set all over Edinburgh spread across three days. If, like me, you love that Scottish city, you’ll find extra pleasure in all of the locations the play conjures up as Bob and Helena experience them. From the top of Arthur’s Seat to the inside of a fetish bar, Grieg packs the play full of memorable moments. It never gets confusing, though: despite many side-trips, the playwright never loses sight of the central story.

The flexible set, designed by Mark F. Smith, allows all of these scenes to take place seamlessly, while lighting designer Brandon Wardell and projections designer Anthony Churchill (who also designed the sound) help keep the unit set active. Director White maintains a very quick pace throughout the show, again reflecting the frenetic events of the weekend; he slows down only for the musical interludes directed by Jeremy Gentry, which are all wonderful.

This remarkable play is one of the best surprises I have had this year in Chicago theatre. I can’t even do justice to the immense joy it engendered in me. (Seriously, I can’t: any attempt to describe clearly what happens in this play would spoil it, and I wouldn’t want to do that.) Suffice it then to say that Midsummer (A Play With Songs) at Greenhouse is a show you don’t want to miss. It is a hilarious and imaginative paean to the idea that we are never stuck in life: no matter how hopeless, dull, or repetitive our lives might seem, change is always possible.

Midsummer (A Play With Music) is now playing at Greenhouse Theater Center, 2257 N. Lincoln, Chicago through Oct 6. Check the website for specific dates, times, and tickets. Find more information about current plays in our front page recs and at theatreinchicago.com.