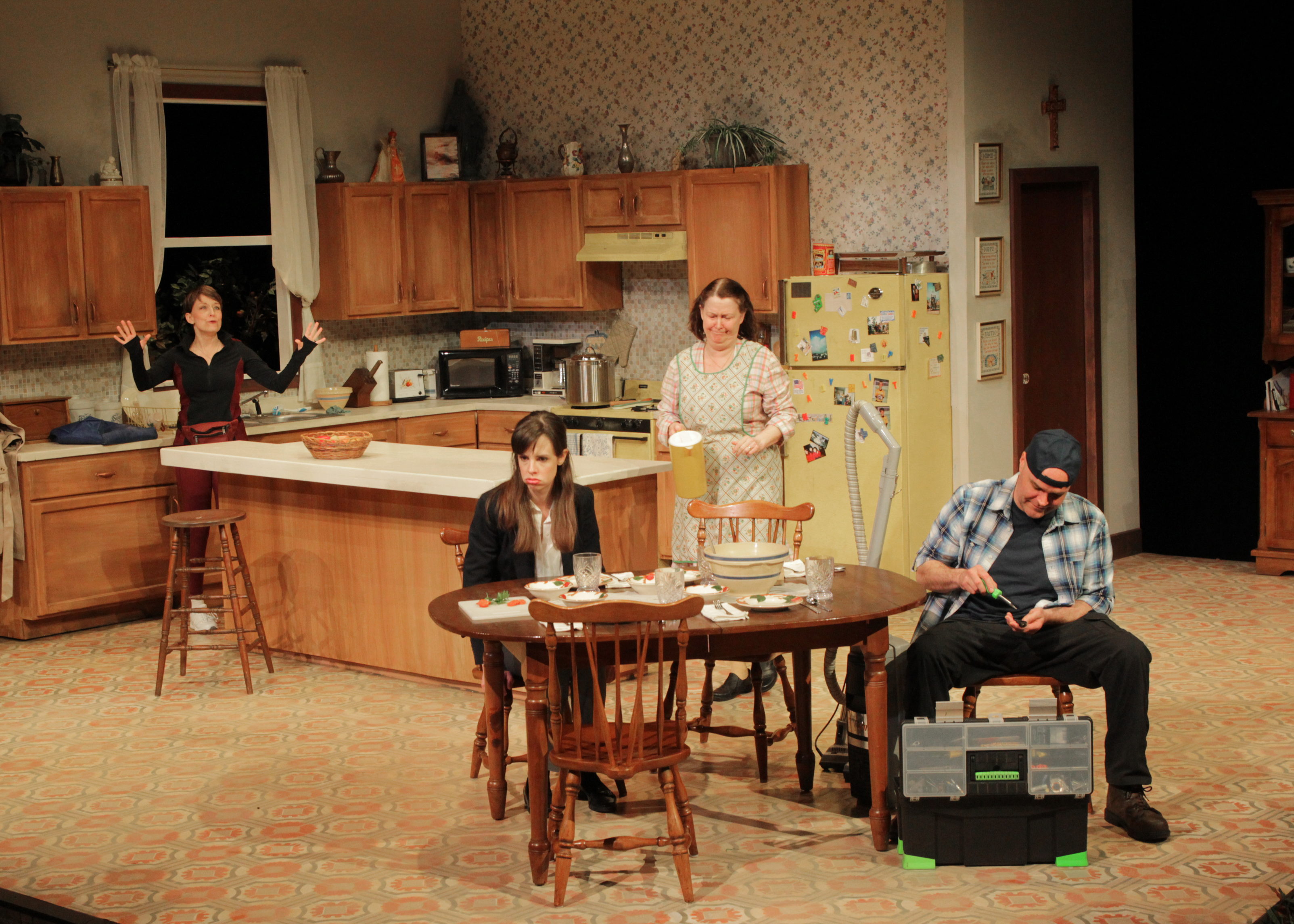 Every family has its legends and its secrets, part of the public or hidden lore of generations struggling to adapt and survive. Sometimes these are held tight in the memory of only a few family members; sometimes they are well-known. In Tom Dudzick’s very funny Miracle on South Division Street, the Nowaks of Buffalo, NY have a legend of their own, embodied in a twenty-foot-tall statue in their front yard commemorating a visitation of the Blessed Virgin Mary to the family patriarch’s barbershop shortly after their arrival from Poland in 1942. Though the Catholic Church has not seen fit to put its imprimatur on the event, the Nowaks, especially Clara—whose late father actually experienced the vision—have dedicated their lives to keeping its memory alive. And the statue, over the years, has become a kind of minor tourist attraction in the decaying neighborhood: visitors are treated to the tale of the visitation by one of the family members and often leave an offering. But when Ruth, the family’s youngest daughter, decides to tell the story in a one-woman play, secrets are revealed that rock the family to the core.

Steve Scott directs this family comedy about the people who find themselves faced with these difficult revelations. Dudzick’s humor is gentle but consistent: he’s funny because these people are all very familiar. We recognize the sibling rivalries, the sometimes difficult relationship between the generations, and even the oddity of the statue; after all, don’t most families have something that sets them apart? That the Nowaks have one that everyone can see is unusual, but it’s also a thing that helps to define them. Clara (Millie Hurley) is constantly after her grown children to deliver their statue speeches with more enthusiasm—something like that would certainly grow deeply repetitive over time—because this is what makes them special: they were “chosen,” as she reminds them, for this miracle. She’s lived her whole life focused on that single fact; today she runs a soup kitchen and advertises her soup as “made on holy ground.”

The younger generation have differing points of view about the family legacy. Oldest daughter Beverly (Kelli Walker) is easily the most inculcated into the importance of the miracle. Though she has her own life—and has recently met a potential husband in the form of a former seminarian—she has no issue whatever with coming home to do her duty regarding the statue. Middle child Jimmy (Nick DuFloth) looks at the statue—as he looks at pretty much everything—as just another part of being a Nowak. It’s a weird thing that has always been there, and he’s willing to do his part, but it is not deeply embedded in his persona. (He’s iconoclastic in other ways as well; for instance, he wants to propose marriage to a Jewish girl, something his very Catholic mother firmly opposes.) Both Walker and DuFloth bring strong energy to their characters: Walker is practically manic at times and very protective of her mother and the miracle, DuFloth is laid-back, allowing life to wash off his back, allowing his very expressive face to react to the evening’s goings-on.

But the central figure of the children is Ruth (Rebecca Cox). The youngest, and an aspiring actress, she has discovered things about the miracle that she needs to share with her family, things that will change how they see themselves. Dudzick is very interested in exploring how much of who we are is tied up in what we think we know about ourselves, and Ruth, who has called a family meeting to discuss what she knows, understands its importance. Cox is an appealing actress who takes advantage of the built-in exasperation of the moment, along with normal sibling banter and the clear history they all share, to find all sorts of humor. Ruth is well aware she’s about to pull a rug out from under her family, but this still is a family, and Cox, Walker and DuFloth respond to each other exactly as one would expect siblings to: with both love and antagonism. As to Hurley, she is the ground they travel on, Clara’s deep belief in her father’s miracle securing who they all are. Hurley is very funny in her sheer seriousness about it, and it is easy to see how much of who she is might collapse when the truth is revealed.

Scott’s direction keeps these characters fully invested at all times, and his brisk pacing brings the show in at under an hour and a half despite a very unfortunate scene change Dudzick sticks him with at the eleventh hour. He also succeeds in keeping the comic aspects of the play firmly in the forefront when it would be fairly easy for the revealed secrets to derail them. You might find Miracle on South Division Street a bit contrived, but you will also find it pleasantly funny. It may not be the most compelling play in the world, but these actors and this director make the Nowaks worth visiting, even if you have to travel all the way out to College of DuPage to do so.

The Miracle on South Division Street is a Buffalo Theatre Ensemble production now playing at the McAninch Arts Ctr, College of DuPage, 425 Fawell Blvd, Glen Ellyn, through June 2. Check the website for specific dates, times, and tickets. Find more information about current plays in our front page recs and at theatreinchicago.com.