A Moon for the Misbegotten by Eugene O’Neill is often a problematic play to produce because it depends so much on the character of Josie Hogan. The tragic figure, Jim Tyrone, may be the ostensible main character of the show, but Josie, who is onstage for almost the entire play, is a powerhouse of a figure that too many productions get wrong. No wonder: O’Neill created a virtually uncastable character in Josie: 5’11”, big-boned, and buxom, she must tower over most of the men in her life, able to overwhelm them with anger or, for the right man, maternal love. In Bethany Thomas, Writers Theatre has found an almost ideal Josie. And it isn’t just her physical appearance, though that works perfectly. Thomas has all of the necessary acting chops to create this complex woman who masks her loneliness with bravado and self-deprecation that itself masks as braggadocio. At the center of the action in this haunting, often hilarious play, Thomas brings this larger than life character down to earth. 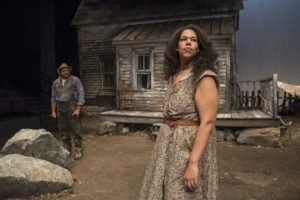 Thomas’s casting would not have been possible had not director William Brown and Writers Theatre made the decision to turn the Hogans, an almost stereotypical Irish clan in the O’Neill script, into a black family. The result is a very different version of the play than we usually see, but what becomes immediately clear is that the struggles are precisely the same. The tenant farmer, Irish or black or whoever, is always in a struggle to meet his obligations. In this play, Brown has the marvelous A.C. Smith to work with as Phil Hogan, Josie’s father. Smith’s Phil, every bit a match for the performance of Thomas, is a volatile schemer, as ready for a fight as he is for a drink, and always thinking of new ways to get back at someone. His presence throughout the play looms over the situation, and we are forewarned that it will by the defection of his three sons, the latest being the picked-upon Mike (Cage Sebastian Pierre). None of the boys can stand to be with him; it’s only Josie who has the strength, stamina and wit to match her father. We see a brilliant and wonderfully funny example of this in their takedown of rich neighbor T. Steadman Harder, comically portrayed by Eric Parks, in Act One. When these two are on your bad side, watch out. 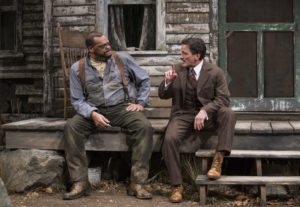 Jim DeVita’s Tyrone, the embodiment of O’Neill’s older brother Jamie, is also a schemer, to an extent, but his schemes play out as practical jokes, the most robust of which is the notion of selling the land on which the Hogans live to someone else. But as he seeks to get Phil’s goat with that, we get to see that he has more depth of character than he lets on. And it’s his honest love for Josie along with his guilt over a less than savory past that set this play up to be more than the riotous comedy it seems at its start. DeVita gives Tyrone a pathos necessary to stop this from becoming melodrama, and his performance as the seemingly doomed alcoholic is alive with contradictions and pain. As we watch his confession to Josie in Act Three, we see a broken man who believes himself unable to love with all of his heart. DeVita imbues the drunken character with a kind of honor he doesn’t believe he possesses, and even though Tyrone is prone to sudden self-loathing outbursts, we feel for him. 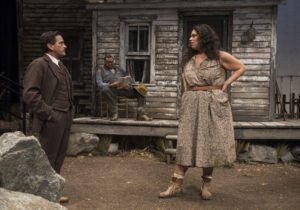 It’s the relationships among Josie, Tyrone and Phil that create both the humor and the melancholy of this play. The first two acts are focused primarily on that more playful side of O’Neill in jokes which Thomas and Smith dole out by the bucketful in wordplay, physical comedy, and confrontational humor that borders on farce. In the final act, though, which takes place during the course of a long night, we discover the truth about both Josie and Tyrone (and even Phil), and the beauty of the performances here has little to do with humor. Both central actors allow us to feel the pain of their characters in a scene culminating with love and forgiveness instead of the violence and ugliness that we might expect in other O’Neill dramas. Here he clearly desires to show us his softer side and expiate his own guilt over the fact that he never visited his brother in the sanitorium in which he died. (There is even a John Keats quotation to suggest Tyrone’s lack of a future, “Now more than ever seems it rich to die,” further linking him to Jamie O’Neill.)

Todd Rosenthal’s set for this play is a very realistic dilapidated farmhouse on a worn bit of land. It is enhanced by extraordinary lighting and sound from Jesse Klug and Andrew Hanson and costumes by Rachel Anne Healy that, in and of themselves, define the characters who wear them. Director Brown keeps the pace quick, but the play still runs three hours due to two long intermissions. It’s a long night’s journey, but one well worth seeing for many reasons, not the least of which is the compelling performance by Thomas. I can’t help thinking that she is precisely the Josie the playwright envisioned, even if he could not have known that.

A Moon For the Misbegotten is playing at the Writers Theatre, 325 Tudor Ct, Glencoe through March 18. Tickets are $35-80