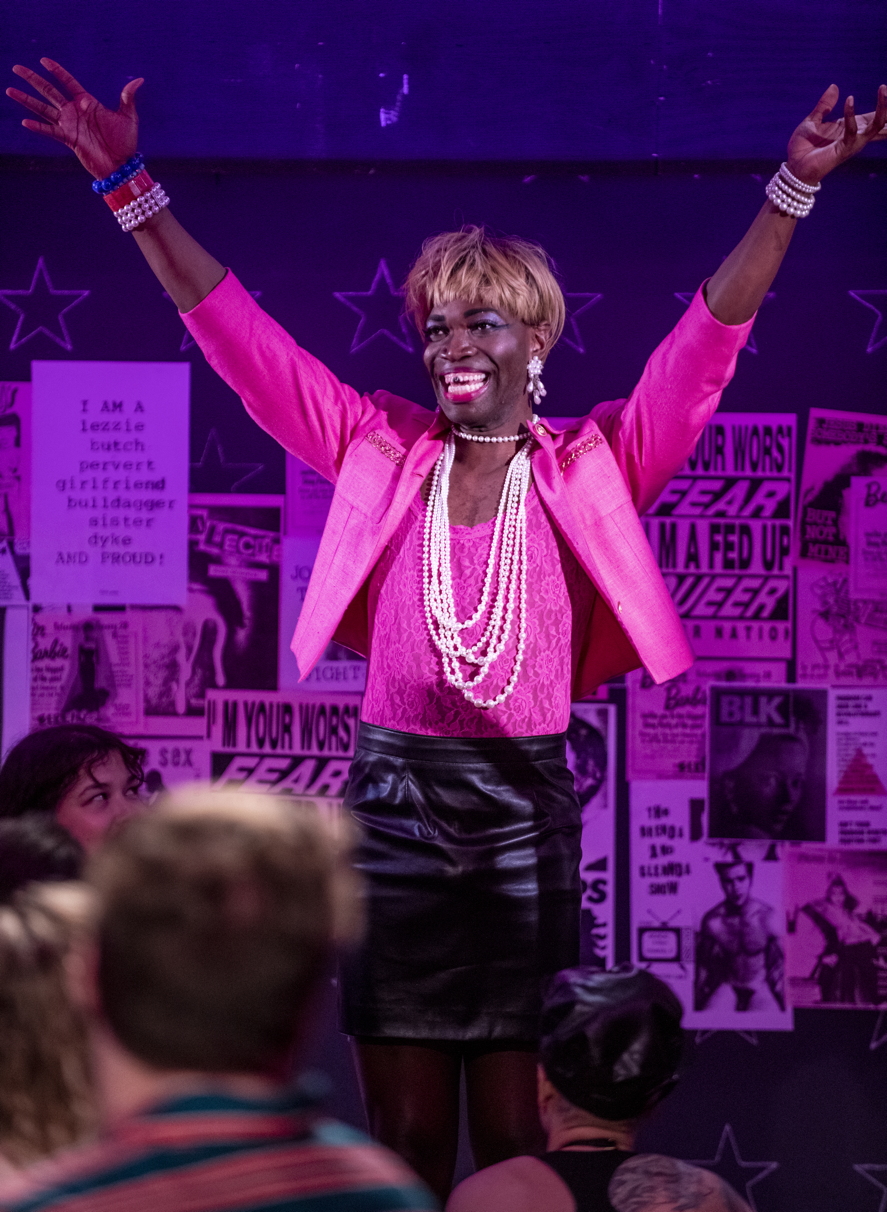 It’s a little bit difficult to review Steppenwolf’s latest production, Ms. Blakk For President, not because I don’t know if I liked it (what’s not to like about this festive, celebratory immersion into Queer history?) but because it’s hard to say exactly what this show is. It’s not really a play in the normal sense, and it doesn’t attempt to be. Even its promotional material refers to it as “part campaign rally, part nightclub, part confessional, and all party,” which is about as apt a description as I think is possible.

Inspired (“but not bound”) by a true Chicago story, Ms. Blakk For President introduces us to Joan Jett Blakk, the drag alter ego of Terence Smith (played by co-creator Tarell Alvin McCraney), who ran for mayor of Chicago against Richard M. Daley and then, in 1992, ran on the Queer Nation Ticket for President of the United States. Neither political campaign was serious (the fictional Ms. Blakk here describes it as a “joke”); what Blakk and the fledgling Queer Nation activist group really wanted to accomplish was to bring political attention to queer people and to the scourge of AIDS, which had been rampaging through the community for over a decade but was largely ignored by Washington. Managing to get all the way to the floor of Madison Square Garden and the Democratic Convention, they succeeded in getting Bill Clinton to put a mention of the issue into his speech, which was a significant accomplishment.

The show, which actually begins with pre-show performances half an hour before opening, takes place in an Upstairs Theatre transformed into a “party space” consisting of a long runway lined with a bunch of cabaret tables and a couple of couches for those who want to join in the action. (There are also, of course, regular theatre seats on both sides.) On opening night, not only was Smith there himself, but Mayor Lori Lightfoot and other dignitaries showed up as well, our first gay mayor paying tribute to a little-known but important piece of queer Chicago history. The house was rocking, a full theatre enjoying the dancing, the singing, the spectacle, and—oh yes—the play.

Steppenwolf ensemble members Tina Landau and McCraney built this show from scratch, and the hybrid form it now takes is, according to Landau, “just the natural way it was born and breathes.” In whatever way it happened, the show evolved into a raucous party with a storyline embedded in it. The tiny ensemble of five actors (which includes Patrick Andrews, Molly Brennan, Daniel Kyri, Jon Hudson Odom, and Sawyer Smith) take on roles from Blakk’s actual campaign as well as characters such as a spectral drag Marilyn Monroe, in addition to entertaining with dance, spoken word poetry, etc. Landau’s direction, though, keeps it all from veering toward chaos: she knows the story she is telling and, no matter how crazy things get, returns us to it with the snap of a finger.

McCraney is a highly sympathetic Blakk/Smith. As Blakk, he is bold, loud, and proud. As Smith, who in real life is actually something of an introvert, he shies away from confrontation. Both halves of his character work well, but they are also at odds with each other, especially in the climactic moments in New York. A lengthy scene in which Smith is transforming into Blakk in a Madison Square Garden men’s room reveals this dichotomy well and adds layers of character that we don’t really see much of elsewhere, as the focus is on the campaign.

This play doesn’t dig deeply to discover who Smith was in 1992, and the version of Joan Jett Blakk that it presents is somewhat caught in amber: it is a strong and enjoyable creation but appears whole without any buildup. We don’t know why this drag queen decided, for example, to take on this kind of activism instead of simply continuing to perform at clubs. But we do hear that activism come alive in an alternative version of the “speech” she gave on the floor at MSG, and we hear how deeply Smith/Blakk cared about the issues troubling LGBT people at the time.

So, what is Ms. Blakk For President? A play? A party? A polemic? A proud look down memory lane? The answer is that it is all of these things at once (with the polemic part thankfully kept in check). As Pride month begins, Steppenwolf shines a rainbow light on this small but important piece of LGBT history, and invites the audience to help them to celebrate. Whatever else Ms. Blakk may be, it is joyous and infectious. And don’t miss the pre-show; you’ll be sorry.

Ms. Blakk For President is now playing at Steppenwolf Theatre, 1650 N. Halsted, Chicago through July 14. Check the website for specific dates, times, and tickets. Find more information about current plays in our front page recs and at theatreinchicago.com.