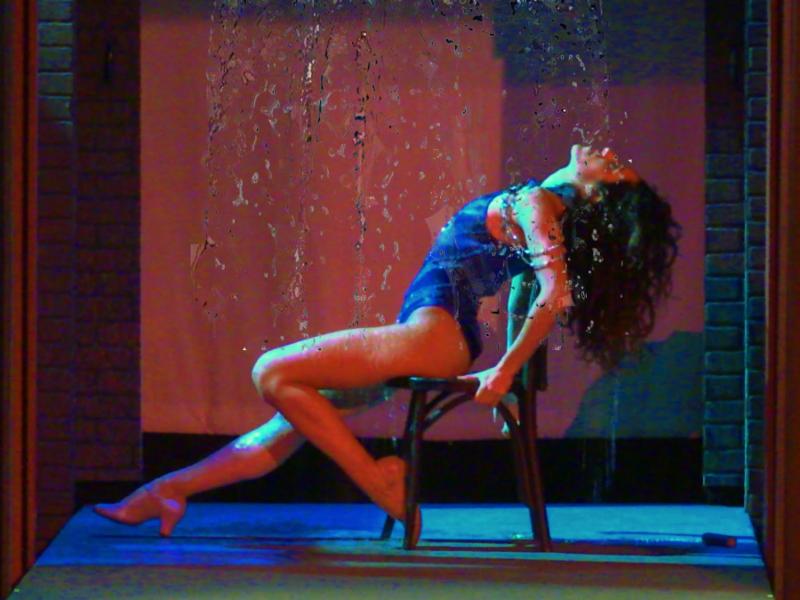 Flashdance is a feel-good musical presented by a fresh-faced, young, nubile and rather charming cast but burdened by clichés. Neither the skilled performers nor the fast-paced story is enough to insure success. The rapidity of pace destroys continuity, and the cast certainly transcends this script-- and deserves better.

So much singing... so much dancing...so many people crowd the stage -- whether or not there is any plot reason for their being there. It is all overwhelming.

The plot may be no sillier than that of many musicals, but it is oh so painfully predictable. Factory welder and nightclub performer Alex Owens (Abby Perkins) wants to study dance and must face a dreaded audition. Nick Hurley (Devon A.A. Norris), the handsome son of the factory owner, wants to change workplace economies and prevent layoffs. Both are ambitious, both struggle against obstacles, and -- spoiler here -- they succeed individually and as a couple. Whew -- the audience need not have worried.

A secondary plot echoes the same theme as dancer Gloria and would-be comic Jimmy (Emily Senn and Steddy Amory), triumph in romance but not professionally. Oh well, you can't have it all, and romance is the glue of theater. Amor Vincit Omnia.

High praise to Director Paul O'Donnell for casting Abby Perkins in the lead. She is charismatic -- always the focus no matter how many other characters fill the stage. Her talents include vivid personality, powerful voice, great dancing in a variety of styles, many of which are quite acrobatic, and the chemistry she and Norris create. Her performance alone may be worth the price of admission.

Praise also to set designers Jodi Dellaventura ad Natalie Torres who created a two level set which is bookcased between two flights of stairs -- one spiral -- which the actors scamper up and down as they move between scenes: the Factory, Harry's Bar, the Chameleon (a seedy lap dance place) and the prestigious Shipley Academy of Dance. We also visit Alex's loft and the apartment of a Hannah (Fern Katz), a retired ballet teacher who acts as Alex's mentor. The sheer physical effort demanded of the actors deserves credit.

The tunes are catchy and the score contains 14 original songs in addition to other more familiar ones from the 1983 movie, including “Flashdance...What a Feeling,” “Maniac,” and “Gloria."