As a former English teacher, I was certainly looking forward to Black Button Eyes Productions’ latest play, Nevermore: The Imaginary Life and Mysterious Death of Edgar Allan Poe. I had no idea what I was about to witness. Bookended with scenes of Poe in bed dying—thus making the entire play a kind of fever dream—Nevermore plays out more as a light opera than a musical, with soaring vocals, recitative narration, exquisite costuming, dynamic choreography, brilliant stage movement, and some of the finest performances, direction, and sound design you are likely to get anywhere in the city. It is a show unlike any I have ever seen before, and one worthy of the macabre and unusual world of its subject. 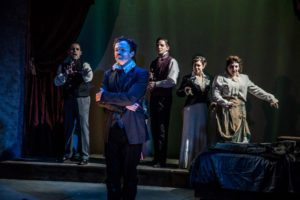 This is a tale within a tale within a tale. Our first layer is Poe’s deathbed. As we enter his dream, we see him standing on the deck of a ship, where he is about to meet a troupe of players who will invite him in for the evening. It turns out that he is traveling to Boston to see his fiancée and get to a job interview, but it is a chill night and they are all fans, so they prevail upon him to stay awhile. The third layer, the one in which we spend the most time, is the one that provides the play’s subtitle: the players regale Poe with the story of his own life, cleverly woven in an attempt to connect events of his life with eventual plotlines from his poems and stories. (He imagines his dead mother is still alive in her coffin; a girlfriend tells him a story not unlike “Annabelle Lee”; his adopted father has a bizarre eyepatch that clearly is meant to trigger the “vulture eye” in “The Tell-Tale Heart,” etc.) Sometimes the connections work well; sometimes they are wedged in almost painfully (like a “The Black Cat” reference). It’s a noble goal, though, and does provide a lot of visual fun in the play. 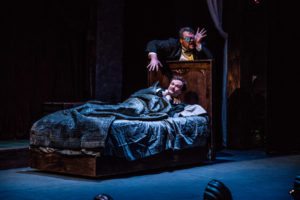 Kevin Webb plays Poe, for a long time, as a child, fearful of everything in the new, giant house of the Allans, where he’s been sent to live. In one brilliant visual taking place in young Poe’s bedroom (the “Metzengerstein Room,” according to Fanny Allan, his new stepmother, the name evocative of an early Poe tale featuring a mysterious and terrifying horse), the room’s horse tapestry comes alive while his stepfather runs around like an ape, showing his glowing vulture eye, and a black Death figure swings his scythe back and forth (the grandfather clock in the hall), scaring the child out of his wits. Webb is great at finding those childhood fears, but he really shines when given the chance to grow up. His beautiful singing voice is compelling as he compares his future artistic self to one of God’s angels in “Izrafel” and throughout the show. He’s also a fine actor and dancer; his dance sequences with Megan DeLay’s Elmira are a highlight in 19th Century cultured simplicity, and both actors seem to be having a great time. 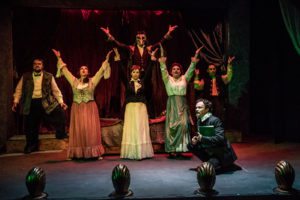 DeLay, too, is remarkable. This is the one relationship in Poe’s life that should have worked—they were well-matched—and the pure joy in her slightly twisted performance is palpable. Of course, she’s not the only one. Each of the six ensemble members—who also include Jessica Lauren Fisher, Ryan Lanning, Matt McNabb, Maiko Terazawa, and Jeremy Trager—all of whom play multiple parts, is perfectly cast. Their operatic voices are able to interpret the material in Jonathan Christenson’s score with sometimes thrilling results, but they are also able to blend beautifully when they are called upon to do so, as in the haunting “The Raven.” McNabb is a strong and powerful presence in every scene he is in. As an ensemble member he is frightening; as Jock Allan, Edgar’s stepdad, he is imposing and intractable. Slinking around the stage and providing a kind of snakelike counterpoint to McNabb is Trager, whose recitative is always accompanied by the most sinister movements possible. Compared to them, Lanning seems a kind of angel, which seems fitting since he plays the good Henry Poe, but even his ensemble roles are less ominous than the other men. As for the other women, Fisher is wonderful in several roles including Eliza Poe, while Terazawa exudes a kind of straightforward ebullience in her major roles that probably explains why they chose her to voice the puppet model of the ditzy girl that Poe married.

As far as production goes, this play is solid. The four-piece band under the direction of Nick Sula provides incredible depth to his orchestrations (based on the originals). Sound design, an often overlooked element of theatre, is critical here, and Robert Hornbostel is right on whether he needs footsteps on tile or the last gasping breaths of a dying man. Derek Van Barham’s choreography is so strong and fluid that the actors seem to be making some of their bizarre moves and gestures up on the spot…in unison. Rachelle “Rocky” Kolecke’s puppets are outstanding. And Ed Rutherford pulls it all together beautifully, taking all of these disparate parts and crafting a powerful, haunting whole.

It isn’t a perfect play, but the fault lies in Jonathan Christenson’s script, not the production on display at The Edge Theatre. Christenson is a bit long-winded in spots and overly fond of his own anapestic meter, with the result that things can feel a little sing-songy and dull at times despite the best efforts of the players. And his tendency to run narrative right through songs feels like a mask for a lack of faith in his own ability to craft good ones. (Here there are only a few that stand out. Most of the rest blend into the narration and recitative.) But the fine performers both onstage and off have done such a great job of delivering a show that pushes the envelope of expectation and creates visual, narrative, and musical excitement in so many places that we can overlook the playwright’s foibles. If Poe fascinates you—and if he doesn’t you’re probably not reading this—do whatever you can to see Nevermore. A word of advice, though: if anyone offers you a cask of Amontillado…settle for hot tea instead.

Nevermore: The Imaginary Life and Mysterious Death of Edgar Allan Poe is now playing at The Edge Theatre, 5451 N. Braodway in Chicago, presented by Black Button Eyes Productions, until January 28. Th-Sat 7:30 PM; Sat 2, Sun 3. Tickets are $15-30 and are available from Black Button Eyes. No half-price tickets are available. Find more information about current plays on our Current Shows page and at theatreinchicago.com.