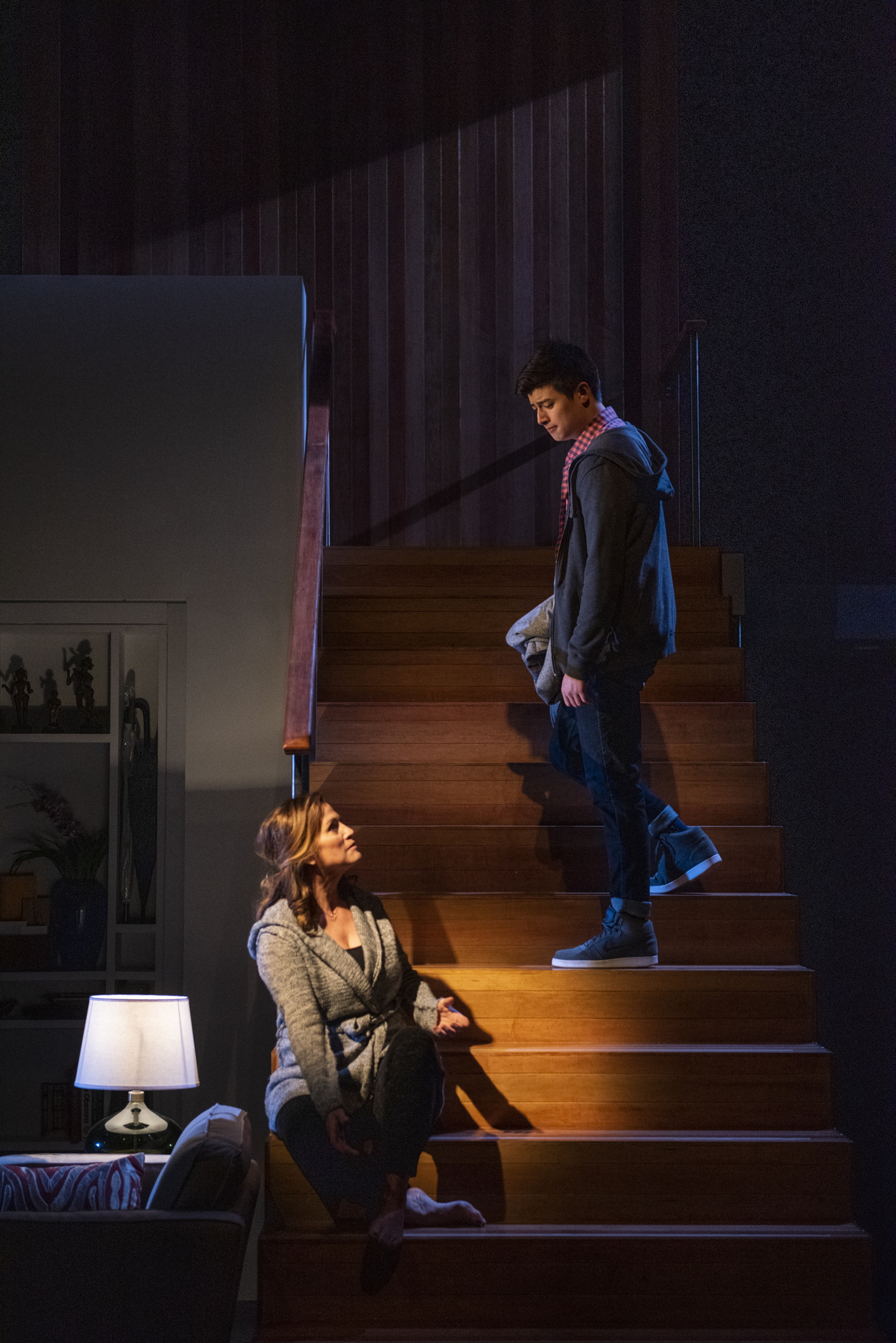 What do you get when you pair a Tony Award-winning director and a great cast with a Pulitzer Prize-winning musical that happens to be one of my all-time favorites? You get one of my favorite plays of the year: Next to Normal at Writers Theatre in Glencoe, which is quite simply the best production of this play I have ever seen. David Cromer, the veteran director from Chicago who has won multiple awards including the Best Director Tony for 2017’s The Band’s Visit, returns to Writers for this production and helms a brilliant, poignant, powerful journey into the lives of a woman suffering from bipolar disorder and her family, who have been forced to suffer along with her.

If you think that is an odd topic for a musical, well, you may be right, but writer David Yorkey’s and composer Tom Kitt’s emotional rock musical has never felt so personal than in Cromer’s able hands. Using every bit of the lovely and versatile Regina Garcia set as well as the aisles and stairs of the theatre itself, Cromer brings the play into the audience, highlighting one of the show’s most important messages: this kind of thing can happen to anyone.

Diana Goodman (Keely Vasquez) has been suffering from mental illness since the death of her eight-month-old son seventeen years ago. The family has had to put up with many public meltdowns as well as her (mostly private) hallucinations of her now teenaged son Gabe. Various attempts at psychotherapy and psychopharmacology have proven fruitless: nothing seems to help her condition. Vasquez brings the character’s suffering painful new dimensions, rivaling the levels reached by Alice Ripley in the original Broadway production. Whether she is playing a quiet scene with her daughter or husband or frantically trying to get her latest doctor to see her desperation, Vasquez’s urgent performance digs deep to find the highs and lows engendered by this disease. One of my favorite moments is a very quiet, very subtle one: desperately trying to remember something missing from her life after electroconvulsive therapy, she opens the door to her house to a newcomer. For a moment, we watch as she struggles with the vision before her, which for a second she almost sees as the embodiment of her dead child, who has temporarily been erased from her memory. When she realizes it is only her daughter’s new boyfriend (Alex Levy in a strong, sincere, likable performance of what too many productions treat as basically a throwaway part), there is a momentary mental readjustment that Vasquez allows to cross her face before inviting him in. Another lovely moment is “I Miss the Mountains,” in which Diana pines for the highs and lows of her life that drugs have taken away. Cromer beautifully allows her to perform it sitting on the stairs, giving Vasquez all the room she needs to take us where the song is going.

No less nuanced is David Schlumpf’s performance as put-upon, long-suffering husband Dan. I’ve seen several different Dans before, but his is easily the most dynamic. The up close and personal configuration of the theatre helps here as elsewhere, but Schlump is masterful whether playing the wrenching moments when Dan is confronted by his wife’s ongoing problem or the hopeful ones when he believes she just might overcome it. His “It’s Gonna Be Good” is terrifically enthusiastic as Dan tries to convince himself that things can work out for the better, and the anguish and intensity of his “I Am the One” illustrate the extreme frustration of Dan’s existence.

Joining him in that number is Liam Oh as Gabe, the long-dead son. Oh has a strong singing voice that really comes to life (pardon the pun) in “I’m Alive,” his signature number, and the throughline regarding his desire for a relationship with his father comes across more clearly than I’ve ever seen it before. Cromer is also unafraid to allow him to sing, ghostlike, from places we don’t expect, occasionally not even showing him until the song is well begun, and Oh sells those moments beautifully with voice alone.

As Natalie Goodman, the lone living progeny of the unhappy couple, Kyrie Courter establishes her character’s vulnerability early on and then develops it with the aid of several strong numbers including “Everything Else,” about the pain she feels trying to hold it together in her household. In “Superboy and the Invisible Girl,” the combination of her performance and Cromer’s staging gives the song even more power than it usually has. She is another very likable performer, as are they all, and lends the part a great deal of pathos as she goes through all sorts of changes before finally coming to grips with the impossibility of her mother’s illness. Cromer makes great use of her and Vasquez in the second act opener, “Wish I Were Here,” which lighting designer Keith Parham lights with only the use of flashlights, making it extremely eerie and unstabilizing even for a song about electroconvulsive therapy.

Cromer also uses Gabriel Ruiz well as both of the doctors we meet, helping the actor to provide some of the show’s stingy allotment of laughs (along with some fine moments from Levy). Ruiz is capable of dry humor as the pill-pushing Dr. Fine as well as broad comedy as the “rock star” Dr. Madden, and he is also a strong calming presence for Diana’s therapy sessions.

Next to Normal asks us to examine one of the most common, yet culturally stigmatized, problems families can come up against: mental illness. Diana’s is extreme, but any such problem can threaten to untie the threads that bind a family together. What remains for the Goodmans to hope for is not a normal life but “something next to normal,” and this powerful musical demands that we redefine what “normal” even is. Its view of life is dark at times, as befits its themes, but in the end all of the characters agree that they “need some light” as they sing a final, more hopeful number that shows that they have passed the point of trying to hide from Diana’s illness and maybe, somehow, they can forge a new life.

Next to Normal is now playing at the Writers Theatre, 325 Tudor Ct, Glencoe through June 16. Check the website for specific dates, times, and tickets. Find more information about current plays in our front page recs and at theatreinchicago.com.