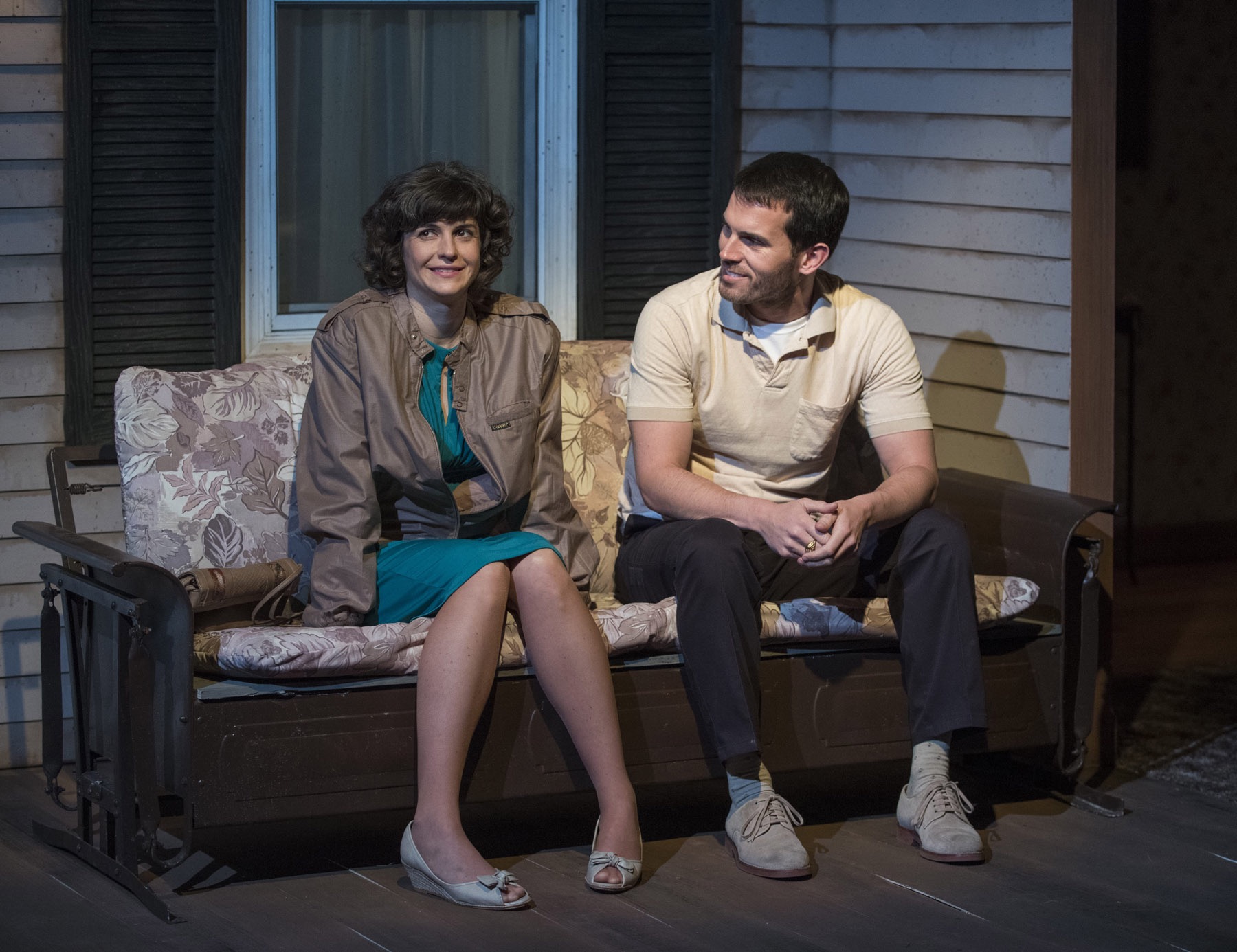 Sometimes life’s problems are monumental, matters of great importance and consequence. Other times, they are small and personal. The thing is though that even the smallest problems can seem to be of great consequence to those who are living through them. It is this type of concern that faces us in Raven Theatre’s Nice Girl, the Chicago premiere of a play about a woman who is stuck in a life that is not the one she wanted to be living when she set out. It is a funny, poignant slice of life, beautifully acted and directed, that asks a simple question: is life really life if you never say “yes” to living?

Under Lauren Rouse’s brisk direction, Melissa Ross’s play comes to life on Raven’s wide stage in a set (designed by Lauren Nigri) that meticulously captures the essence of 1984 middle class living. It is here we meet Jo (a very sincere Lucy Carapetyan), a 37-year-old self-proclaimed “spinster” who feels lost in a dead-end job as a secretary in an accounting firm despite having the intelligence to have been accepted into Radcliffe College earlier in her life. Her college career was cut short in the first year by her father’s death, and she simply never recovered any momentum. As she approaches forty, she is still living with her mother Francine (a marvelous Lynne Baker), who fancies herself ill with every disease on earth and has been a virtual shut-in for years. This is not her dream of where her life was heading when she headed off to college to study art.

The opening scene between the two, both with thick Boston accents, sets up their relationship. Jo repeatedly threatens to leave the house forever, and she has done so before, but even with Francine’s comical imperiousness, it is clear that the threat is empty. It’s also clear that both of them have issues with life as they are living it. Like any good Jewish mother, Francine wants her daughter to be happy, to find a nice man, to settle down. However, she also has a terrible fear of being left alone (hence the fake illnesses). These two incompatible desires help shape her character for much of the play. Jo’s nature has always been to be the “nice girl,” the accommodating girl, the one who makes no waves and is always ready to help, but this is at odds with her increasing sense of uneasiness in the life she is living. 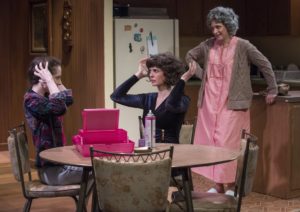 Enter Sherry (played broadly by Stella Martin), a 35-year-old party girl from Jo’s office with her own unfortunate story: she is in love with a married man. (Cue every cliché reaction to that situation.) As these two bond as friends, though, they have remarkably reciprocal effects on each other. Jo’s grounded nature, which Sherry says she admires, manages to bring out her friend’s more independent nature. And that nature, envied by Jo, allows the main character to seek out experimental “yes” opportunities in her own life.

One of these involves a potential relationship with a former high school friend she meets in the butcher shop he now owns. Donny (Benjamin Sprunger, playing all emotion tight to the vest) may not exactly be set in life in his rented room, but he represents an opportunity to open a new door for Jo. And he could hardly be more of a contrast with her: Donny wears a nearly permanent flirtatious smile, exuding a confidence he may or may not deserve, and his recent heartbreak over the breakup of his long-term marriage doesn’t stop him from moving on. Jo, on the other hand, is in entirely new territory. Spurred on by her new friendship with Sherry, she is taking a chance, but back at home her life is still so full of turmoil in the typically mother-daughter way that she hardly has a moment to enjoy it. Where Donny’s external emotions always seem within fifteen degrees of center, Jo’s are all over the map and she wears them on her sleeve. 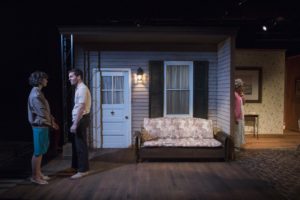 The play’s core centers on a simple question that Donny asks Jo: “You ever think maybe you were supposed to be somebody else, and…you got sidetracked?” Jo’s response (“all the time”) echoes what a lot of people might say; the “road not taken” is ubiquitous in our emotional culture and we all at times wonder what might have been. But for a woman like Jo, who has come of age trying to be “nice,” meeting her obligations to her mother, always putting others’ needs ahead of her own, the understanding that she has built a kind of reflexive wall against “yes” in her life, that her default is to remain static, leads to a kind of epiphany: though the world sees her as a “nice girl,” it has been a very long time indeed since she’s been a “girl” at all.

All four actors here are outstanding. Carapetyan emodies Jo’s confusion about self and her life brilliantly throughout the show, shining as the daughter in a typically discordant relationship with her mother, the out of place single at a bar, the woman who is never quite sure she even deserves a real friend or lover but craves them anyway. Baker’s take on Francine starts out a bit one note, but as the play moves on we realize that what we saw at the start was just the surface, that there is real depth in this seemingly self-absorbed woman. A brief moment with a distraught Sherry shows us the kind of mother Francine might have been, if she had not been “side-tracked” by life. Sprunger is all charm and sweetness as Donny, a character who uses that aspect of himself to fret over his marriage, to hit on a woman he likes, or to disarm someone who is angry with him. What saves the performance from being too surface level is Sprunger’s natural likability and his innate sincerity: it’s so impossible not to like Donny that it’s easy to see why Jo is falling for him. 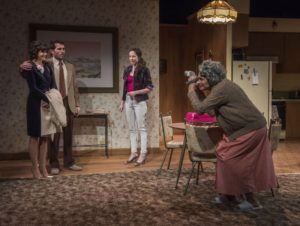 As to Martin, she’s a revelation. In a part that starts out as if it is heading into caricature-land, she brings powerful emotional turmoil to coincide with the broad humor Sherry provides. One scene in which she experiences a major disappointment is particularly noteworthy both for the emotions expressed and the ones clearly being held back: an excellent bit of acting. I’d love to see a play centered on this character: she has far more going on than the vast majority of “best friend” characters you will run into, and Martin simply owns her.

With that wide Raven stage, it’s easy to let a play get unfocused, but director Shouse is careful to keep things balanced, bringing out these stellar performances in her actors and never allowing a single moment to drag out. I’ve never felt that a two hour play passed so quickly. And a lovely “what will happen next?” ending  (aided by the strong lighting of Becca Jeffords) leaves the audience walking out of the theatre talking about the future of the characters, pondering whether a “yes” will really be a “yes” and recognizing all of the times in our own lives when it was not.

In a modern world where (as Sherry notes) women can be whatever they want, Jo’s predicament is more poignant. Life rarely affords us the easy choices, and she will likely be hurt no matter what she decides. But the very fact that she understands that there are decisions to be made creates the possibility to overcome the inertia of her previous choices. And whether such change is likely or not, the fact that there are options she can see might be enough to help her to become “unstuck” and, finally, move on. Nice Girl may not be an earth-shattering play, but it shows life as we live it, and it does it well.

Nice Girl is playing at the Raven Theatre, 6157 N. Clark in Chicago, until March 11. Tickets can be purchased at the theatre’s website.