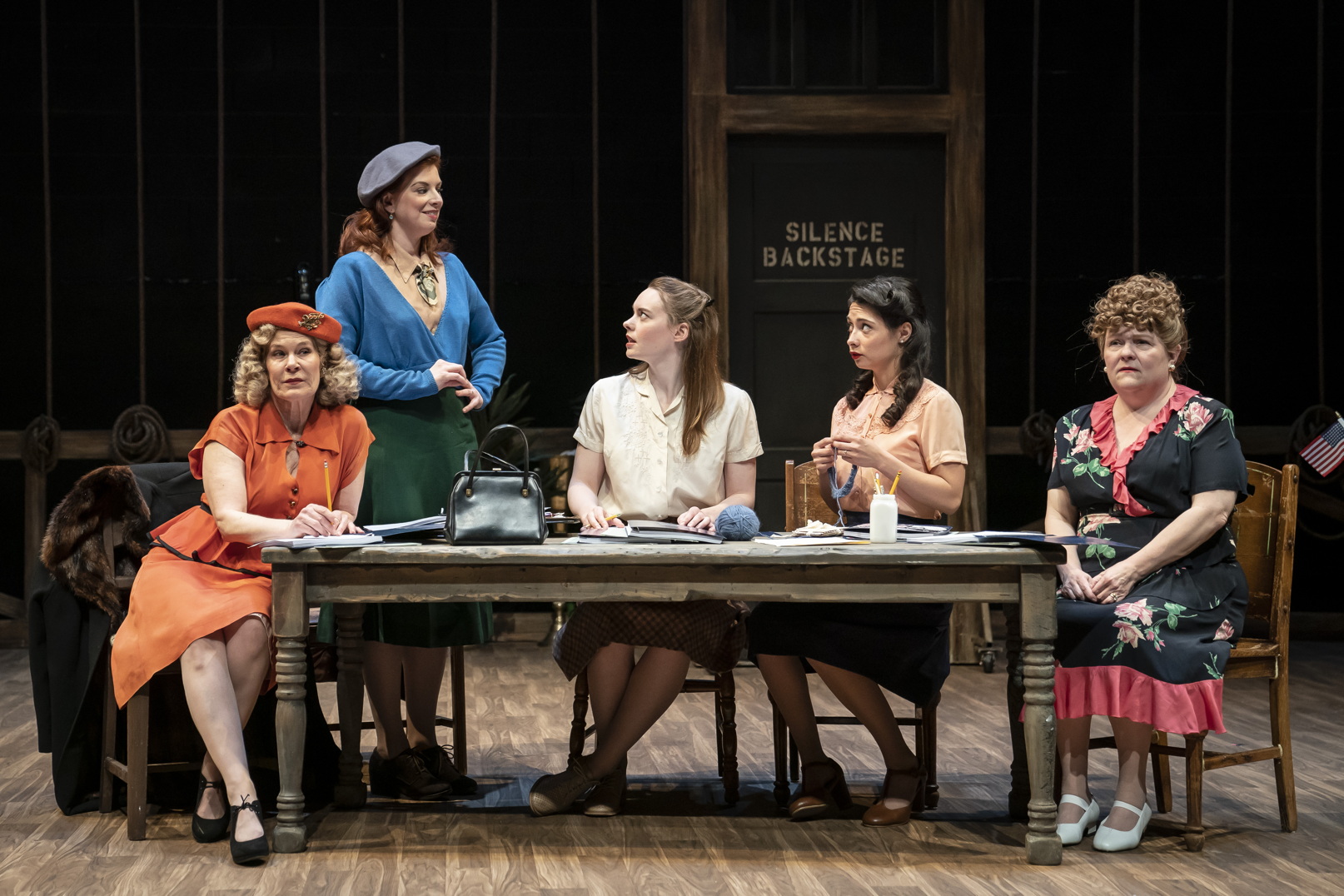 I generally am a big fan of plays that celebrate and/or deconstruct theatre itself, so I looked forward to seeing Northlight Theatre’s Into the Breeches, Park Ridge native George Brant’s comical exploration of a group of women trying to keep a local theatre alive while the men are off fighting World War Two. Featuring the incomparable Hollis Resnik as the company’s aging female lead with a solid ensemble around her and directed by Jessica Thebus, whose The Book of Will was arguably the theatre’s best production of 2018, this play had everything that I needed to watch it and love it.

In the end, I liked the play but could not fall in love with it. Something about Brant’s episodic structure, which requires the actors to stop frequently to change the scene, kept me at a distance even though Thebus was apparently quite cognizant of the problem, creating little character moments while changes were happening. This distance, though, did not prevent me from enjoying some wonderful performances and appreciating the many positive messages the play has to offer.

The premise of the play is that the Oberon Playhouse in Evanston is set to go dark in 1942 for the first time in its history because its director and all of its male ensemble members are off at war. Maggie (Darci Nalepa), the director’s wife and his usual assistant, decides to prevent that from happening by directing an all-female version of Shakespeare’s Henriad, the combined Henry IV and V plays—the play her husband had intended to open the year with and a wonderful homage to patriotism. Despite having no actual directorial experience and a tiny turnout for auditions, she manages to convince the recalcitrant president of the theatre’s board, Mr. Snow (Fred Zimmerman), to allow the play by casting his wife, the apparently hopelessly untalented Winifred (Penny Slusher) as Falstaff. During the rehearsal process, Maggie has to deal with inexperienced actors, infighting, and defection, as well as a group of women who are constantly worrying about their husbands, among other problems.

Resnik, playing Celeste, a veteran actress who, into middle age, insists on still performing Juliet for the company, has a wide open platform to enjoy herself, and she does. From the moments she first takes the stage, she demands attention not only from the audience but from the other characters as well. At the start, Celeste is mostly a thorn in Maggie’s side, taking over rehearsals and discounting the opinions of a director she clearly has no respect for. But Resnik plays the part with such enthusiasm that, though we can see her interfering with Maggie, we never dislike her for it.

Nalepa is a warm and comforting presence onstage, and it’s a joy to see her character manipulating Mr. Snow into every change that she needs but he doesn’t wish to allow. She is also afforded a couple of solo moments to explore Maggie’s sense of loss with her husband gone, which help to explain why she insists on starting rehearsals with “check-ins” during which the company can keep each other updated on letters they received (or didn’t) and other important matters. It’s this sense of caring that helps the small group to bond, and Nalepa plays it beautifully.

Zimmerman has a lot of fun as the gruff board president who is extremely reluctant to allow Maggie’s “forward-thinking” and progressive ideas on his stage but actually is an old softy, especially where his wife is concerned. And Slusher is simply wonderful as Winifred, who is utterly clueless about acting but extremely enthusiastic. The rest of the ensemble is also excellent: Annie Munch as a young mother who has previously undiscovered acting ability; Molly Hernandez as a gung-ho “give to help our boys” type who is so involved in the domestic war effort that she dislikes even being around anyone who doesn’t help out as much as they can; Penelope Walker as the costume designer who would love to trod the boards despite the Oberon’s never having allowed a person of color onstage in its 26-year existence; and Mitchell J. Fain as the gay stage manager who wouldn’t mind being given a chance to shine for once himself.

Thebus gets dynamite performances from all of them both in character and in the Shakespearean moments. Slusher is especially enjoyable once Winifred finds her Falstaff (and figures out how to act). But that leads to another issue I had with the script: after taking so much time to build these characters and show them learning this new craft, Brant doesn’t really give them moments to shine in their success. I would have gladly extended the play ten more minutes to see more than a brief glimpse of Winifred’s Falstaff, Resnik’s King Henry, Fain’s Mistress Quickly, and all of the rest, but the playwright doesn’t provide the opportunity. The only character who really gets to shine as their Shakespearean creation is Munch as Prince Hal (Henry V), who is brilliant in several rehearsal scenes as well as in giving the St. Crispin’s Day speech as a backstage motivator. I found myself wishing for much more.

I suppose that is, at least in one way, a good thing: there is the old adage, “Leave them wanting more,” after all. But I felt that what was missing—together with the choppy scenes—hurt the play, for all of its strong performances, direction, and excellent costume design by Samantha C. Jones. It’s a fun play and well-handled, but it comes with built-in limitations that might not bother a lot of people but did bother me. So, as I said, I liked it instead of loving it; nonetheless, if you can forgive it its trespasses, you’ll find Brant has actually written a rare theatrical piece that, as much as it is about theatre itself, also tackles equal opportunity, race relations, progress v. tradition, gender roles, and many other issues that still plague us today. It may be uneven, but it’s not often you find a single play that covers all of that.

Into the Breeches is now playing at the Northlight Theatre, 9501 Skokie Blvd, Skokie through June 16. Check the website for specific dates, times, and tickets. Find more information about current plays in our front page recs and at theatreinchicago.com.