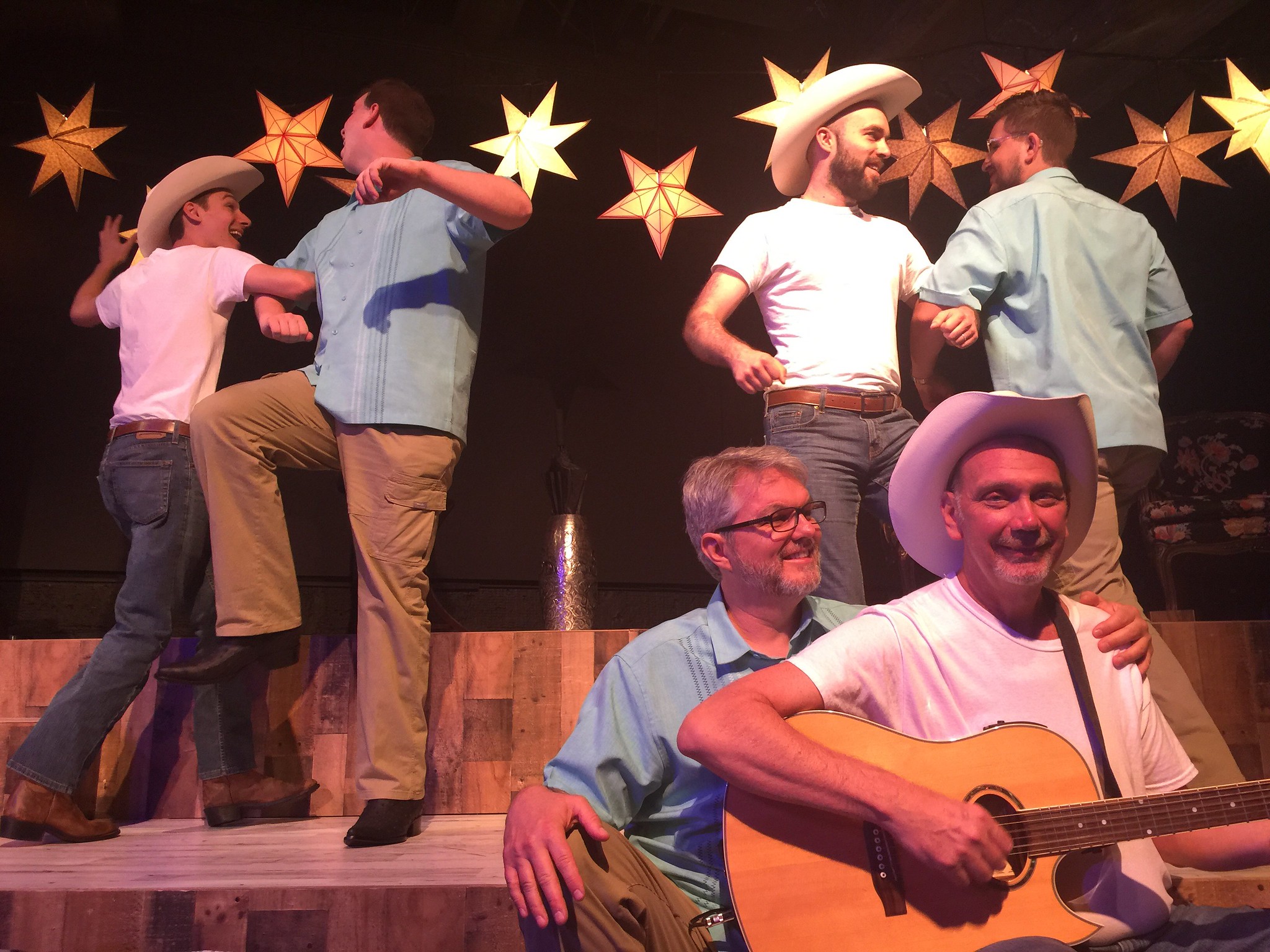 Now & Then is an ambitious little musical about the lives of a gay couple across forty years of time. With a book by Ronnie Larsen based loosely on the songs and life of composer Dennis Manning, the show features three versions of its lead couple as they meet, settle into their lives, and face the travails of aging. It’s an inherently interesting concept with likable performers and some fine folk and country-inspired music, and there are parts of it that I like a lot. In its current form, though (this is only its second-ever engagement), it feels very much like what it is: a potentially strong work-in-progress.

The two-hour play, directed by Larsen, seems about 20-30 minutes too long, with most of the excess coming in the first act, in which we meet the couple, Daniel and Greg, in their 20s, 30s, and 60s. Will Fulginiti and Benjamin Walton portray the younger version of the couple, whom we meet at a college open-mic night that aspiring comedian Greg is hosting (“Greg’s Fabulously Fabulous Open-Mic Night Hosted By Me, Greg”). The charmingly goofy MC, hearing Daniel sing, falls for him immediately and talks him into coming back to his dorm room to play more of his compositions. It’s a case of opposites attracting, as the laconic Daniel (who knows that he expresses himself better in song than in words) finds himself drawn in by Greg’s faux-confident rapid-fire banter. Fresh out of a seminary and confused about his sexuality, Daniel discovers the joys of love (and sex) with Greg, and their long relationship begins. Both Fulginiti and Walton are engaging actors, and it’s easy to like them both individually and as a couple. They have the vitality of youth and its unquenchable optimism for the future, which they imagine will contain fame and fortune for both of them (along with four houses).

Nearly two decades later, though, none of that has happened. Carl Herzog and Alex Smith, playing the couple in their late 30s, show us that the path has been rough. Greg, long past his stand-up dreams, works in a bank to pay the bills. Daniel, while still holding on to visions of Nashville fame, takes a job selling mattresses and retreats more and more into the bottle. As they fight with each other more and more, it seems that their promising relationship may be doomed. Or, anyway, it would seem that way were it not for the fact that we have also been introduced to the 60-something version of the couple, played by Manning himself (who originated this older version of Daniel in the world premiere) and Skip Sams, playing a Greg who is two years into cancer remission. Here, writer Larsen does director Larsen no favors: since we know they will stay together no matter what they are going through in their 30s, the stakes for the middle couple, who are really the focus of the play, are pretty much wiped out.

Act Two is considerably stronger than Act One for several reasons. First and foremost, writer Larsen allows his characters to have real conversations. Other than a few too-brief interludes, Act One is mostly wall to wall songs, a choice that prevents us from getting to know them in more than superficial ways. This structure also has the unfortunate side effect of running those songs together. Though they are mostly very good compositions individually, Act One (which includes seven songs and three unnecessary reprises), gives us no time to digest one of them before someone (usually Manning) begins strumming chords to lead us to another. And so many of the Act One songs begin with that strumming that they all start sounding the same, no matter how impressive they might be individually. I found it a bit overwhelming. Act Two contains more songs with sweet finger-picking, a welcome variation, and more of them directly tell the story. The content of the act also allows director Larsen to vary what we are witnessing onstage more. In addition to more spoken dialogue (Walton gets one super speech about his worst childhood Christmas), there are very strong scenes involving Herzog and Smith (a therapy scene, for example, works very well, though Larsen didn’t need to use Sams—Greg 3—to help us to see the therapist) and Sams and Manning, who, though not old by any means, are close enough to feel the end approaching. Act Two also contains significant imagined overlap among the three couples, who get to reach through time and “speak” to each other. These scenes, making direct use of the play’s main conceit, are among its best.

Now & Then has not fully found itself yet, but it is a sweet, tender musical that has the ability to grow into a pretty wonderful little show if Larsen and Manning continue to work with it. Some of the extremely heartfelt songs would be showcased better if there were fewer of them and far fewer reprises. (There are six reprises out of thirteen separate songs, a very high percentage.) Act One could easily be trimmed and combined with Act Two into a smooth 90-minute show that would allow the audience to enter these lives and enjoy them in all of their humor, love, and pain without things starting to feel repetitive. An even easier fix involves the lighting, an important element which on opening night seemed at times to be pretty random. One thing that doesn’t need adjustment is Melquisdel Dominguez’s three-level set, which (though a bit massive for this space) is impressive and works very well, giving director Larsen good areas to play on. There is even enough room for an endearingly sloppy line dance, and there is nothing at all wrong with that.

Now & Then is now playing at The Broadway Theatre, 4139 N Broadway, Chicago through Aug 11. Check the website for specific dates, times, and tickets. Find more information about current plays in our front page recs and at theatreinchicago.com.