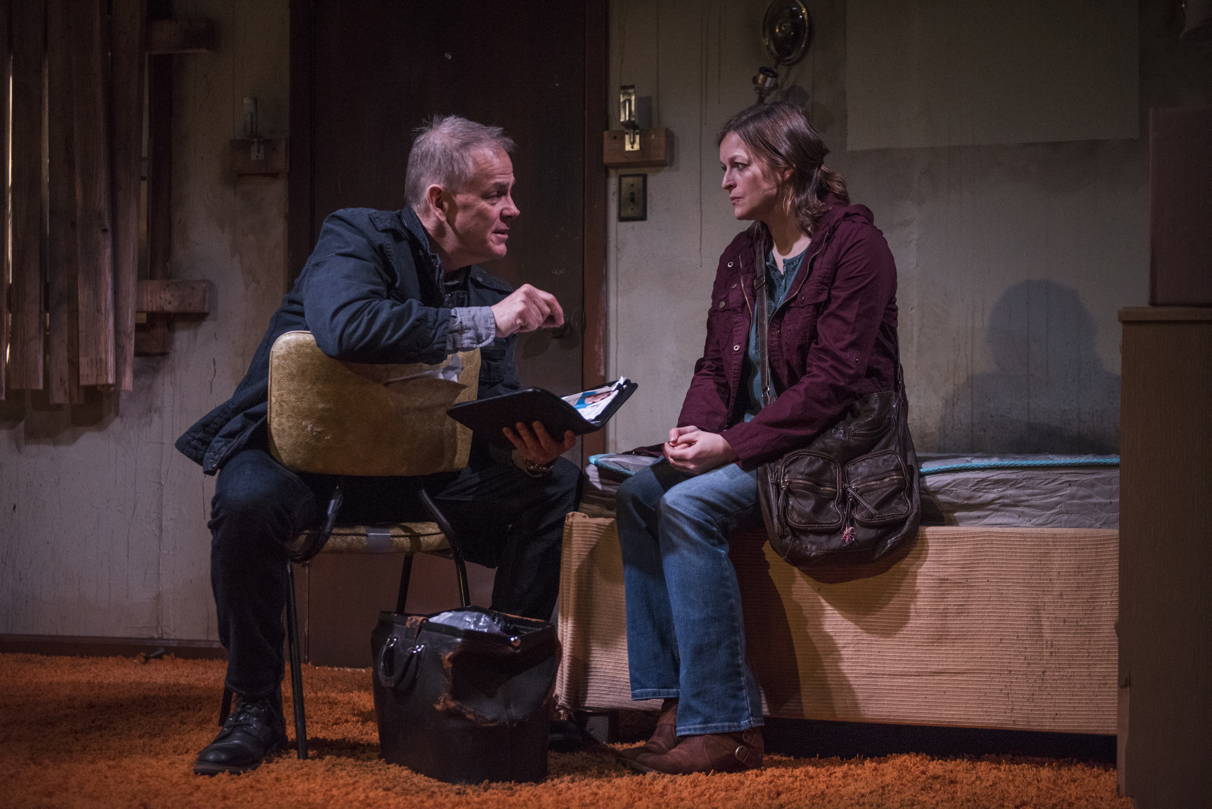 I stare at a photo of my daughter when she was a teenager. She could be headstrong, but for the most part we maintained a solid relationship all the way through those troublesome years. Other parents are not as lucky. Some children tune out; some act out; some threaten to run away. Some actually do. It must be the worst nightmare a parent can have short of a child’s death: a child is missing and you don’t know where she is or even if she is all right. American Blues Theatre’s Chicago premiere of Steven Dietz’s On Clover Road deals with one extreme version of that nightmare: what if the child ran off and ended up in a cult? How could you rescue her? How would you even be able to try?

Katherine (Kate) Hunter, played by Gwendolyn Whiteside, thinks she knows how to accomplish this. She hires a mysterious man (Philip Earl Johnson) who says that he knows how to get girls out of the cult run by “The Prophet,” and they meet together in a shabby motel room near The Farm, the cult’s compound. Kate will do anything, pay anything, to get her daughter back. But when the man shows up with her daughter in tow, ready to begin the agonizing process of attempting to deprogram her, Kate suddenly has doubts: is this 18-year-old young woman really the 14-year-old girl who left home so long ago? How can she know for sure?

Dietz has a lot of surprises in store in this intense, taut drama, and it’s best that I not spoil anything by talking about them. Suffice it to say that, unlike the wooden bars the man uses to block any exit from the room, there are no straight lines in this play. Kate finds herself slipping further and further into her nightmare the closer it seems to be to ending. Whiteside is very strong as a woman who had been, by her own admission, not much of a mother, who had made many mistakes, who drank too much and yelled too much, but who sincerely wants nothing more right now than to get her daughter back safely. The man tells her from the start that he is a caustic, abrasive man and she will likely end up hating him before they are through; he isn’t lying. Johnson is rock solid in creating a character that no one could love, but a man with nightmares of his own. The whole ensemble, which also includes Jon Hudson Odom and Grace Smith, is just as strong. Together they build the tension until you know it has to break, and when it does something new replaces it. Dietz has crafted out of a fairly simple plot a potent thriller with enough twists and turns to satisfy anyone.

Halena Kays directs the show with a powerful edge: we, after all, are seeing this through Kate’s eyes, and she is out of her element from before the play opens. All she wants is to get her daughter back, and Kays keeps that single concept front and center, getting from each of these actors performances with a sense of a personal stake. Lizzie Bracken’s set is the ugliest, most decrepit motel room you can even imagine, whose power to jolt the viewer stems from some clever lighting (Alexander Ridgers) and transition music (Rick Sims). This room is as broken down and dead as the relationship between Kate and her daughter Jessie is at the start of the play: like them, it is a shell of whatever it might have once been, and that probably was never all that much.

This is a play that will keep you on the edge of your seat no matter who you are. If you have any children, though, and especially if you’ve managed to get to the teen years, you’ll be tremendously affected by Kate’s plight. I stare at that picture of my own daughter, and I try to imagine the living death of losing her by her own choice, and it’s terrifying. On Clover Road is one hell of a thrill ride, taking you places you never really want to go. But that’s the whole point of thrill rides, right? We use them to face fear in a safe manner. As FDR said, we have nothing to fear but fear itself; sometimes, though, that can be enough.

On Clover Road is an American Blues Theater production now playing at Stage 773, 1225 W. Belmont, Chicago, until Mar 16. Check the website for specific dates, times, and tickets. Find more information about current plays in our front page recs and at theatreinchicago.com.