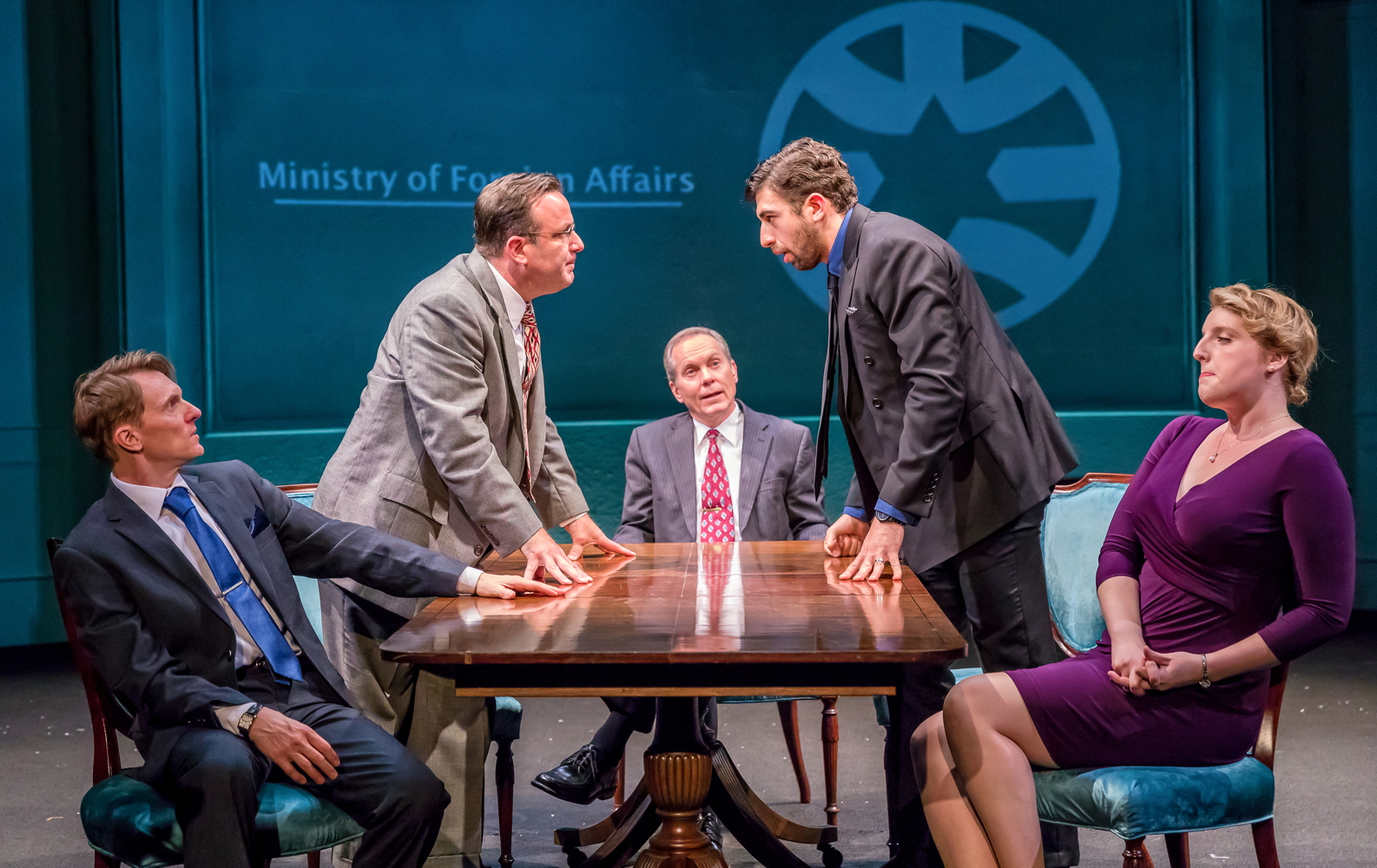 In our ever more divisive political atmosphere, at a time when the left and the right attack each other as if they were mortal enemies (and sometimes actually are), it is difficult even to imagine the possibility of these two extremes ever coming together and agreeing on anything. And perhaps it is highly unlikely. However, there is a lesson to derive from J.T. Rogers’ Tony Award-winning play Oslo: common ground is possible if we can focus on the simple fact that we are all human beings with the right to exist.

Oslo tells the behind-the-scenes story of the 1993 secret negotiations between the PLO and Israel, two long-time enemies who formally denied each other’s right to exist; yet over the course of nine contentious months they hammered out a framework for peace known as the Oslo Accords. That these agreements did not withstand the test of time (despite the principal players winning Nobel Peace Prizes in 1994) is a testament to just how difficult the process is when hatred and distrust run deep. But Rogers’ painstakingly researched and utterly arresting play serves as a reminder that possibilities always exist if we can push through our fears and hatred, as hard as they are to ignore.

Timeline Theatre’s powerful Chicago premiere production of this play, directed by Nick Bowling at the Broadway Playhouse (where they can accommodate far larger audiences than they could at their Wellington St. location), is part history lesson and part political thriller and is surprisingly funny. It begins with a relatively simple premise: that, in order for real progress and compromise to take place, negotiations need to be personal and direct. Both parties have to be able to put aside partisan bickering and recognize each other’s humanity. To accomplish this aim, the Norwegian authors of these discussions built into them time for both sides to meet informally, to talk and joke and see each other as people even while politically they remain enemies.

There is a visual illustration of this notion early in the play, as we watch video (part of Mike Tutaj’s brilliant projections) of two boys, each armed with automatic weapons, staring each other down in a battle on the Gaza Strip. Caught in this violence, Mona (one of the two progenitors of the peace negotiations, played with force and humor by Bri Sudia) recounts what she sees: “Two boys facing each other, one in uniform, one in jeans, weapons in hand, hate flowing between them. But their faces—and we both see this—their faces are exactly the same. The same fear. The same desperate desire to be anywhere but here. To not be doing this, to this other boy.” As her husband Terje (Scott Parkinson), who came up with the theoretical process the negotiations would use, says, it is time “to give those two boys a different narrative.”

Mona and Terje are the neutral parties who manage, despite not having the backing of any government (including their own, though Bernard Balbot and David Parkes play members of the Norwegian Defense Ministry) to bring Israel and the PLO to the negotiation table together, even while more formal peace talks sponsored by the Americans are going nowhere. (It was Israel’s policy and law that no government official could negotiate with the PLO, so the US was attempting the same failing strategy that had been tried for decades: trying to hold talks but not inviting one of the combatants.) In Norway, though, because these are unofficial, secret discussions that, according to both parties, don’t even exist, anything is possible. Mona (an official in Norway’s foreign ministry) and Terje (a sociologist with a keen interest in the living conditions of the Palestinians in Gaza) act as the outside forces that stimulate movement in the hitherto inert process. Sudia and Parkinson play them as dreamers who, to their own amazement, are in the process of realizing their dream and, the deeper they get entwined in their scheme, the more there is to lose if something goes awry.

Of course, it is inevitable that the parties will not see eye to eye on matters and that they will be reticent to trust each other, but that is where Torje’s plan to make them see each other as “friends” enters the picture. Over meals, stories, jokes, and drinks, the PLO and Israeli negotiators, who remain ruthless in the bargaining room, get to know each other, bonding over such things as their love for their children. (Both of the chief negotiators have daughters named Maya, for instance.) Slowly, they build enough trust to proceed to the thorniest issues.

Anish Jethmalani and Amro Salama play the Palestinian representatives Ahmed Qurie (called Abu Ala) and Hassan Asfour. Qurie, who has the direct ear of PLO leader Yasser Arafat, is a man who can be extremely forceful when negotiating but also can let his guard down when socializing. (For example, he particularly fawns over waffles prepared by Toril, one of several roles played by the chameleon-like Juliet Hart.) Hassan, a communist, is much more reluctant to let any vulnerability out where it might be seen and possibly used against him.

The Israeli delegation is led by the affable Yair Hirschfeld (Ron E. Rains), until it is taken over by Uri Savir (Jed Feder), a more seasoned negotiator. They report to Yossi Beilin (Stef Tovar) Deputy Defense Minister of Israel, who brings in no-nonsense lawyer Joel Singer (Tom Hickey) when it begins to appear that these talks might actually bear fruit. At that point, official security is brought in, portrayed by Bassam Abdelfattah and Victor Holstein.

Director Bowling juggles all of these characters with ease and keeps scenes alive and moving—important factors in what is a fairly long play at well over two and a half hours. It’s a very talky play, but Bowling prevents it from ever getting slow enough to become dull, giving Rogers’ sparkling dialogue the opportunity to do its work. He is aided by a fine creative team including Jeffrey D. Kmiec, Jesse Klug, André Pluess and others including the aforementioned Tutaj as, together, they bring this riveting work to life, including one of the most beautiful and realistic snow scenes I’ve ever encountered.

I am a Unitarian Universalist, and as such I strongly believe in the inherent worth and dignity of every human being, even though sometimes it is very difficult to remember that, especially when, as a transgender woman, I am dealing with those who would deny me the right to my own existence. I have witnessed the abhorrent power of hatred and how it can affect people, and I know that overlooking those strong emotions feels completely impossible. But Oslo proves that it can be done, as it was by two of the world’s most bitter enemies. Even though, ultimately, the accords did not last, they did change how these people viewed each other. As Torje suggests, it is a beginning, and, as he asks us, “How much further can we yet go?”

Oslo is a Timeline Theatre production now playing at the Broadway Playhouse, 175 E. Chestnut St, Chicago through Oct 20. Check the website for specific dates, times, and tickets. Find more information about current plays in our front page recs and attheatreinchicago.com.