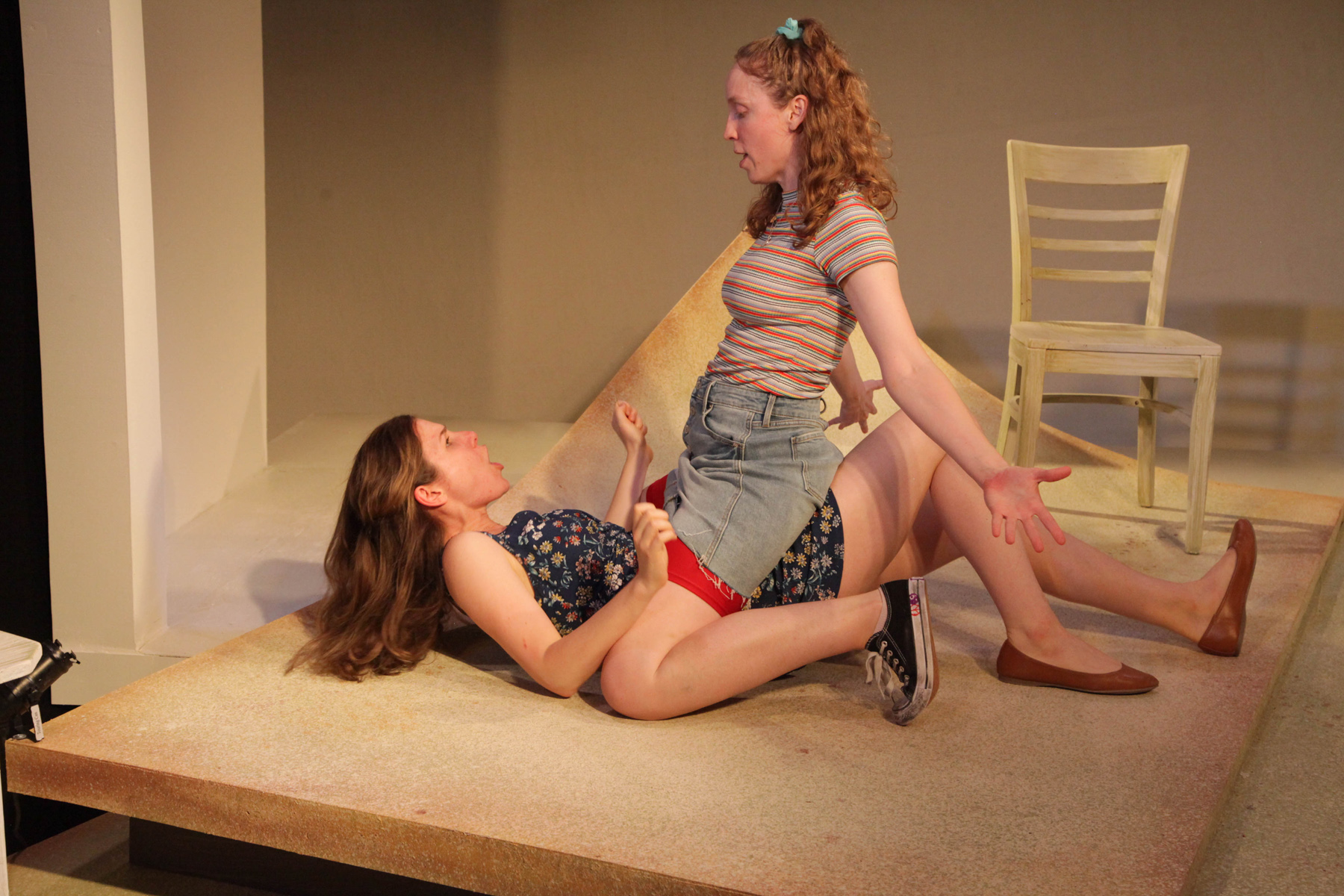 Elinor Cook’s impressive, poignant Out of Love belongs to an unfortunately rare genre: plays that, without pulling punches, highlight and explore the complexity of women’s relationships. Its two protagonists, daughters of friends, grow up together and remain connected all of their lives despite the twists and turns that female friendship often includes. Cook’s bittersweet drama doesn’t try to hide the blemishes of this relationship: anger and pain and even occasional nastiness share the spotlight with tenderness because the playwright’s goal here is to illustrate honestly the highs and lows that must be dealt with in order to maintain this kind of long term friendship, especially in a world that is not completely within your control.

The play, which is comprised of non-chronological episodes from their lives over three decades, focuses on Grace (Laura Berner Taylor) and Lorna (Sarah Gise), who grow up in a small town in Northern England sharing similar dreams of getting out. A third actor (Peter Gertas) plays all of the boys and men who are at all significant in their lives, and he is excellent at differentiating the nine different characters he has to play over the course of this brisk 75-minute show, which takes us from the girls’ young childhood until well into their thirties. But while many of these male characters certainly impact their lives, Out of Love focuses on the myriad confusing and often messy ways in which Grace and Lorna affect each other.

From the start, these two are both friends and rivals. The first thing we see is a very young Grace being rejected as a “bride” in a game of “wedding” and sadistically tormenting her friends Lorna and Charlie by creating her own version of the game, including highly awkward bits like using their tongues to kiss. It is the first indication of the jealousy Grace (who later calls herself a ‘six” on the ten-point attractiveness scale) feels toward Lorna, who is always the one whom the boys see when they are together. And thus it is throughout their lives: Grace learns to be satisfied by herself much of the time while Lorna jumps from one superficial relationship to the next, never caring enough to let any of them become essential to her life. (In fact, though we hear about them, most of them are never actually seen.) None of these interchangeable men affects her as Grace does.

If this were a different play, these men would probably determine the entire platform on which the relationship is built. But Cook is a more clever writer than that: sure, a lot of Grace’s and Lorna’s focus is on the boys and men in their lives, but it always comes back to their friendship and their dreams. Male characters most often are ephemeral, representing what society tells these women they need while each of them, in her own way, defies those expectations. And despite the occasional cruelties of youth, the two manage to maintain their connection, in part because they are the only consistent friend in each other’s lives.

Both girls desire to escape their hometown by going to college and finding jobs good enough to allow them to travel, but Grace’s plan is waylaid by the one boy she ever has a reasonably serious relationship with, as she finds herself, just on the cusp of leaving, pregnant. Thus, while Lorna goes off to school, finds a career, and visits exotic locales with her seemingly never-ending supply of boyfriends, Grace ends up stuck at home, raising a child and taking care of her sick father. There are years when they never see each other during which Grace’s internalized bitterness at her lot festers—just as it had when they were young—but it does not alter the fact that these two are bound for life.

Under the wise and thoughtful direction of Georgette Verdin, Gise and Taylor are both outstanding, playing these characters at various ages and slipping back and forth in time fluidly as Cook juxtaposes moments in their lives to show the ways in which they influence each other as they grow. Verdin links these moments with brief contemplative spaces that allow the scenes to linger in silence before they morph into something else, a very effective transitional device. Even the set design serves to allow the audience to see the fractured interdependence of these women, as Sotirios Livaditis places the action on a series of interconnected platforms set at odd angles jutting out from each other below a skewed false proscenium, which results at times in the actors seeming as unbalanced as their characters. In addition, Michelle E. Benda’s lighting and Erik Siegling’s sound design brilliantly integrate with each complicated moment Verdin and Cook create.

There is nothing simple about the spark that sometimes lights between girls and women. Each long-term friendship is a series of hills and valleys (and sometimes deep caves and dangerous seas) that must be navigated for it to survive. Out of Love unabashedly presents us with life in all of its glory and ugliness as these characters, united by an accident of birth, traverse the difficulties their personalities and their circumstances place in the way of love. Cook has written probably the best examination of the intricate entanglements of female friendship that I have ever seen. It’s difficult to imagine any woman who will not be moved by it.

Out of Love is an Interrobang Theatre Project production now playing at the Rivendell Theatre, 5779 N. Ridge, Chicago through Sep 14. Check the website for specific dates, times, and tickets. Find more information about current plays in our front page recs and at theatreinchicago.com.