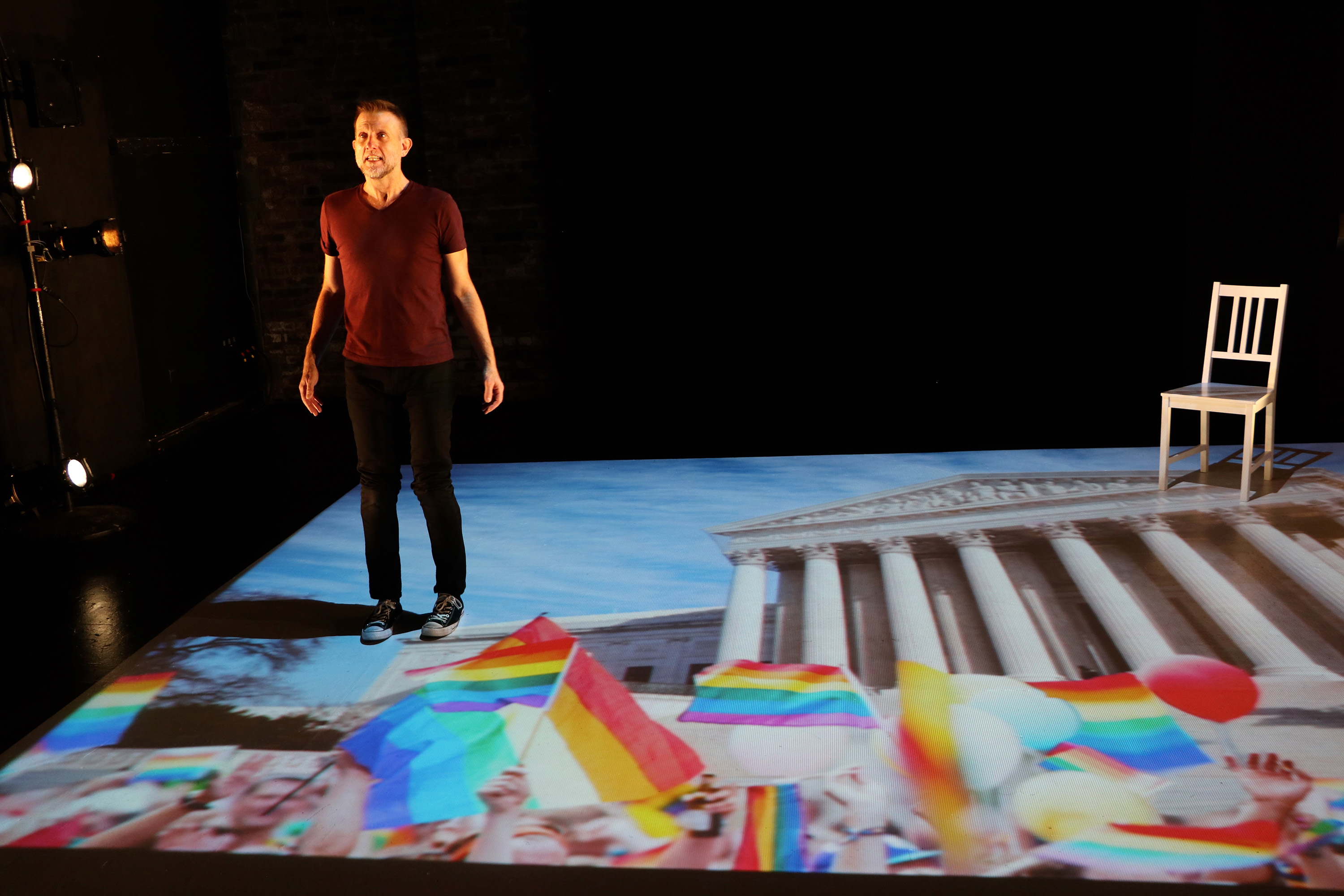 From the opening image of amber waves of grain projected onto its floor, Scott Bradley’s solo show Packing is pretty much a gay Americana play. During this 90-minute monologue, we watch through the eyes of a frequently broken and lost soul moving across the country and back again while the last fifty years of gay history unfold around him, affecting his life and the lives of millions of others. Under the sensitive direction of Victory Garden’s Chay Yew, this initial production of About Face Theatre’s 24th season is riveting, powerful, poignant, and at times utterly devastating.

Bradley, a writer, actor, and director, delivers an engaging, utterly raw performance as he takes us through the events that helped to shape his life, for better or for worse. He begins with his childhood in Iowa, where the gay, genderqueer boy faced derision from his alcoholic father as well as from the kids who surrounded him as he gingerly tested the waters of his homosexuality with other teens who were embarrassed by their orientations. His mother, having divorced, remarried a man who at first appeared sweet but quickly became abusive, and Scott was the target of a lot of his bile. In a fit of self-loathing, he sought therapy, only to end up sharing his secrets with a member of a fundamentalist church who warned him that hell was waiting for him if he did not change his sinful ways. This began what became a lifelong series of reinventions designed to help him to fit in better, none of which ever worked for very long.

Yew and Bradley, with the help of impressive projections from Stephen Mazurak and complex sound design by Eric Backus, tell this story as it weaves its way through the years of the AIDS crisis. Bradley moves from Iowa to New York to Seattle to Arizona to New York to Washington, DC, again to Chicago and back to Iowa in his never-ending search for a way to quiet the powerful, jeering voice in his head telling him he is worthless and to stop what he refers to as “glitches” from happening within his brain. At some point, he discovers that he can shut down both the voice and the glitches through alcohol and drugs, and these twin poisons end up taking over his life.

Interestingly, though the closeted gay, effeminate boy becomes an openly gay, effeminate actor living in mostly urban locations, the two most important things in his life are a pair of antique rifles: his grandmother’s squirrel gun, which she left to him when she moved into a home, and the consistent mental image of the musket his grandfather informed him was used in the Civil War by one of his ancestors, a symbol of the kind of frontier stock from whom he descended. These guns, each reflecting a lifestyle that could not be more opposite to the one he lives, might be the only pleasant memories he has of a childhood spent hiding in despair, though the voice in his head tells him that he has not earned the right to own them at all.

Bradley’s story is one of a person who has survived a lot, sometimes by the skin of his teeth. Throughout his performance, he bares his life with such honesty and emotion that, though he is painting a harrowing picture of a self-destructive man squandering chance after chance, we feel deeply for him. Somehow he gets through it all, right? He is here showing us his story, after all. But such is the powerful grip that story has on the audience that we hurt for him and worry about him anyway, especially as he narrates moments like a frightening assault by a group of erstwhile friends.

Packing is the kind of piece that will linger long after the audience leaves the theatre. Whether you are gay or straight, whether or not you have your own memories of the events Bradley describes, you will leave with this story under your skin. The man sitting next to me, who had seen the original workshop of the play, drove all the way from southeast Iowa just to see this production, and he was heading home when it was over. I asked if it was as good the second time, and he said, “Better.” Both the smile on his face and the trace of tears in his eyes loudly proclaimed that the trip was well worth the time and effort. Since you will certainly have a less exhausting journey, I’m sure it will be worth yours as well.

Packing is an About Face Theatre production now playing at Theater Wit, 1229 W. Belmont, Chicago, IL, until Dec 7. The show runs 90 minutes; there is no intermission. Check the website for specific dates, times, and tickets. Find more information about current plays in our front page recs and attheatreinchicago.com.