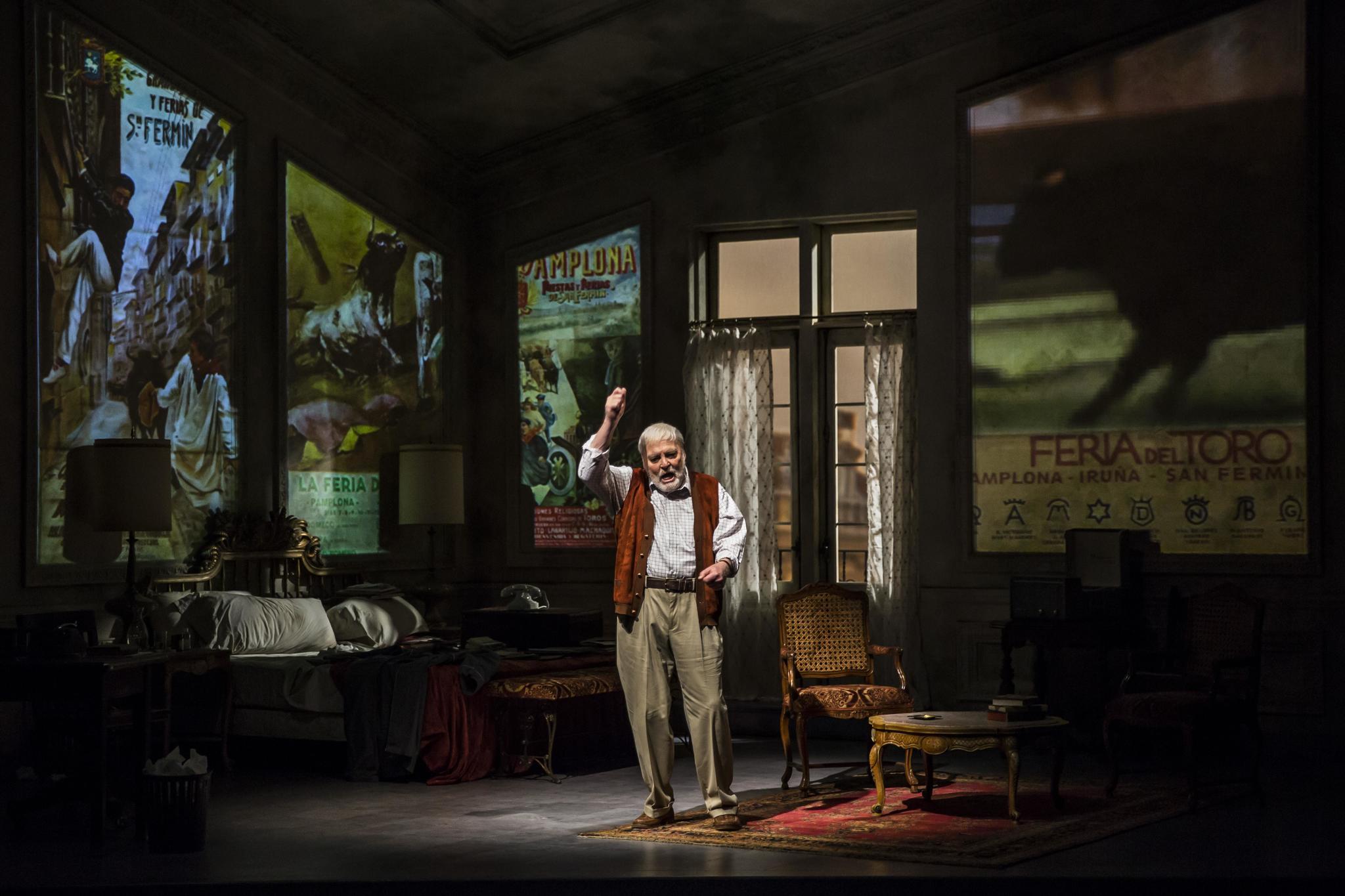 Stacy Keach won an Emmy nomination and a Golden Globe award for his portrayal of Ernest Hemingway in a 1988 eponymous mini-series, and he’s back for a second go-round in the Goodman Theatre’s Pamplona. This time, in a one-man show written by Jim McGrath, Keach conjures a Hemingway who, in what will be the last year of his life, is easily sidetracked, quick to anger, and unable to focus enough to finish (or even much more than start) his current project, a series for Life Magazine about bullfighting. He is a tired Hemingway, broken by the events of his later life including two plane crashes, serious health issues, and the apparent loss of his relationship with his fourth wife, Mary. Under frequent collaborator Robert Falls’ direction, though, Keach portrays him with the kind of inner vigor that Hemingway made himself known for.

The play takes place in a Spanish hotel room five years after Hemingway won his Nobel Prize and shortly after his 60th birthday, an occasion when Mary had arranged a tremendous party for him—a party at which he mostly ignored her in favor of a younger woman. In the ninety-minute production, Keach’s Hemingway reveals both the triumphs of his life (he brags about both his physical exploits and his writing success) and its failures (his four marriages, his never-healed relationship with his mother, etc.). It focuses on a single moment in his life: his frustration in trying to find the right hook with which to write that magazine article. It’s a moment that allows Keach to explore the author’s entire life and those who had the most effect on him. The term “tour de force” is often thrown around a bit too casually, but here I think it truly applies: Keach simply embodies the writer. The audience around me reacted viscerally to both his humorous moments and the stark realities of the author’s life. It’s not necessary to know anything at all about the latter to understand the play, though familiarity with Hemingway and his times might add depth to the experience. (Some knowledge of F. Scott Fitzgerald, Gertrude Stein and others is helpful but the script is excellent at exploring these figures and their relationship to Hemingway.)

Falls places his character in a hotel room designed by Kevin Depinet, its realistic accoutrements at odds with the forced perspective effect of its walls and windows, a surreal touch that allows Adam Flemming surfaces on which to project images of Hemingway’s life and the people who made it interesting. The projections are truly a second character in the play, letting us see the various subjects Hemingway is speaking about and providing cityscapes for background with the help of some lovely lighting by Jesse Klug and with Michael Ross’s original music setting the tone. Like all one-man shows, this one is far greater than the single character. In fact, there is are legitimate second and third characters we never get to see: the hotel concierge with whom Hemingway has established a long-term relationship and an unknown man in the adjoining room who keeps complaining about the volume of the music. (Hemingway, in a fit of obvious paranoia, seems to believe at one point that the man could actually be J. Edgar Hoover, the infamous FBI director who did, in fact, have extensive files on the author based on his leftist leanings in regards to Cuba and Spain.) That these unseen characters seem so real is a tribute both to the writing and to Keach’s performance.

Pamplona was a part of Goodman’s 2017 lineup, but Keach suffered a mild heart attack on opening night and the show was postponed to this summer. Fortunately the actor is clearly in better health, as he proves during this dynamic and fascinating character study. No matter what your relationship to Ernest Hemingway’s writing might be, you’ll find Keach’s portrayal to be eye-opening. Though he covers no truly new ground in this play—the historical record is tremendously clear—Keach and McGrath make the blunt-spoken, ultra-macho Hemingway into someone who is a joy to spend an evening with.

Pamplona is a Goodman Theatre production now playing at the Goodman Theatre, 160 N. Dearborn, Chicago, until August 19. Performance times may vary; check the website at Goodman Theatre. Find more information about current plays on our Current Shows page and at theatreinchicago.com.