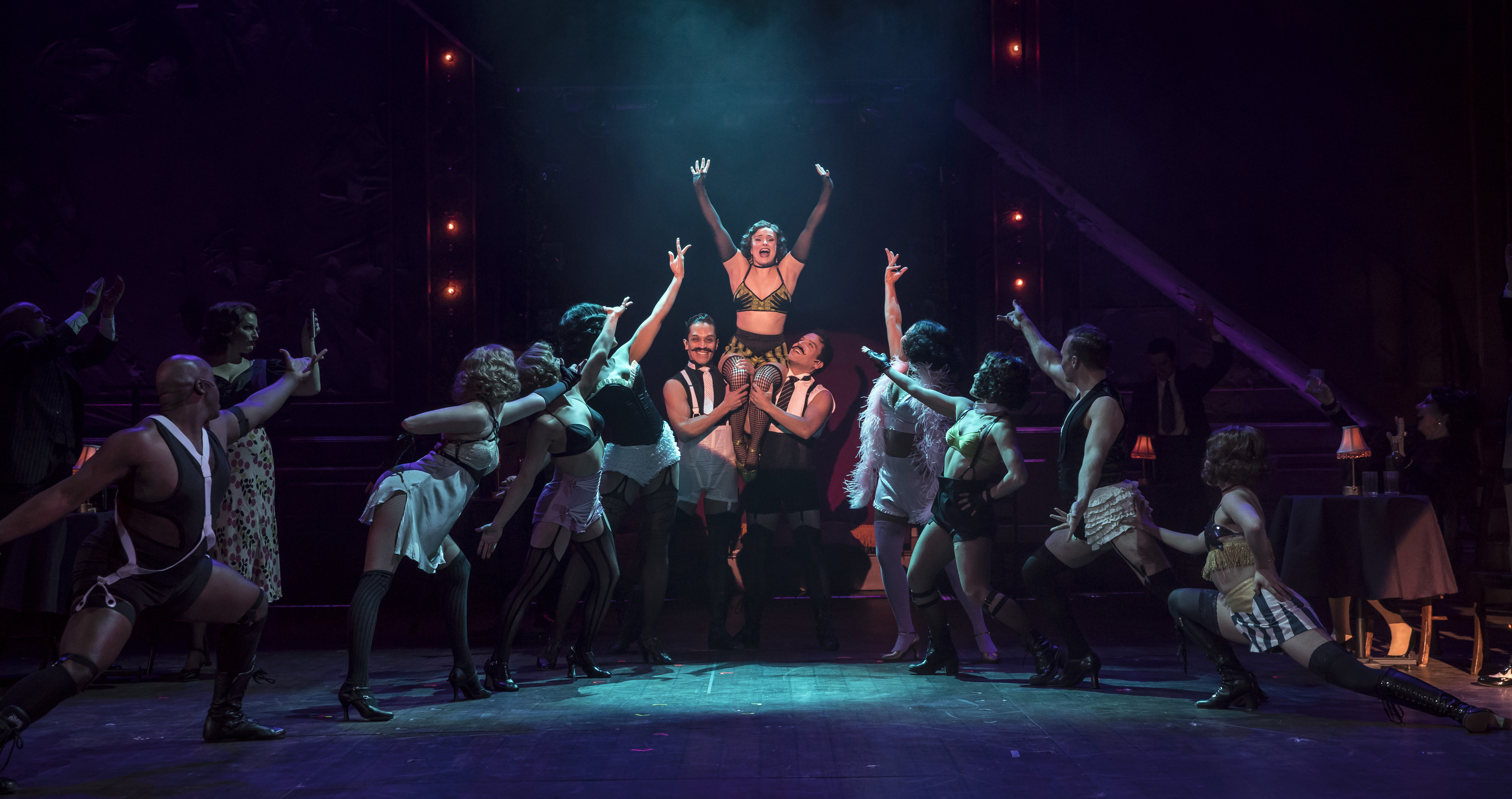 Cabaret is always a difficult show both to produce and to watch. The 1966 Kander and Ebb musical features several wonderfully comic numbers from “Don’t Tell Mama” to “If You Could See Her Through My Eyes,” but ultimately its message is one of foreboding and impending darkness. It is a difficult balancing act to handle well. The great news is that the new production at Aurora’s Paramount Theatre is able to hold onto the delicate tension between comedy and pathos brilliantly.

Set in 1931 Berlin, a decadent town on the verge of being overwhelmed by Nazis, Cabaret takes place mostly in two locations: a run-down boarding house owned by Fraulein Schneider (the always impressive Hollis Resnik) and the Kit Kat Klub, where the Master of Ceremonies (Joseph Anthony Byrd, direct from Kinky Boots on Broadway) entices patrons with decadent performances and scantily dressed girls (and boys). The headliner for the club, Sally Bowles (Kelly Felthous), is a kind of apolitical Liza Minelli (in fact, Minelli played her in the 1972 film), all excitement and enthusiasm for the party atmosphere of both the club and Berlin but no real-world awareness. Other key players include Brandon Springman’s Ernst Ludwig and Meghan Murphy’s Fraulein Kost.

Into this scene comes a young American would-be novelist, Clifford Bradshaw (Garrett Lutz). Clifford’s own naîvete is challenged by the debauchery of Germany at this time, but the rising fascism is impossible for him to ignore, especially when it hits close to home. Herr Schultz (Ron E. Rains), a Jewish beau of Fraulein Schneider, becomes a victim of the Nazi prejudice against his religion. Though he doesn’t believe it will last (“I know the German people. After all, what am I? A German.”) we know that his guilelessness will be his doom, and the swastika looms large everywhere. When Clifford begins to understand all of this, its effect on the club and his blooming relationship with Sally becomes the story of the play’s second act.

The acting in this show is uniformly wonderful. In addition to a tremendous ensemble, Director Katie Spelman manages to elicit powerful performances from just about all of his leads. Resnik, especially, as the droll and self-deprecating Schneider, imbues her character with just enough sadness to make her one of the chief sources of poignancy throughout the evening. Rains’ sweet, kindly Herr Schultz is so open and warm that you want to take him home. Murphy’s Kost is caustic and wonderful as the Nazi sympathizing hooker down the hall from Clifford, and the too-good-to-be-true Herr Ludwig is deftly handled by Springman. While Lutz’s Clifford fades into too many shades of beige, it’s hard to fault his performance too much: it is ultimately a thankless role to play, as Clifford is more or less the eyes from which we see the play. His importance is as the canary in the coal mine, the one who sees and understands what is happening.

The two biggest leads, though, are stellar. Byrd brings all of his tricks into his portrayal of the sleazy, mostly androgynous MC, telling us again and again that everything in the club is “beau-ti-ful” and seeking to sell sex as the era of excess ends. In most scenes, he is having a wonderful time dancing with the club’s ensemble, but he shows his own acting chops in the second act’s powerful “I Don’t Care Much,” a song that belies its own title: “I don’t care much/ Go or stay/ I don’t care very much/ Either way.” But as gifted as Byrd is, the show ultimately will hang on Sally Bowles, the willfully ignorant playgirl/headliner/love interest. Felthous delivers an impeccable performance, from the ebullience of her early songs to her gradually falling for Clifford to the mania and furor of her ultimate rendition of “Cabaret.” She is a Sally Bowles like you’ve never seen, one tinged with anger, fear and doubt alongside of her expressed optimism.

Director and choreographer Spelman does a marvelous job of juggling all of the disparate pieces. The bawdy dance numbers in the Kit Kat Klub are sensual, funny and alive with the wanton spirit of an era when nothing was out of bounds. The sweet, tender moments (“Pineapple,” a love song between Schultz and Schneider, for example, or “Maybe This Time,” Sally’s plaintive hope that she may somehow have lucked onto the right guy) are handled with sensitivity. (Yael Lubetzky’s lighting on the latter is one of the finest moments of the night.) Scott Davis’s set is perfect from the worn curtain at the start to the interior degeneracy of the club itself to the simple bed-and-doors sets for the boarding house. Adam Rosenthal’s sound work is outstanding, the costumes by Mieka van der Ploeg couldn’t be more right, and the sixteen-piece orchestra conducted by Tom Vendafreddo is absolutely perfect.

Cabaret is a long show—the performance runs nearly three hours including its intermission—but this production is not one to be missed. It’s a timely reminder of how easily everything can fall apart, and a sensational version of a complicated musical. It’s another in a long series of successes for the multi-award-winning Paramount and one that seems destined to add to their trophy cases.