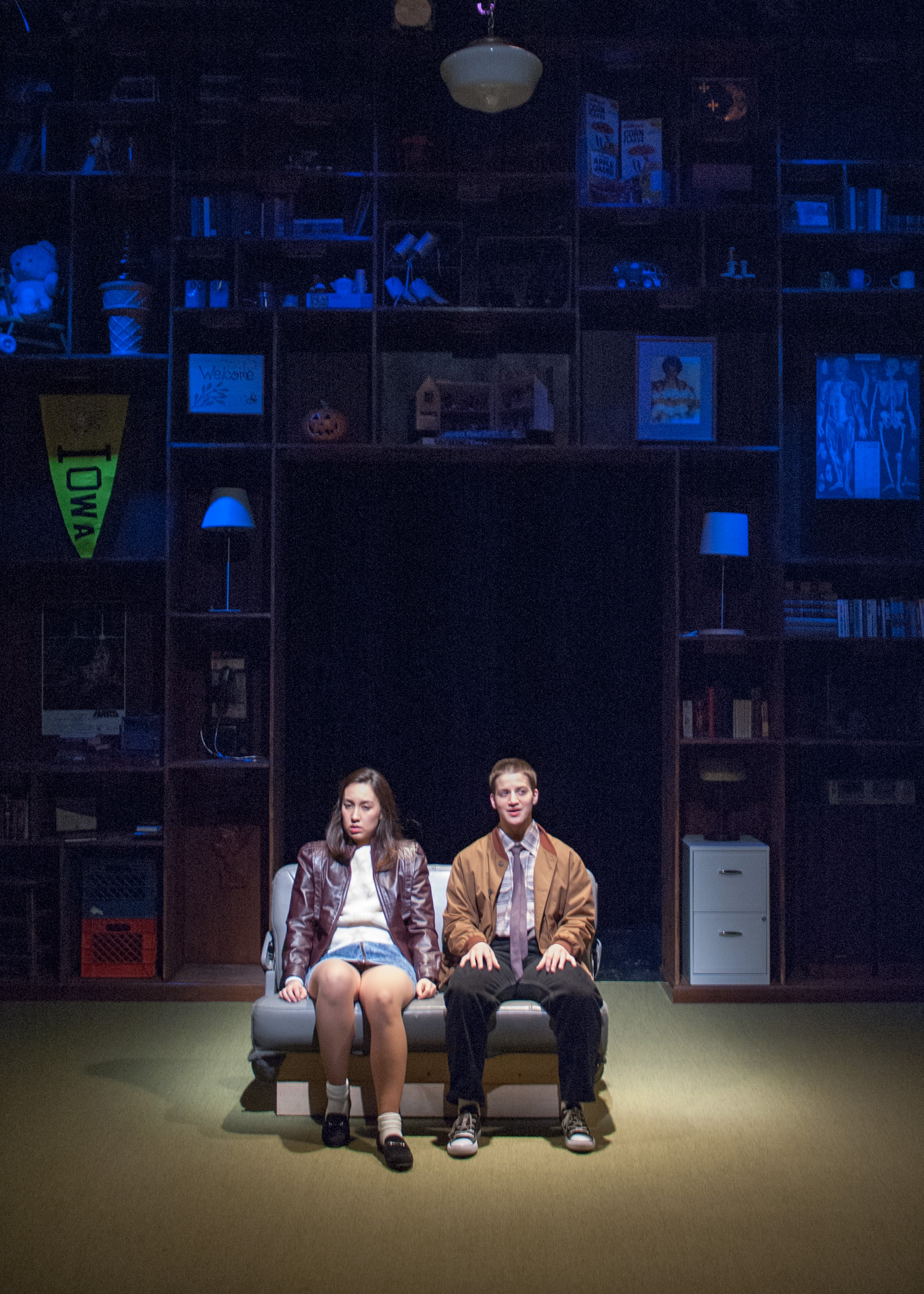 Step into the world of Timeline Theatre’s “Boy” and you walk through an exhibit about the innateness of gender into a theatre divided between two huge wall units packed to the gills with memorabilia of childhoods spent in the wrong one, courtesy of the more than a dozen artists involved with the play who are transgender. As segments of the wall units randomly light up, highlighting a dollhouse here, a toy truck there, the pre-show audience is invited to contemplate what gender means and why it is so important. For this is a play about that importance, and playwright Anna Ziegler wrote it as a fundamental statement about that importance.

It is also a play based on a true story about a boy, David Reimer, a cis boy who, through a terrible circumcision accident, lost his genitalia as a baby and was raised as a girl by his parents on the advice of a specialist, Dr. John Money of Johns Hopkins University, who believed that gender was “malleable” until the age of two or three. David never took to his “female” life and, at age fourteen, was finally told the truth, almost immediately reverting to being male. Sadly, the entire mess left such psychological scars that David ended up taking his own life years later. Dr. Money, on the other hand, spent the majority of his life being considered the most renowned expert on gender in the US, based largely on his published findings about the “success” of the Reimer case.

Ziegler’s play departs severely from the facts of that case to the point where she labels it fiction, but the nature of the story is the same. Money’s “expertise,” whether a sincere effort to help these people, as he said, or a cynical attempt to prove once and for all that his theory was true by applying it to a once-in-a-lifetime case involving a cis boy, destroyed a family. The Reimers, who saw him on one of his self-aggrandizing television appearances and immediately decided he might be their way out of a horrible situation, took his advice. They created rigid gender barriers between David and his twin brother Brian, treating the former to a (doctor-prescribed) stereotypical “female” upbringing (dolls, dresses, sewing, cooking, etc.) while allowing the latter to stretch his wings and explore his budding masculinity (helping dad with car maintenance, etc.). They saw Dr. Money frequently, and his aggressive treatments (which, unlike in the play, were very harsh and often sexual in nature) cowed young David into towing the line. Despite “her” consistent problems at school and lack of friends, Money convinced the Reimers that everything was going according to plan. His book on the case became a national best-seller, providing him the security to develop his gender clinic at Johns Hopkins and continue to foist his formerly controversial notions on the world.

It wasn’t until 1997, years after all of this took place, that a reporter tracked down David Reimer and informed him not only that his case was famous but that it was the basis for treatment of intersex people around the country and even the world. That is when the truth came out. Money was discredited when the country learned that not only had his treatment failed miserably, but that he’d actually known about it for years and said nothing. Within another decade, both Reimer boys would die at their own hands from problems stemming from their upbringing, from a decision made by desperate parents to save a child by placing him into the care of someone who may well have cared for him but saw him even more as a means of proving his own theory correct.

All of this, though, is background and widely known.

What I experienced upon entering that theatre, though, was something like a great chasm opening up, its endless maw waiting to swallow me. As possibly the only transgender theatre critic in the country—one of the few, anyway—I have always had a personal relationship with the Reimer case. Back in the 70s, when he was known as “John/Joan” in psychiatric circles and in public discourse, David Reimer and John Money helped shape my life.

I had known I was female since I was old enough to know the difference, but I had told no one, had said nothing to anyone. Instead, I spent my childhood quietly jealous of my sisters and unable to fit in with my brothers and the boys on the block and in my school. I remember Christmas gifts of Erector Sets and things, dutifully playing with them and building God-knows-what while wishing I could play with the Easy Bake Oven under the tree. Oh, I liked my Chemistry Set, though: randomly dumping chemicals into each other to see what might happen. I think I was reckless because I simply didn’t care if anything went wrong. I remember playing “Mystery Date” with my sisters once; it probably seemed like a lark to them, but it felt so inclusive to me. In my cubicles on that wall unit, surely I’d put these items. But, thanks partly to Money and the John/Joan case, I’d also probably put in a hockey goalie glove. After reading his theories and the “success” of the case (which made me jealous of a kid whose penis had been mangled), my young mind became so completely confused—how could gender be malleable when it felt so utterly a part of me?—that I decided I probably needed to learn to fit in with the boys somehow. That “somehow” was ice hockey. It helped me survive my teen years and then, when Renée Richards transitioned and I realized how absurdly expensive the whole proposition was, I found myself resolving to live life as a male even if it were wrong.

But I hated John Money for his theories. I hated him for his success with John/Joan, which lent them such credence. I hated his smugness that he proclaimed to understand what I was going through. And when, two decades later, I finally read the truth, I hated him even more.

It was 1997 and my world was changing. I was on the verge of transitioning because whatever it was inside of me that allowed me to remain in the world as a “male” had run out of time. I was risking my job, my family, my marriage—I lost the latter—but it was so necessary it could not be helped. And then to all of this came the David Reimer news.  I was immersed in my own struggles, but I was devastated for him and his family. As a parent myself, I felt so deeply for his mother, who had made the unselfish move in his infancy to do whatever it took to help him and had been rewarded by such pain. I felt for his father, who had lost a son’s childhood so unnecessarily. I felt for his brother, whose drug abuse had clearly been the result of the chaos of his family life. And of course I felt for David. I understood David as I had never understood a cis man before: here was someone who knew what it was like to be brought up wrong. Yet he was not transgender. He wasn’t even intersex. He was a cis boy who had had a dreadful accident. As I read of his anger and his pain, I felt my entire life flash by me, and I knew that the timing was powerful enough to create a kinship: his initial story had come out at a moment when I was dreaming of transitioning and it had been a catalyst to push me away from that dream. Now the sequel—the truth—came out as I was abandoning my own lies and transitioning anyway.

When David Reimer killed himself in 2004, I felt broken, as if I’d lost a friend. Yet of course I never knew him, hardly recognized him as more than a news story with particular meaning for me. Still, his death hurt—at first a sharp pain like a broken bone but later the dull, throbbing pain of some kind of deep bruise. I looked ahead to my own life and wondered how it would turn out.

When I walked into that theatre, I saw all of that memorabilia on the walls, reaching across the set and toward the high ceiling of the Timeline space. So much life there. So many memories. So many things that must have brought that same mixture of smiles and pain that the Chemistry Set now brings to me. That’s the trouble with life lived in the wrong gender: even the best memories become painful, and there aren’t enough of them to go around. You spend your adult life wishing you could remember a childhood that wasn’t the one you had. I wish I could have been one of the girls in the matching dresses in the family photos, but wishing does nothing. Perhaps this is one of the reasons why Anna Ziegler chose to end the play on such an uplifting note instead of delving into the story as it actually was: wishing does nothing. When Adam in the play tells his truth to Jenny, he does so matter-of-factly, in media res, as if she already knew and understood the main parts. It’s his life; he can’t wish it to change, so he has to accept it. And when Jenny does, at least for that brief moment, all is well.

I’ve had my share of “all is well” moments since transition. I live for them. I’ve also had a lot of difficult ones. But I admit it is nice to see a story in the transgender/intersex realm—even if David Reimer was actually neither—that has a happy ending. I wish his life might have as well. But that story would, alas, be a fairy tale.