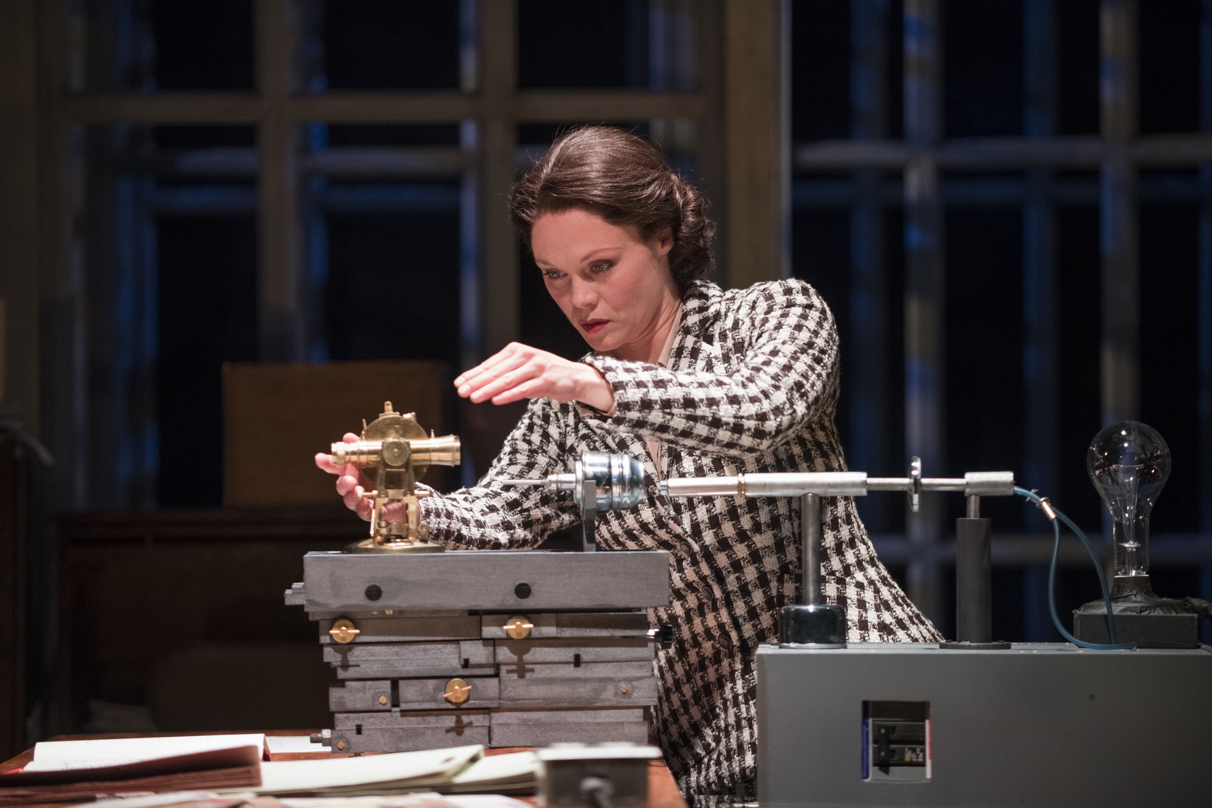 Photograph 51 by Anna Ziegler, now playing at the Court Theatre, has a difficult task: rendering complex scientific research as tragedy. The play concerns the pioneering work of Dr. Rosalind Franklin, whose King’s College x-ray photographs of DNA (particularly one labeled Photo 51) led to the discovery of that molecule’s double helix form. Ziegler presents her play as a blend of raw story-telling (done by Franklin’s colleagues and contemporaries) and dramatizations of the scientist at work, at odds with male colleagues, especially her King’s partner Maurice Wilkins and Cambridge researchers James Watson and Francis Crick, the three who were eventually awarded the Nobel Prize for their continuation of her work.

Wilkins, Watson and Crick also act as narrators, mostly rehashing the versions of Franklin’s contributions that they wrote about after her death. In addition, narrative is handled by Ray Gosling and Don Caspar, two men whom Franklin mentored during their Ph.D studies. Gosling, who assisted with her work in the King’s lab, and Caspar, who may have been close to the only man she ever loved, tell a far more sympathetic story than the others, who focus on her sometimes abrasive personality and her inability to work with others. All of these men, though, tell the story of a woman driven by her own brilliance and focus but unable or unwilling to envelop her studies in theory, a failure that assured she would not be the one to make the final discovery.

If all of this sounds complicated, it is, and director Vanessa Stalling does her best to make it not only clear but engaging. Working on a multilevel set designed by Arnel Sancianco consisting of dozens of open window-like spaces at least three layers deep flanked with two circular staircases (double helix: get it?), Stalling keeps the action flowing with as much variety as possible in staging, though she is ultimately confined to the laboratory that takes up the main level, representing the confinement of Franklin herself in her long, long days of research and experimentation. The set is enhanced by some outstanding projection effects by Paul Deziel that highlight both its shapes (Franklin says several times how fascinated she is by the shapes of things) and the scientific research itself. It’s a marvelous set design, and it allows for the other characters to examine Franklin’s work from a distance, as she held them to a distance in real life.

Chaon Cross plays Franklin as a caustic, driven person, taking cues from Watson’s book Double Helix, which depicts her in an unflattering light. Cross’s performance is powerful as a Franklin who simply cannot collaborate with others, a failing that ultimately leads to Watson and Crick upstaging her. Franklin, as depicted here, was a woman who was not accepted by her male colleagues because she wasn’t womanly enough. Watson, Crick, and Wilkins repeatedly refer to her by the diminutive “Rosy,” though she detested that name, preferring Rosalind. They joke about her behind her back, though Wilkins develops a grudging admiration for her that, according to Ziegler, reached toward love. What none of them can accept is that she is the beating heart of this research, which could not have uncovered what it did without her nearly fanatical devotion to the methods she believed in.

As Wilkins, Nathan Hosner is all stiff upper lip British, a shy, socially awkward man who has no clue how to handle this fireball of a woman he is supposed to work with. Hosner handles Wilkins’ growing feelings for Franklin with the same kind of quiet dignity and frustration that he shows in his professional dealings with her, and we are asked repeatedly to ponder what might have happened for both of them had they made different decisions, a bit of melodrama that succeeds in tempering the drier scientific exploits while helping us to see that what did happen was probably inevitable, given the personalities involved.

As Watson, Alex Goodrich is easy to dislike: an aggressive, opportunistic young upstart American scientist who eventually will be the one who, seeing Photo 51, recognizes the double helix shape. Goodrich, also taking cues from Watson’s book, shows us a man who wears his sexism plainly but also one who is as giddy as a schoolchild as he is uncovering the mystery that will make him famous. Nicholas Harazin’s Crick is more contained: a quiet, observant man, but one whose scientific zeal eventually causes harm to his marriage. His wife Odile is almost a seventh character here; she never appears but we hear a lot about her. In this world, only the men play roles that are worth depicting, and Franklin is intruding on their club.

Easily the most sympathetic portrayals are Gabriel Ruiz’s Gosling and Yousof Sultani’s Caspar. Both of these men gently butt heads with the triumvirate of Wilkins, Watson and Crick in their depictions of Franklin, seeking to show a softer and more human side to a woman whom the others see as simply difficult. Ruiz and Sultani act as the consciences of the play, countering the central narrative of self-destructive drive (her death from ovarian cancer is attributed here to exposure to x-rays, which Gosling warns her against repeatedly) with one of a woman in a man’s world whose focus on her job is the only way she can compete. But Franklin can’t finish the job because of a central flaw in her character: she lacks the ability to take a leap of faith, to theorize something and then see if it is true. Instead, she tries to expose what is true based on the research she is doing, which (without any hypothesis) is a long, stressful, difficult way to proceed.

Photograph 51 succeeds in showing us a (somewhat simplified) view of the life of a woman who bucked the odds against her as a female scientist in the 50s to do research that directly led to one of the great scientific discoveries of the 20th Century. Her early death prevented any possibility of a Nobel Prize (which is never awarded posthumously) but this play argues that her own aloofness and egotism played as much of a role as any in her failure to recognize the reality that her famous photo showed. The play shows the extreme difficulties that she probably had in being taken seriously, but it also shows her pushing people away who might have been able to do so. Cross’s strong performance and Ziegler’s intense script give us both of these aspects of Franklin and we end up caring for her despite herself. Ultimately, the play depicts Franklin as her own worst enemy, which may or may not have been the case. It is perhaps limited in its dramatic potential because of its subject matter, but Ziegler’s focus on the dichotomies of personality between Franklin and the team of Watson and Crick at least tries to humanize what ultimately is the story of a research race. It’s a fascinating play if not a particularly powerful one, and though the depiction of Franklin as a figure who is culpable in her own failing raises the stakes toward the tragic, ultimately it is more of a history play.  It’s a play you’ll come away from with a much greater appreciation for the tedium of scientific research, but it is not itself tedious. What it lacks in pure emotional connection it makes up for in an interesting story and a brilliant design.

In the end, though, it seems to be a play that doesn’t fully trust itself. It needs to reach for the potential romantic entanglements with both Wilkins and Gaspar in order to humanize a character it simultaneously asks us to see as passionate only in her attention to her work. As in the story within the play of Wilkins and Franklin crossing paths but not meeting at a showing of A Winter’s Tale, we wonder what could have been if Ziegler had more faith in her subject matter.

Photograph 51 is now playing at Court Theatre, 5535 S Ellis, Chicago, until Feb 17. Check the website for specific dates, times, and tickets. Find more information about current plays in our front page recs and at theatreinchicago.com.