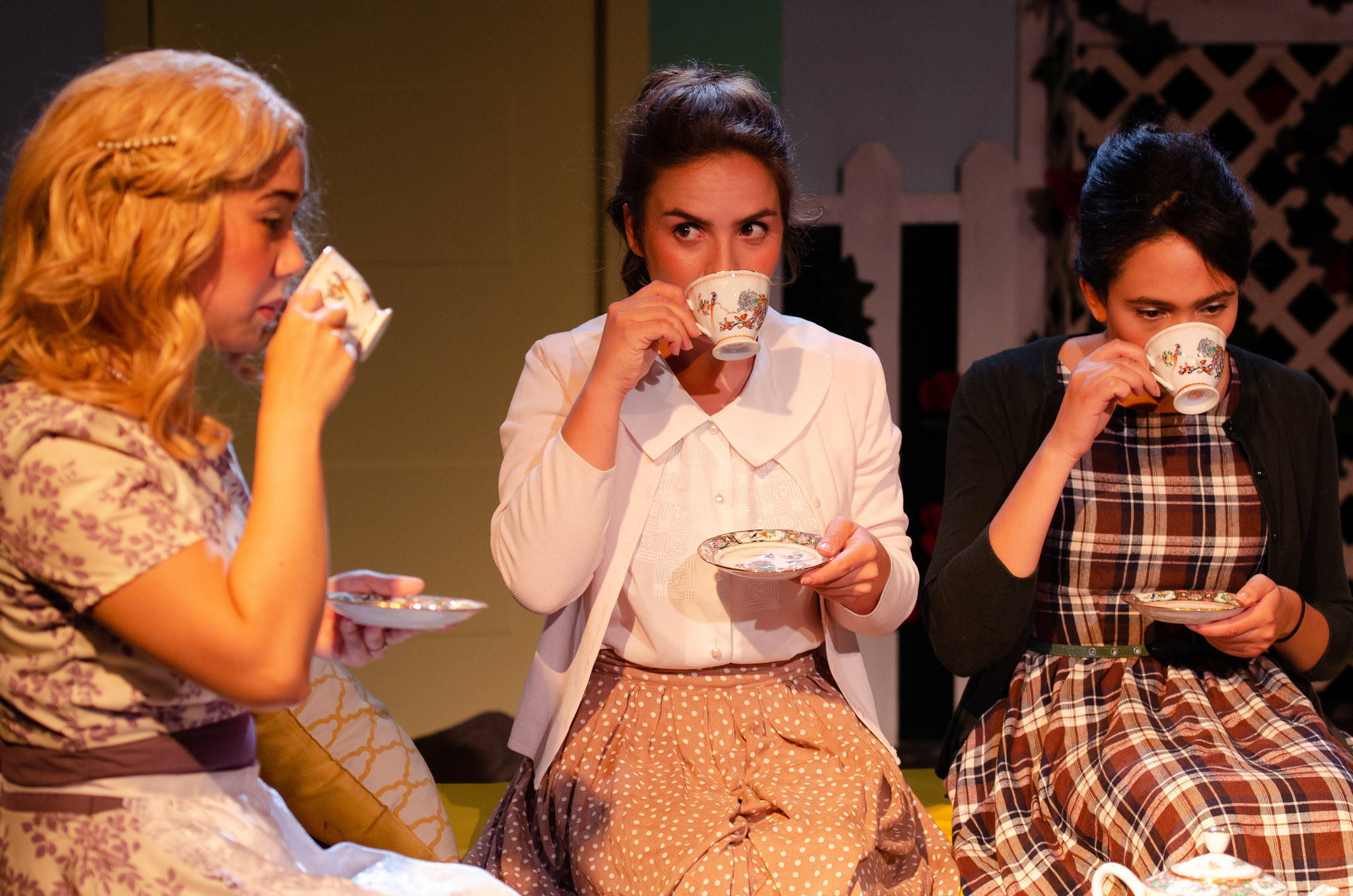 What is the nature of Fate? Is it something that is utterly inescapable, or is it the simple byproduct of the decisions that we make? If it is the latter, is it then malleable? And when is it a good idea to abandon what you’ve been taught is “right” in order to effect some kind of change? These are some questions asked by the new play by Jami Brandli now playing at the Athenaeum Theatre, “Bliss (or Emily Post is Dead),” the final production in Promethean Theatre’s season.

In this play, Brandli envisions a 1960 North Orange, NJ in which reincarnated Greek heroines Clytemnestra, Medea and Antigone are doomed to destroy their lives for the umpteenth time (“repeating and repeating” their horrible ends, as the playwright informs us) under the watchful eyes of the God Apollo…unless Cassandra, the woman Apollo cursed with the gift of prophecy that no one would believe, can finally get through to one of them. And, sick of living the same life (and death) again and again, she is determined to try.

Did I mention that this is a comedy?

Yes, it seems mighty weighty material to be handled in a light manner, but Brandli’s clever script deftly paints the three tragic figures with enough comic playfulness that we are invited to laugh as they go through the reiterated motions of their own damnation: a wonderful narrative trick that works because of excellent writing and even better performances from a stellar cast under the strong direction of Anna Bahow. 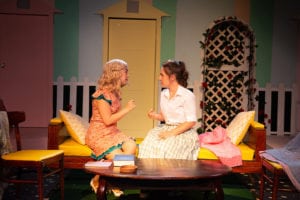 Alice Wu plays Maddie (Medea) at a fever pitch, throwing herself into this drug-addled half-Hawaiian housewife and mother with everything she has got, wonderfully entertaining whether Maddie is desperately trying to get Emily Post to answer a letter about crumpets, over-relying on Post’s teachings on etiquette, or falling apart into a twitchy and profane downward spiral as she learns the truth: her husband Jason, with whom she is desperately in love, has betrayed her. Those who know Medea’s story can easily predict the future of this part of the tale unless Kaci Antkiewicz’s humorless Cassandra can convince her that, in this modern world, she actually can choose her own destiny.

That is the lesson she also tries to impart to Jamie Bragg’s Clementine (Clytemnestra), whose husband Arthur (Agamemnon) is constantly away and constitutionally unfaithful. Cassandra most desperately needs to get through to Clementine, for it is Clytemnestra who has killed her over and over again for millennia. But Clementine is trying to get past her husband’s cheating in her own way: by having an affair with her doctor (Jared Dennis, who also plays Apollo as a conceited, hilarious, self-centered god who can’t get over the death of his one true love, Hyacinth, and still, after all of this time, can’t figure out how Cassandra ever could have turned him down) 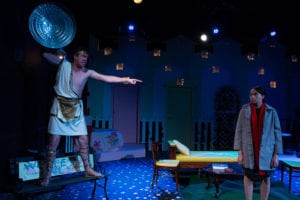 (If you’re not fully up on your Greek mythology, Promethean has some nice lobby displays to help you with that, the women’s movement, and the civil rights movement, all of which play important roles in the play.)

Perhaps most likely to be swayed by Cassandra’s newfound intensity is Kellen Robinson’s Antonia (Antigone), who is under the thumb of her nasty uncle Creon and desperately wants to be free to do her own thing, which involves dating a very nice black boy at the school dance. (The play has echoes of Black Lives Matter as well as #metoo as it explores these issues in its 1960 setting. Apollo has even arranged for Cassandra to be black this time in order to make it even less likely that she will be listened to.) Antonia rejects suicide, at least for the moment, almost believing Cassandra’s prophecy that she will do great things. But Cassandra needs absolute belief in order to break her own curse.

Antkiewicz is wonderful as Cassandra, whose lines are far more formal in tone than the rest of the cast and whose solemn pronouncements (“there will be two small deaths”) are just cryptic enough to be missed by the other women. Apollo continually asks her why she has no joy in her life, but Cassandra cannot feel joy (she can’t even tell a joke) until something changes for her in the seemingly endless cycle of life and death, until she finds a way to prove that “anything is possible.” 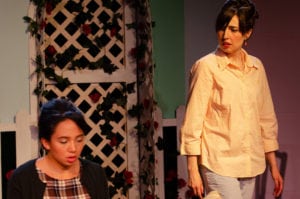 Bahow’s direction is sharp as she wisely plays up the comic elements of the script (knowing that the dramatic moments will take care of themselves). Her touch is clear from the opening tableaus: three women speaking their (funny) letters to Post while primping with their compacts. She makes good use of Jeremiah Barr’s tight, colorful, kitschy and utterly adorable set, which sets up about six different locations in front of a backdrop of the endless repetition of North Orange, itself a symbol of what Cassandra has been going through. Costume designer Carrie Campana is also on her game, as these characters are overtly defined by what they are wearing. It’s a fun play to watch as well as to think about.

The script is not perfect: Brandli’s attempts to meld some classical language into the contemporary dialogue sometimes comes off a bit stiff. And Cassandra is very dark to be the center of a comedic play. But overall the inventiveness of the concept wins out. It isn’t easy to make unemotional Cassandra into the play’s heroine, but Brandli, Bahow and Antkiewicz pull it off. It may be very difficult for her Greek figures to find their “bliss” in their apparently doomed lives, but Brandli holds out that possibility and keeps us laughing while she does it, even if at times the laughter is a bit uneasy due to what we know is happening. Still, her goal is to show us that change—even difficult, painful change—just may be achievable and, if it is, then anything can be.

Bliss (or Emily Post Is Dead) is a Promethean Theatre production now playing at Athenaeum Theatre, 2936 N. Southport, Chicago, until August 25. Performance times may vary; check the website at Athenaeum Theatre. Find more information about current plays on our Current Shows page and at theatreinchicago.com.