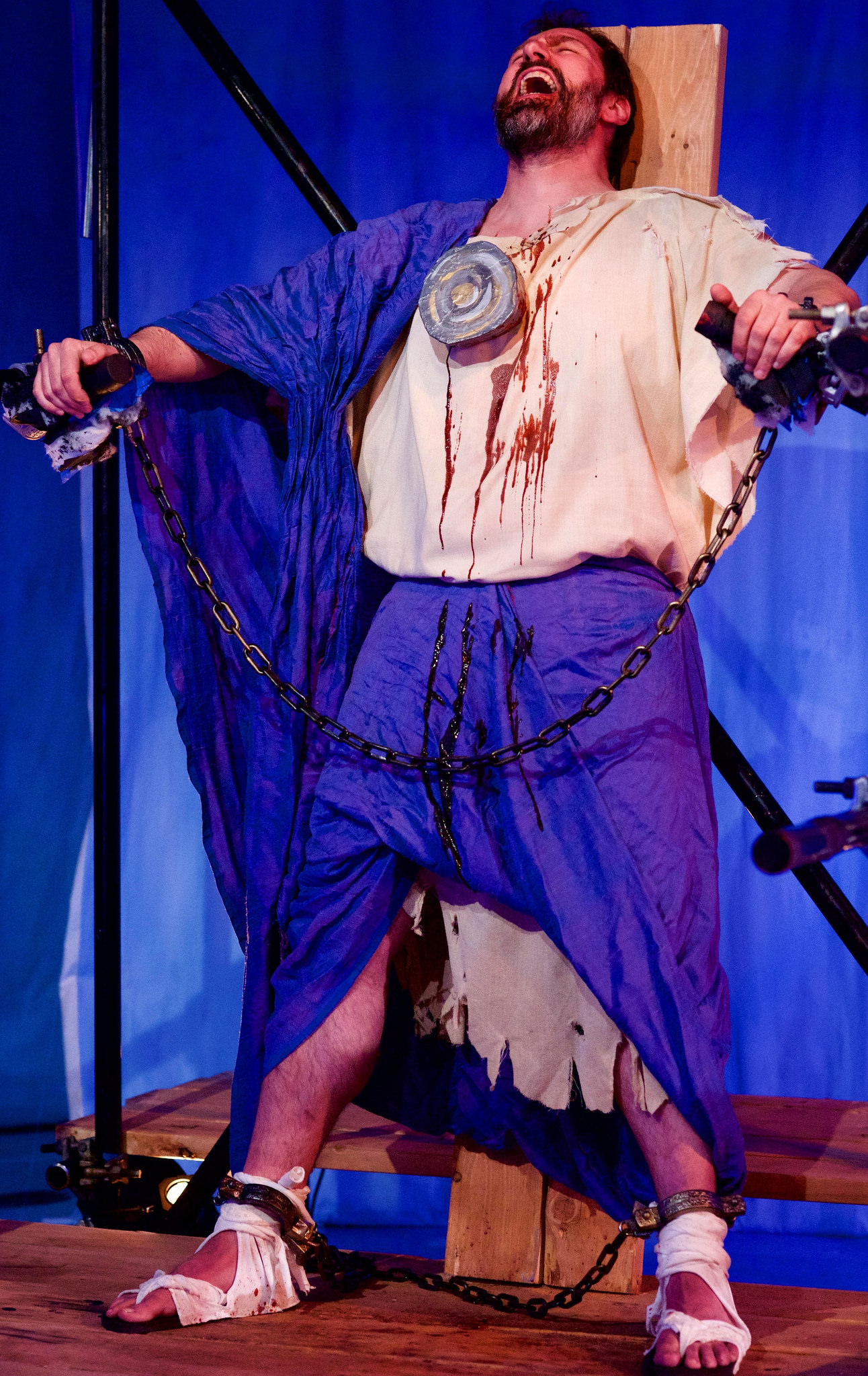 Is it possible to admire a production without actually enjoying it? Yes. Prometheus Bound offers much to admire.

Imagine a character who is chained to a rock for hundreds of years being portrayed on stage for 85 comparatively long minutes. Mark Pracht is powerful in this highly demanding role — impaled, agonized, defiant, and justifiably complaining — everything but sympathetic. He doesn’t deserve this plight for stealing fire and giving it to mankind, and Zeus — King of the Olympian Gods (never seen) — is cruel and merciless.  Sadly and ironically, his plight is one Prometheus foresaw for himself and still entered willingly. 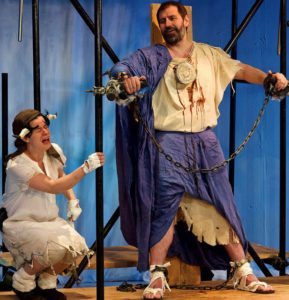 More sympathetic is Kat Evans playing Io. She, too, has angered Zeus when she spurned his affection. Now she has been turned into a cow. As if this weren’t bad enough, the cow is constantly besieged by gadflies. Oh, how she can twitch — non-stop. One grows itchy just watching. If there ever is a casting call for a character suffering with St. Vitus’ dance, Evans is a shoo-in for the part.

Most admirable, a splendid array of puppets– ranging in size and supported by an anticipated Greek chorus — interact with Prometheus. Created by VanOrthal Puppets, these three-dimensional portrayals of the Gods are worth the price of a ticket just to see the complex structures and the ways the skillful puppeteers manipulate them.

So why isn’t it enjoyable?  Perhaps it is too static — too talky, moving too slowly.  Perhaps because there is no stress on the value of Prometheus’s sacrifice — we see the punishment but not the value of the crime. Perhaps it is overkill — too much of a good thing.

A raised platform on the left side of the stage has chairs reserved for six women and one man. The women provide the chorus, the man (Charles Schoenherr) speaks in an effective, booming voice for the male puppets. Huge puppets, mounted on metal structures and often manned by more than one puppeteer, represent two of Zeus’ enforcers Power and Brute Force while a third is Hephaestus, blacksmith of the gods. Later, we will meet an even more elaborate structure representing Oceanus, a personification of a river circling the earth. He is riding a colorful hippocampus — half horse half fish. 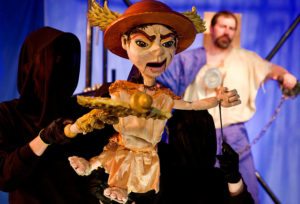 More puzzling are three black-clad puppeteers — carrying poles topped by enormous sparking beaded structures and hanging glass globes — who meander in various patterns, while the chorus sings accompanying songs. Who are they and how do they further the plot (such as it is)? Their movements become so mesmerizing that members of the audience must prop up their eyelids. Both the program book, and the explanation offered by Cynthia Von Orthal in a “meeting with the puppets” following the play, describes them as the 3,000 Daughters of Oceanus. Whatever is happening with the dialogue between Prometheus and those visiting him is lost at this point — drowned out by the songs, colorful lights, and twirling movements of these three.

The final puppet — appearing near the end of the drama — is Hermes, messenger of the Gods, who is much smaller with a distinct, feisty personality, a somewhat startling but welcome change of pace and tone.

This world premiere translation of Aeschylus’ play is by deservedly admired Nicholas Rudall, Founder and Artistic Director of Court Theater and an Emeritus Classics Professor at the University of Chicago. I wish the program book had quoted some of the more pithy lines, as unfortunately they are overshadowed by the dazzling spectacle.