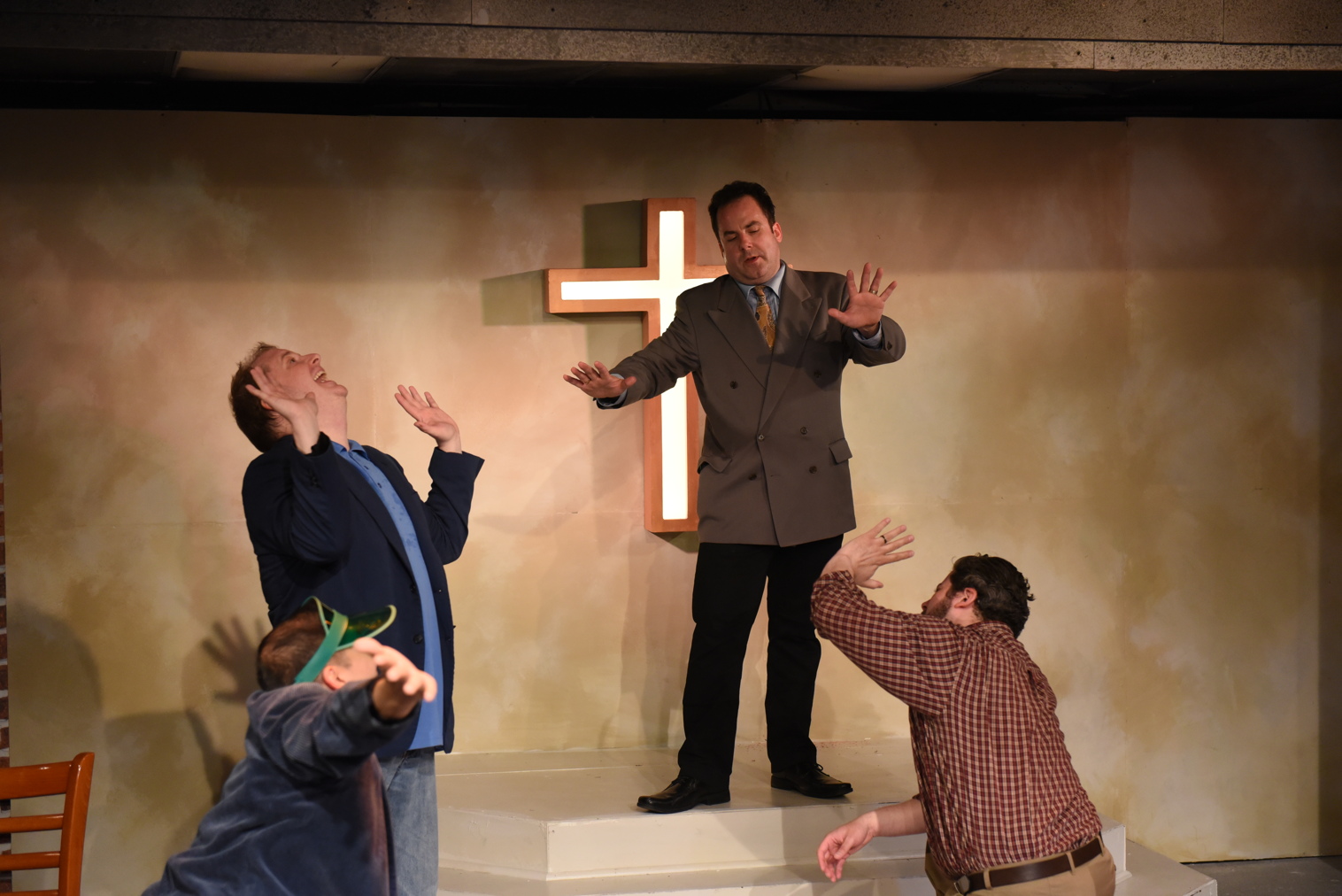 Religious televangelists, with their megachurches, their jets, their nine-figure incomes, and (sometimes) their hypocrisy unveiled for all of their congregations to see, are such a ripe topic for satire that it’s almost amazing that Anthony Tournis was able to write his comedy Prophet$ without worrying about reusing tired tropes. But the fact is that, though such characters do pop up in other plays, Tournis’s play is one of the only comedies I know that is squarely set in this world, and he mines it for all of the absurdity that he can. And director Wm. Bullion has taken the play and gone even beyond the author in this Factory Theater world premiere production.

Tournis’s premise is simple: televangelism is a world of con men. There may be sincere, God-fearing men out there somewhere doing it, but let’s face it: putting religion on TV is, first and foremost, a money-making machine. Watching televangelist Rev. Leslie Goode (Timothy C. Amos) on TV one night, down on his luck con man Vic (Tournis) has an epiphany (accompanied, I might add, by a chime sound effect): anyone could do that and make a fortune. With his partners Seth (Eric Wang) and Owen (Eric Roach), he heads to Texas to found the Church of the Prophet and, sure enough, they are soon rolling in dough. They even attract the attention of another con artist, Darla (Ashley Yates), who crashes their live show one Sunday declaring herself to be Vic’s wife, thus forcing them to accept her as a fourth member of their little troupe.

Unfortunately, they also attract the attention of Goode, who has made his name (and his fortune) by ruthlessly driving all competition out of town. Now, with the Church of the Prophet seriously eating into his bottom line, Goode comes gunning for them.

Prophet$ is a slick, silly, enjoyable, often hilarious comedy, and Bullion adds layers to it with inventive movements, reactions, line readings, and set changes. Of course, with the playwright in his cast, it’s hard to say where ideas originate, but the director’s touch here does seem significant. There are even richly comic dance breaks as the con artists celebrate their successes, and Bullion gets everything possible from his excellent cast.

Tournis makes a very good “pastor,” appearing more relatable than even the real thing (Goode), as several characters avow. Among these are Kirk Jackson’s Red, who helps set up the new preacher in town, and Agnes (Lorraine Freund), an older woman who finds that he has touched her soul more than anyone ever had. Roach is wonderfully over the top as Owen, called upon to play a lot of exaggerated moments. And Amos, his hair slicked back and his accent thick and syrupy, is a properly sleazy Goode.

Of course, both Tournis and Bullion know that the only way to be conned is to allow oneself to be conned, and they pay much attention to the would-be-ridiculous-if-it-were-not-true fact that so many people are willing to cough up so much money just for a few prayers from someone they often don’t even know. Their desperate need for such spiritual relief is lampooned when Goode is unmasked as a gay drug-user (and, yes, there is plenty of attention given to how wrong it is to out someone to gain an advantage and also, yes, it does make Vic much less sympathetic), and his congregation is quick to forgive him even though he has violated everything he ever preached about. (Sounds like the followers of a certain Chief Executive.) Still, as much as the play makes fun in the aggregate of the unwitting dupes of these unrighteous men, it has considerable empathy for the individual members of the congregation as represented by Red and Agnes.

Prophet$ gets a bit lost in its final act, as if playwright Tournis is uncertain how to give both “preachers” their comeuppance while still maintaining the level of absurd comedy he’s woven throughout, but the ending is nonetheless satisfying. Although it isn’t an extremely deep play, Prophet$ is certainly a fun and funny one that left more than one audience member convulsing with laughter on opening night. It’s well worth a trip to Howard St. to experience the latest offering from this little gem of a company.

Prophet$ is a Factory Theater production now playing at 1623 W. Howard St, Chicago through July 20. Check the website for specific dates, times, and tickets. Find more information about current plays in our front page recs and at theatreinchicago.com.