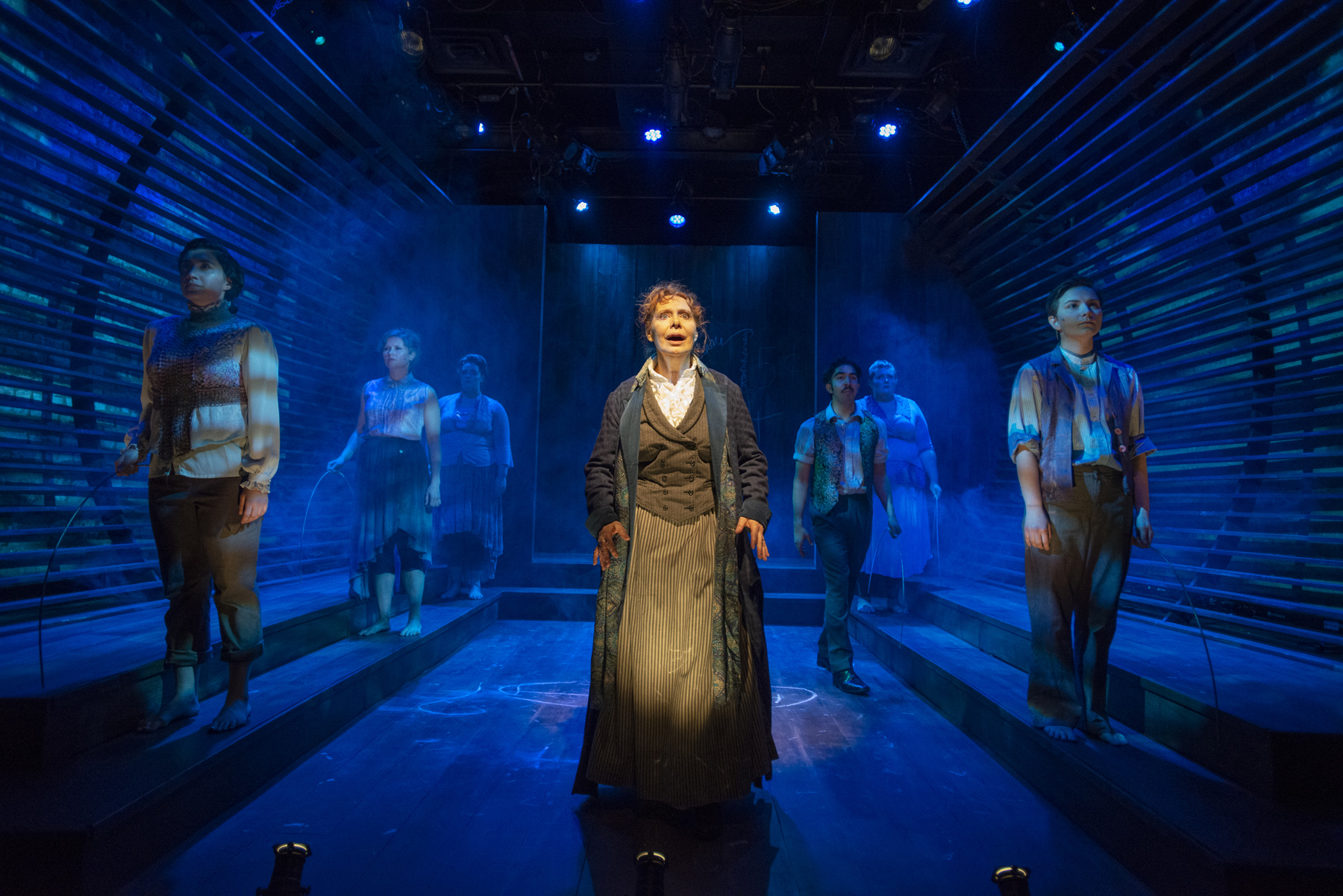 In a cynical world, fame can be a fleeting thing. One minute you are the talk of the town, and the next minute someone else comes along and your story is old hat. Though I could easily be referring to 2019, this was just as true over a century ago. In 1901, Anna (Annie) Edson Taylor made a name for herself by becoming the first person ever to go over Niagara Falls, which she did in a barrel of her own design. She had expected to be able to parlay that daring accomplishment into a comfortable living—which may in and of itself be a bit of cynicism about the appetite for sensationalism among her countrymen—but instead met with managerial misconduct and steeply waning public interest. Michael John LaChiusa’s haunting musical Queen of the Mist, presented by Firebrand Theatre, tells her story as the tale of a woman driven to do something significant with her life who, though she achieves her goal, falls short of her expectations.

In one of the year’s most outstanding performances, Barbara E. Robertson plays Taylor, a woman in her 60s who has tried various ways of making a life for herself but has found herself falling back on the charity of her sister. Though she feels she has “greatness in me,” she has no idea what it is until she hears the story of a man who died in an attempt to navigate the Falls. Certain that she can succeed where he failed by applying her knowledge of science, she designs a barrel that will be able to withstand the buffeting and jostling of a trip through the rapids and the waterfall. Robertson plays the role with a combination of self-confidence and desperation that makes Taylor a fascinating character, a person who dreams big and is able to follow through and, even as she is being crushed by the inevitable letdown of her expectations, remains true to her own unique set of ideals.

LaChiusa’s book has her coming into contact with other historical figures such as Carrie Nation (who belittles her deed as a mere stunt) and Leon Czolgosz, the man who assassinated William McKinley (not knowing what he is up to, she encourages him to follow his dreams). But the most important creature she faces is the vision of a tiger she once saw at a carnival as a child. The fact that she did not shrink from its presence back then enkindled her confidence to follow her dreams. As the play goes on, though, she begins to fear the tiger, which looms in her mind as emblematic of failure and death no matter what she has managed to do.

Taylor’s achievement, though, is only half of her story. LaChiusa spends all of Act Two following up the disappointing trajectory of her life in the ensuing years as public memory of her accomplishment faded and she passed from the brief light of fame into the obscurity of a star desperate to hold onto her light though it has gone out. Robertson is, if anything, even stronger as her character weakens: she keeps the spark of the dreamer alight even as Taylor gradually loses her sight and all of her hopes. As I said, it is a remarkable performance.

Robertson is backed by a solid ensemble of excellent performers including Max J. Cervantes, Neala Barron, Liz Chidester, Liz Bollar, Hannah Star and Maryam Abdi, who play all of the secondary roles and serve also a musical narrators of a sort, bringing beautiful and at times eerie life to LaChiusa’s music and lyrics. (Brianna Buckley will replace Bollar in the ensemble on June 15.) Elizabeth Margolius’s dreamlike direction combines with Cat Wilson’s lights and Lauren Nichols’ curved set (designed to resemble the inside of a barrel) to give the entire production an ethereal feel: we are somewhere within Taylor’s thoughts and dreams, experiencing the world as she does.

In the modern world, of course, though there are still daredevils left who seek to make their names by defying death (tightrope walking between the Twin Towers, as Philippe Petit did in 1974, strikes me as a solid example), it’s a whole lot easier to become famous—if that’s your goal—in less dangerous ways. YouTube and other online resources have made it possible to make money and a name for oneself without putting your life at risk. But the reality of temporary fame remains the same as it was in Taylor’s time. Just consider the number of child stars of television and film who have disappeared back into anonymity after a brief flicker of recognition. Queen of the Mist, telling this tale of a turn of the 20th Century flash in the pan, reminds us of this in a lovely, compelling, memorable production. With its final show of its second season, Firebrand once again has done itself proud.

Queen of the Mist is a Firebrand Theatre production now playing at the Den Theatre, 1333 N. Milwaukee, Chicago through July 6. Check the website for specific dates, times, and tickets. Find more information about current plays in our front page recs and at theatreinchicago.com.