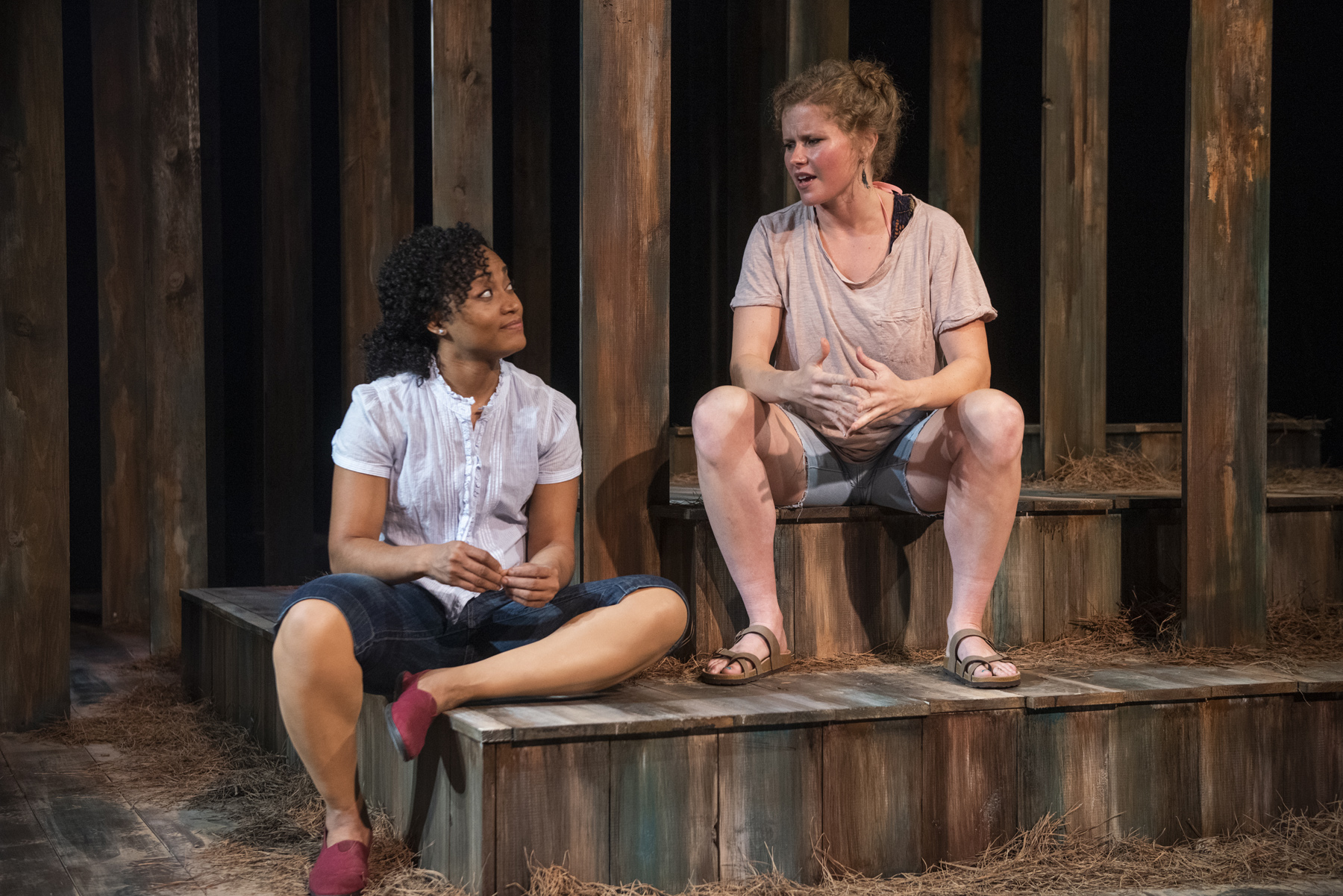 It isn’t easy to describe Rachel Bonds’ enigmatically titled Sundown, Yellow Moon, which includes songs with words and lyrics by The Bengsens, and even now, two days after I saw it, I’m not quite clear on how to put all of the pieces together. I’ve tried to begin this review about eight times now, I have written pages of prose, but I never manage to quite capture what I am feeling. The play does not have a traditional plot, and nothing of real consequence happens in it, but there is something intriguing about it nonetheless. In sixteen scenes, Bonds takes us into the lives of a family at a crossroads both individually and as a unit, and creates characters who may not be as fully drawn as they might have been in some other play, but—at least as portrayed by the director, Raven Theatre’s Cody Estle, and these strong actors—have an indefinable quality I don’t often find in plays: when it was all over, I wished I could spend more time with them.

There is an old Yiddish proverb that goes, “If you want to make God laugh, tell him your plans.” I don’t know if this ever crossed Bonds’ mind when she was writing her play, but the idea definitely fits the lives of the five main characters in this slice of life portrait of small-town living, in which people are trying to make the best of their lives despite the twists and turns that inevitably come from being alive.

Tom (Will Casey) is a well-liked, long-tenured teacher at a southern high school but, as the play opens, he has been suspended from his job for losing his temper with the school’s deeply right-wing, “whackjob” new principal. His anger management issues were also at the core of his recent divorce, and his daughters have both returned from Queens to try to help him during his current crisis. Ray (Liz Chidester) and Joey (Diana Coates) may be twins, but they are nothing at all alike. Ray is a “creative and messy” musician who has recently left her job because she is dating her boss, a woman twenty years her senior. She arrives home unsure of her relationship or her future, and she doesn’t seem to be able to write songs anymore. Joey describes herself as “a more Type-A, nerdy academic girl,” and in fact is about to head off on a two-year Fulbright fellowship in Berlin, the first time the twins will ever have been apart.

Neither girl, however, is exactly what she seems to be. Ray may be “messy,” but Tom sees her as the more dependable of the twins despite her sister’s academic bonafides. He worries much more about Joey who, for a girl who classifies herself as a nerd, has an unusual streak of spontaneity that apparently has gotten her into some trouble in the past. And she is clearly a restless soul: from earliest childhood, we are told, getting her to sleep was nearly impossible. Back home in this hot summer, she spends her wakeful nights running long distances in the dark, swimming in the local reservoir, or openly flirting with a teacher at the town college, Ted (Josh Odor). Ted is another sleepless, restless soul, an unfulfilled poet whose wife, an accomplished novelist, is on a book tour, and Joey remembers him from a reading he did at her high school in her senior year in which he read a poem that left a “deep impression” on her.

The other main character in the play is Carver (Jordan Dell Harris), a school counselor whom the principal has assigned to work with Tom on his anger over the summer. Carver, though, has his own issues. Not only is he the Pete Best—the member who left too soon—of a now-famous local band called Moonlight Miles, but he is also famous in town for another reason: in his childhood, he was molested by a priest. Though the offender was run out of town, Carver opted to stay there, where everyone looks at him and remembers his traumatic youth and his aborted musical potential. Still, Carver—who spends his own restless nights listening to his former bandmates on the radio—is the only character who has moved beyond the twisting roads of his life; the others are right in the middle of theirs.

There are two other characters in the play, neighbors and friends of Tom played by Rob Frankel and Jeanne T. Arrigo, who make a brief appearance to welcome Ray and Joey home and sing a song or two. Music is critically important to this play. Not only are both Carver and Ray musicians, but we see Tom trying to learn to play guitar. The songs sung throughout the play (both onstage and through the offstage “radio”) are woven into the play’s fabric. Like the play, their lyrics do not always tell an easy-to-follow story, but rather the songs suggest the changing moods of the characters.

Jeffrey D. Kmiec’s set takes its cue from a story that Joey tells Ted about a “visit” she had with the Cheshire Cat from Alice in Wonderland in which the feline philosopher advised her to “go deeper into the woods,” a metaphor for diving deep into experiences until it is “very dark, and wet, too dark to see for a while, and you will have to feel your way through,” because only then, when your eyes have finally adjusted to the darkness, can you see the hidden beauty of the world. Kmiec sets Tom’s cabin within the woods, leaving the small family to find the hidden beauty themselves. But he also does something unusual: while the cabin itself is realistic, the natural parts of the set—the hillside by the reservoir, the trees, etc.—are clearly artificial structures, suggesting perhaps that the deep woods that the characters need to navigate exist within themselves.

Estle, who directed Bonds’ Five Mile Lake, a similar play about people in a small town facing personal demons amid difficult weather (this time fighting against the winter’s bitter cold, rather than the summer’s oppressive heat), at Shattered Globe, knows how to empathize with her characters. He allows them to interact quietly, letting them slowly reveal what is within them. He does not need much movement here—most scenes are practically static—but in these moments he brings out the clearest, truest parts of them: Tom’s deep love for his children, Ray’s concern for her father and sister, Joey’s internal contradictions, Carver’s fight to deal with the emotional leftovers of his past, Ted’s desire for more in his life. None of these people are necessarily traveling the roads they planned to travel, but they all will survive, and the actors—especially Chidester and Coates—make this moment in their journeys compelling.

This is pretty much the definition of a “yellow light” play the way I rate things. I (clearly) found it fascinating, but it is not a play that will satisfy everyone who sees it. There is, as I have noted, no real plot, and nothing is really resolved. There are important things about the characters that remain unspoken (and I’m reminded about Hemingway’s dictum that the author should always know more than the reader—or audience—does). It’s a play with music, but the lyrics sometimes read as nonsense. (Even Ray’s final song, a sort of climax to her arc, is difficult to decipher: “I dressed up like a bird/ But I was a whale/ in the courtyard/ trying so hard/ to play your game/ Sea anemones/ make their enemies/ in the courtyard/ trying so hard/ in your name.”)

But maybe Bonds’ focus here is on an earlier song, one that Tom describes, perhaps tongue in cheek, as the best Ray ever wrote: “Well it’s a country song/ Everything goes wrong/ Yeah it all goes wrong/ It’s a country song/ You fuck it up in the end.” Life does not play out according to plan and, yes, there are always moments of “fucking it up,” but the end is only the end if you let it be. Sundown may end each day, but there is an infinite world to discover at night, or the next day, if you’re not afraid of screwing up or not knowing precisely where you are going.

Sundown, Yellow Moon is now playing at the Raven Theatre, 6157 N. Clark, Chicago through Nov 17. Check the website for specific dates, times, and tickets. Find more information about current plays in our front page recs and at theatreinchicago.com.