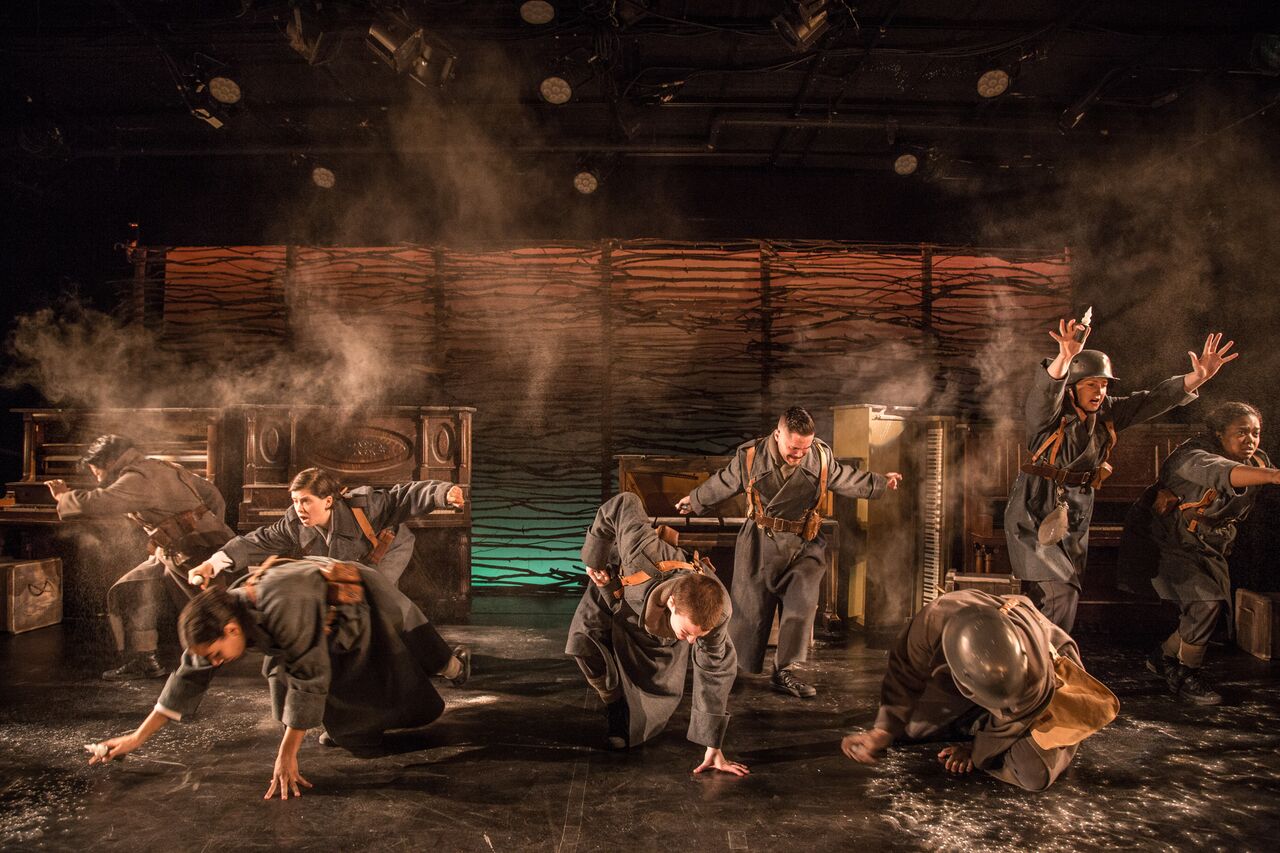 All Quiet on the Western Front by Erich Maria Remarque is probably the quintessential fictional account of WWI, a novel with German protagonists overwhelmed by the harsh realities of a war they had signed up for after being assured it would be honorable and that they were the “Iron Youth” who would win their country glory. What they found instead, of course, was trench warfare, gas, lice, death, and all kinds of hell. Matt Foss’s new adaptation of the novel for the theatre, recipient of the Kennedy Center National David Mark Cohen playwrighting award, finds its Chicago premiere with Red Tape Theatre, the gritty northside company that this year has put on a powerful production of Suzan-Lori Parke’s  In the Blood as well as the sharply political We Are Pussy Riot in its small Western Avenue home, The Ready.

This production, performed at Greenhouse Theatre Center, is outstanding: the twelve-member mixed race and gender ensemble, under Foss’s solid direction, beautifully captures both the chaos of war and the individuality of Remarque’s indelible characters on a creative set by Nicholas James Schwartz that uses early 20th Century pianos to form the trenches, their civilized melodies silenced by the conflict and replaced by occasional eerie notes plunked by cast members. It is also punctuated by anti-war rock anthems from the Vietnam Era, accompanied by Leah Urzendowski’s powerful choreographed movements that manage to be simultaneously orderly and discordant, reflecting the Remarque theme that the repetitive and exacting drills of boot camp become utterly useless in the pandemonium of actual war, where you can be cut down any second by a bullet or a bomb and where a dead friend’s comfortable boots can become a coveted prize worth having.

Elena Victoria Feliz portrays Paul Baumer, the narrator and central character of the story. In the novel, Paul is a poet, a writer who captures the horrors and absurdities he witnesses for us to read. Here, he is the mostly calm center of a group of high school students who manage to stick together for most of the conflict until, inevitably, they fall, one by one. Feliz is rock solid in this fairly quiet role, acting as our observer while trying to hold things together. She is especially powerful in scenes involving the first death among Paul’s friends and his trip home halfway through the war, in which he comes face to face with how little people back there, including the military back at base, actually understand what is really going on and just how much the war has changed him in a very short time.

Other key figures include Paul’s chums Muller (Colin Morgan), Kemmerich (Charlotte Mae Ellison)  and Kropp (Collin Quinn Rice), and several soldiers with whom he becomes friendly in boot camp including Tjaden (Alex Phan), Leer (Laila Rodriques), Kat (Caitlin Ewald), and Westhus (Joel Rodriguez). Ian Maryfield takes on the key role of the company’s commander, Lt. Bertinck, while Brenda Scott Wlazlo plays Himmelstoss, the abusive drill master from boot camp who ends up joining them at the front, along with several other roles. Bianca Canigila and Austin Rambo round out an exceptional cast, many of whom fluidly shift from one role to another during the evening.

In addition to Schwartz’s imaginative set design, All Quiet features Dan Poppen’s powerful sound design and Stephen Sakoski’s flawless lighting design, both of which enhance and define the more frightening sequences. And Rachel Sypniewski provides excellent costumes that easily convey the various characters that the actors portray. But this is definitely Foss’s baby. From the script that uses key scenes from the novel to stand in for the whole to the perfect musical decisions that blend with the moods of the moments being played to the use of small squeeze bottles to fling “dirt” into the air to signify bomb hits to the effective use of the set for both various locations and scene/costume changes, Foss’s stamp is all over this production, and it shows in the cohesiveness of the whole. Not every scene drives home the full emotional assault of the novel (for instance, Paul’s confrontation with his feelings about a French soldier he has killed, Gerard Duval, really needs more of the narrator’s reflection to make it work) but overall this play leaves you with the feeling that you and the ensemble have gone through far more than you bargained for. Wlazlo, speaking after the show to the audience on opening night, appeared visibly enervated.

Foss’s All Quiet on the Western Front is not a substitute for reading the novel, nor does he intend it to be, but it accurately captures the physical and emotional toll of this not-so-great war that Remarque defines so eloquently in his prose, and Red Tape’s production is impressive. It is an outstanding and memorable theatrical experience and the first great show of the fall season.

All Quiet on the Western Front is a Red Tape Theatre production now playing at the Greenhouse Theater Center, 2257 N. Lincoln, Chicago through Sep 14. Check the website for specific dates, times, and tickets. Find more information about current plays in our front page recs and at theatreinchicago.com.