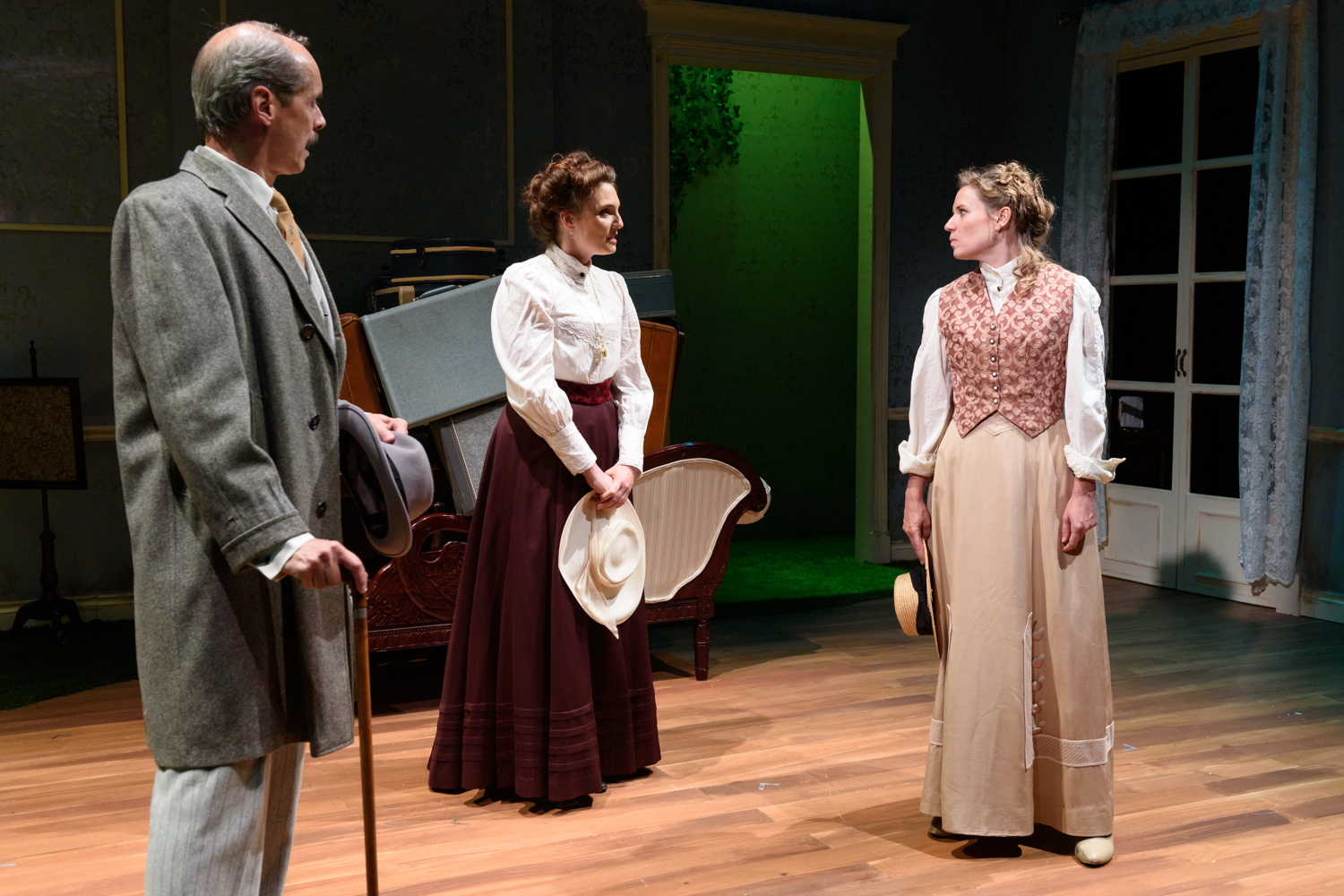 America has always prided itself on being the land of upward mobility. I grew up with that notion: work hard, get an education, and you can change your lot in life. In contrast to this American Dream, we learned in school that, elsewhere, the class system was historically a very rigid scheme in which movement between the classes was usually extremely difficult. No wonder so many people wanted to come here! And when we read novels by authors like E.M. Forster, in which we got an inside view of the way democracy and the class system worked in our closest international relation, England, we appreciated the beauty of the language and the richness of the characterizations but at the same time we felt a jolt of civic pride: these narrowly defined strata were part of someone else’s world, not ours.

Remy Bumppo’s new theatrical production of Forster’s Howards End puts those rigid class divisions into sharp relief. However, as I watched it in our modern version of America, in which more and more of our wealth is accumulated by fewer and fewer of our citizens while the middle class is squeezed into an ever-smaller piece of the pie and far too many of us are jobless or living paycheck to paycheck and barely getting by, it became clear that the world I was watching was not far removed from the one in which I am living. Our America, in which our long-prized promise of upward mobility is fading fast, has begun to look more and more like the distinctly divided societies we always believed ourselves better than.

Playwright/adapter Douglas Post and director Nick Sandys focus us from the beginning on the three central families of Forster’s novel: the very wealthy Wilcoxes, the comfortably wealthy Schlegel sisters, and the poor Basts. The Wilcoxes and the Schlegels represent two oppositional views of what to do with money. For the Wilcoxes, who made a fortune in the colonies, money is a thing to have and to keep within the family. In fact, the first thing we see them do in this play is to deny the last wish of their dead matriarch, Ruth, that her beloved home (Howards End) should be left to Margaret Schlegel (the indomitable Eliza Stoughton), whom she had befriended on a trip to Germany. The family, especially the younger generation, feel that such a bequest is vulgar and clearly suggests that their mother was not in her right mind.

Meanwhile, Margaret and her sister Helen (Heather Christler, giving the character a radical liberalism, an idealistic self-righteousness, and a youthful naivete), both highly educated young women, believe that the purpose of having money is to help others who do not. Not as excessively wealthy as the Wilcoxes, they still live rather carefree lives in their childhood home and spend their time aiding charitable causes until they meet Leonard Bast (Terry Bell), a poor clerk working in an insurance company. When they mention him to Henry Wilcox (Mark Ulrich), he immediately lets them know that the insurance company their new friend works for may well go under before the year’s end. Fearful for Bast’s livelihood, the sisters take it upon themselves to warn him and advise him to get a new position. Unfortunately for Bast and his common-law wife Jacky (Jodi Kingsley), he loses the new job fairly quickly in a downsizing, leaving them both on the street and penniless.

Thus we have three intertwining stories, and when Margaret implores Henry (to whom she has become engaged) to help Leonard out, he reluctantly agrees until an embarrassing revelation leads him to call everything off—including the engagement—and retreat once again into his insular family circle where his eldest son Charles (a patrician Michael McKeogh) and Charles’s wife Dolly (Emily Tate) have never trusted Margaret in the first place, convinced that she had indulged in some machinations to get Ruth to leave her Howards End. [Younger son Paul (Tommy Malouf), who once had a brief affair with Helen, and daughter Evie (Natalie Santoro), who are not in line to inherit the house, are not as caustic towards her.]

Post’s strong adaptation makes a clear argument that we are trending toward this kind of culture in which the poor are left to dangle at the whims of the rich, who despise the “educated elites” like the Schlegels who see it as their duty to right the wrongs of the world. But he (and Sandys) are careful not to villainize the Wilcoxes or to lionize the Schlegels. All of them make serious mistakes; none of them are either demons or angels. What Post and Forster are vilifying is the very culture that allows people like the Basts to suffer while others have far more than enough. The Wilcoxes’ wealth is highlighted by their penchant for collecting homes, even while some of them are left vacant. The well-meaning but somewhat careless liberal elites like the Schlegels, who at one point lose their home but are never in danger of starving or freezing because they do have an income, contrast with people like Henry Wilcox mostly because they wear their hearts on their sleeves while he keeps his under control.

Sandys’ direction is generally crisp and keeps the play moving along, though he does get a bit too clever at times, as when he uses his cast (mostly under umbrellas) to move furniture around in choreographed scene changes that mostly just get in the way, interruptions that thankfully vanish in the second act. Yeagi Kim’s set also tries too much, as it conflates a stately manor with a place for outside scenes, but the result is a bit of visual confusion as the “grass” becomes an astroturf carpet within the mansion, which also seems to have ivy growing up an interior wall. Kim’s projections, which help set the scenes, are lovely if a bit on the dim side.

Howards End is a well-acted play that illustrates the universality of Forster’s work. It may have been written in Edwardian England, but it is clearly just as relevant today in the US. I’m not sure that is a good thing, but Sandys and Remy Bumppo present their commissioned adaptation beautifully, helping Forster’s elegant social criticism to come alive. It’s a very fine production that opens their new season on a strong note and is well worth seeing.