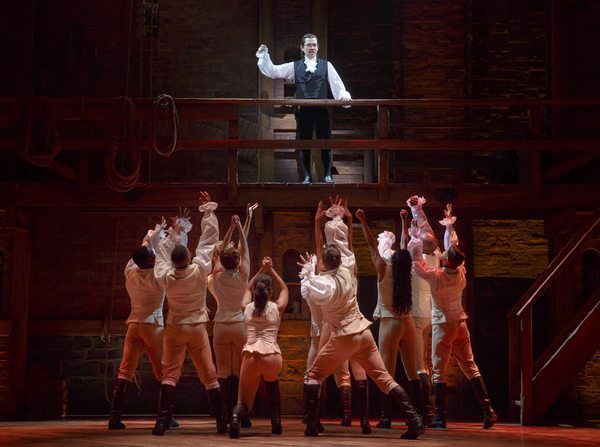 There is probably no theatre fan alive who has not by now heard of Lin-Manuel Miranda’s Tony Award-winning musical Hamilton, currently in an open run at what is now called the CIBC Theatre (formerly the Private Bank Theatre). The only question anyone might be asking at this point, as they listen to their teenagers incessantly singing the songs, is the most important one of all: is this play worth the hype and the tremendous expense of seeing it? Short answer: don’t throw away your shot. Having now seen this play for the second time in its Chicago incarnation, I can gladly state that not only is it everything you’ve heard it is, but it is absolutely game-changing in the world of musical theatre.

A sung-through rap musical with some 46 named songs, Hamilton sets a high standard for lyrical character and plot development that is not likely to be surpassed unless all musicals start employing rap as a major device (which would get old fairly quickly). The sheer volume of words in the lyrics to this show gives it the opportunity to paint both comic and poignant portraits of American historical figures as we’ve never seen them before, and Miranda (as is now well known) also cast them as we’ve never seen them, using people of color for all major parts (except King George, but we’ll get to that). The effect is dazzling: on an elaborate scaffolding set that could be a ship or a city or a large house or whatever it needs to be, actors sing, dance, and “tell the story” of a man who, for better or worse, left his mark on our nation. And every single moment is a new revelation. 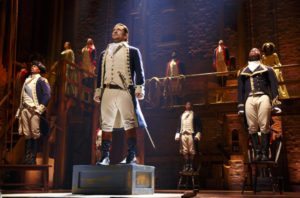 From the famous opening number introducing the main character (played in Chicago by Miguel Cervantes), Aaron Burr (a simmering Daniel Breaker) and others, through the Revolution and the fights for the structure of the new government, we are treated to something we’ve simply never seen before. Not even in Miranda’s In the Heights does he try anything close to the audacity of what he does here; that it works so well is a testimony to his ability as a writer and a leader of talent.

The emotional center of the story is…

Well, I was going to write that it is the relationship between the title character, his wife Eliza (Ari Afsar in a tender, fragile performance), and her sister Angelica (Karen Olivo in a huge, belting, dynamic one), and certainly anything that complicated—Angelica falls for him upon first seeing him but realizes that her younger sister does as well and gives him up to her but remains infatuated—surely would make a great central conflict. In most plays. This is especially the case because these two women are compelling on their own: Eliza is able to stand tough against her husband in his infidelity and yet the depth of her love stays with her to the end and beyond. Angelica is a seriously pre-everything feminist. 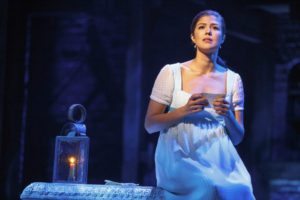 So men say that I’m intense or I’m insane

So listen to my declaration:

“We hold these truths to be self-evident

That all men are created equal”

And when I meet Thomas Jefferson (unh!)

I’mma compel him to include women in the sequel

Despite all of this, though, these women have to at least share time with two other powerful relationships that last and evolve for the length of the play, and both of these involve Hamilton as well…and two famous men. 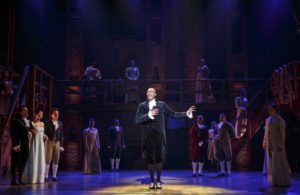 Cervantes plays Hamilton as a bright, “scrappy” young man who storms onto the American scene and simply demands to be heard, at first fomenting revolution, then demanding to be a part of it, and finally settling for becoming the right hand man of General George Washington (Jonathan Kirkland, so Presidential he even impresses King George—would we could say the same today) and starting one of the two other relationships that shaped his life. At first seen even by Washington as someone to tame, Hamilton quickly becomes indispensable to the General. He may not have field experience, but he has a quick mind and is an excellent writer, not to mention utterly indefatigable. Washington becomes Hamilton’s mentor and good friend and remains that way until he retires, and the other men sing, “It must be nice to have Washington on your side.” It is.

But there is another man in Hamilton’s life who figures much more prominently, as introduced succinctly in the opening song when Aaron Burr sings, “I’m the damn fool who shot him.” History records the story of that duel, and it is indeed played out in the musical’s second act, but until then these men develop as world class frenemies: from the moment they meet, they simply antagonize each other.

While we’re talking, let me offer you some free advice

You can’t be serious

Shortly thereafter, Hamilton ignores Burr’s advice completely, standing up for independence with three new friends in a bar and declaring that “I’m not throwing away my shot” at fame, heroism, and a role in the leadership of the new nation. He asks Burr, “If you stand for nothing, what will you fall for?” Their relationship is sealed.

Daniel Breaker brings such an intense passion to the role of Burr that he immediately distinguishes his portrayal from that of his predecessor in the role, Wayne Brady. Whereas Brady was big and bold and improvisational in performance, Breaker stuns with high tension and his scorching eyes that seem to pierce each audience member’s mind. He is capable of relaxing, as he shows in songs like “Dear Theodosia,” a tender love ballad, but he seems more at home letting the fire in those eyes loose in numbers like “Wait For It,” where it takes aim against his most obvious foe:

He exhibits no restraint.

and he keeps winning anyway.

He changes the game.

He plays and he raises the stakes.

And if there’s a reason

he seems to thrive when so few survive,

I’m willing to wait for it.

There is plenty of comedy to be found among the intensity of Hamilton as well. Thomas Jefferson (Chris de’Sean Lee, chewing lots and lots of scenery as he minces about in “What Did I Miss?”) is played as a man way too influenced by the “fancy” Frenchmen he’s been hanging with as ambassador for seven years. 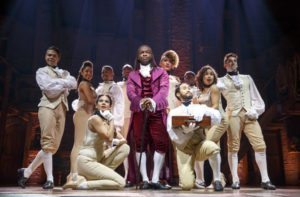 That opening bar sequence features Hamilton with three new friends, each trying to top the others’ revolutionary cred. But by far the biggest example of comic relief in the play has to be Alexander Gemignani’s effete King George III. He is brought out twice. The first time, he warns the Americans that, because he loves them dearly, he “will kill your friends and family to remind you of my love.” Later, when Washington is retiring, he wonders aloud about that (“I wasn’t aware that was something a person could do”) and laughs at what he assumes will be the end of America under John Adams. Gemignani milks every line and every movement for maximum laughter. The truth is, though, he doesn’t have to go very far with lyrics like: 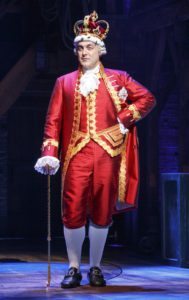 Next to Washington they all look small

All alone watch them run

So is it worth the money? Does it live up to the hype? I haven’t even mentioned the powerful poignancy of a song like “It’s Quiet Uptown” or the dark jealousies that pervade “The Room Where It Happened”: there is so much in this play that any three plays would be lucky to have it. The Chicago production of Hamilton makes me wish I had a mechanism to cover the whole page with green lights. It’s that good. Go see it.