good ensemble, but pacing and script issues get in the way

Most of the time, when you have a group of actors who create a blend of wild, over-the-top characterizations and a few more realistic ones, almost all of which work well and complement each other, you’d figure you have a truly great show on your hands. In the case of the Citadel Theatre’s Light Up the Sky, though, all of those strong performances never quite manage to overcome the one factor no one could do much about: the script. Written by Moss Hart in 1948, the story holds up quite well, but without writing partner George Kaufmann by his side, Hart’s comedy was always far too strained, far too dependent on those oversized, caricatured actor creations. As a result, a play that probably should have been far funnier slips on actors simply trying too hard.

Ironically, what I just wrote fairly mimics the story that Hart wrote: a new play inspires its star and director to give new heights of effort, only to discover later that there is no “there” there. A predictable but still enjoyable third act redeems the play-within-a-play and almost the whole thing as well, as Hart goes for fewer laughs and more sincerity, thus allowing the actors to tone down their performances as well. Art imitates…well…itself.

The whole play takes place in the hotel suite of famous actress Irene Livingston (Laurie Carter Rose), who has fallen in love with this play and wants it produced. Eric Luchen’s very nicely designed set serves director Pat Murphy well, giving him several interesting spaces in which to craft scenes. Groups of characters, as the play wears on, claim these areas for themselves. Irene’s mother Stella (Lauren Miller), described by another character as “a breath of foul air,” and Frances, the producer’s nasal diamond and mink covered wife (Sarah-Lucy Hill) commandeer one-third of the room for an ongoing game of gin (played while drinking most of the gin in the room). Peter, the young truck driver-turned-playwright (Jordan Golding) sits in the center and is joined by a revolving group including Irene, another playwright, Owen (Chick Quinn), and occasionally (once she has abandoned her own station stage right) Irene’s ghostwriter Miss Lowell (Irene Currie). 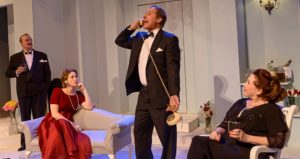 Fitzgerald is established first as a man who suffers from a kind of emotional flop sweat: he cries over everything. Isaac milks the early scenes dry establishing him, and he’s easily one of the early hits of the piece. In fact, the others joke about his propensity to state (truthfully), “I could cry.” Later, it’s Black’s turn, and in Frankel’s hands this character is absolutely the standout of the ensemble. Wandering about the stage, waving and gesticulating and speaking in a broad accent that seemed to me to be Archie Bunker crossed with Mel Brooks, Frankel’s character (who is, after all, the play’s producer, “the guy who bought the ink for the Declaration of Independence”) simply takes over whenever he appears.

Contrast this to the understated turn by Golding, whose shy playwright finally has a third act moment for himself once he realizes that the “humanity of these theatre people” that has so impressed him, people he has seen as possessing the “wonderful courage of dreamers and fools,” has been a facade. He chides himself, “embarrassed by my wide-eyed idealism.” Just imagine: something in the theatre isn’t real. Go figure. When he realizes that, as Owen tells him, “fine brave big words are as hollow as the people that spoke them,” he understands that it is time to leave.

More than once in the play, Hart tries to work in the concept of metaphor and allegory, and of course (as I mentioned at the top) the whole play-within-a-play is, in fact, an allegory…for the action of the play itself. When the characters find they can’t understand the play, its marvelous impressionistic feel suddenly becomes “a picture of two grapes and a grapefruit rind.” Even Sidney acknowledges that he no longer believes in it…until the morning brings positive notices. 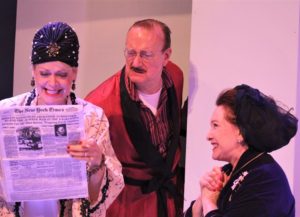 Late in the third act, someone speaks of “the difference between theatre folk and Dillinger,” and it makes us wonder what that is. Both are (obviously) trying to get money. Both put on a show. Both may even use a gun. So what is the key difference? The bank robber’s gun is real. Expecting reality from theatre folk, Hart tells us, is foolish, and judging them harshly for not being real is “the cruelty of innocence.”

It is reasonable, though, in coming to see a 40’s comedy, to think that it will not require the heavily stylized acting to build humor. The fact that this cast is up to the task says something about them (though the pacing was off at times and some lines were flubbed, which one assumes will correct itself as the run goes on). But because what George Kaufmann and Moss Hart writing together might have turned into huge laughs, Hart by himself could only wring small smiles from, they are simply asked to do too much. Too many characters are turned up to “11.” And we are left at times feeling as much outsiders in all of this as the “extra” playwright Owen Turner, who can’t even make Peter understand that he should never let someone else get in the way of his voice.