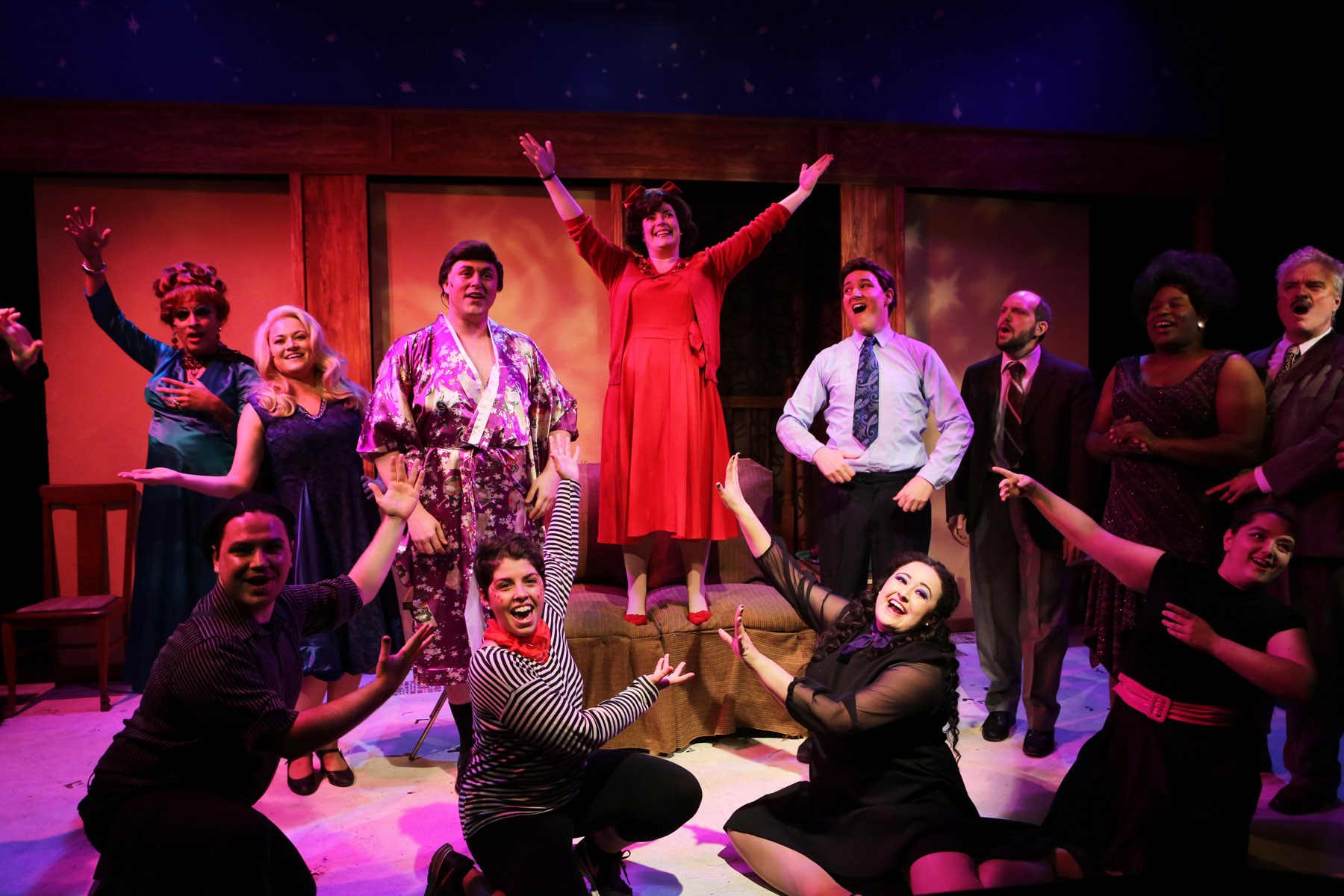 “When you think of your life as a movie,” the main character of Hell in a Handbag Productions’ latest show at Stage 773, “Bewildered,” asks, “do you see yourself as the lead?” Sadly, she then reveals that she does not: “I’m more like an extra; I’ve seen the leading lady, and she’s not me.”

For fans of the 60s sitcom “Bewitched,” upon which this parody is based, this will likely come as no surprise, as the main character here is Gladys Kravitz, the put-upon nosy neighbor of the Stevens family, a household full of witches and warlocks and other fun. In the show, Gladys was pure, silly comic relief: if the tension ever got too much across the way, if Darrin and Samantha were arguing about her overbearing mother Endora, cut to Gladys, staring out of some bushes with binoculars, desperate to figure out her neighbors’ secret. Definitely not leading lady material.

But it is the wonderful conceit of this show, with a book and lyrics by Ron Weaver and additional lyrics and music by Aaron Denham, to bring Gladys front and center. After all, everyone should be the star of their own stories, as even six-year-old Tabitha knows. And with Caitlin Jackson absolutely letter-perfect as Gladys, it is clear that it was time for this shadow character to come into the sun.

Jackson is a revelation: she can be funny and poignant simultaneously. She begins by letting us know the stakes of this moment: it is the last day of her life. And when she sings, “I have seen things that I cannot explain,” going on to tell us that (among other things) she was “bewildered” to witness a nun flying and a horse talking (script shout-outs to a couple of other less than grounded 60s sitcoms), we start to imagine what might happen if she could see what actually is going on in the neighbors’ home.

When we first meet Samantha (Elizabeth Morgan, who basically channels another Elizabeth M without trying to imitate her), she’s getting breakfast ready with a bit of the old nose-twitching. The magic here, when it occurs, is handled brilliantly by a choreographed group of four “Magic Stage Hands” who fly things through the air, remake burned food, whirl new sets into place, etc. It is a lovely device and, with the stylized makeup and the dance movement, I actually found it a bit hypnotic. I could have watched these four all day. But there are other matters at hand: Darrin (Scott Sawa) is engaged in yet another argument with Endora, and we hear this about the last one:

DARRIN: Until your mother turns me into a toilet brush or something.

SAM: It was a plunger.

Darrin gives her a look.

SAM: Well at least she changed you back before somebody used you.

Weaver’s book is full of witty dialogue like that, which means that the audience is almost always laughing. And if they are not laughing at dialogue or the equally witty song lyrics, they are laughing at physicalizations. Weaver and director/choreographer Brigitte Dittmars playfully rework the “two Darrins” boondoggle into a very literal situation in which Darrin has a magical doppelganger (AJ Wright, playing as flamboyantly gay as Sawa is strait-laced and uptight). It’s a bit of an internal contradiction because Darrin embraces it when he claims to abhor all uses of witchcraft and magic, but hey: the whole two Darrins thing was an internal contradiction too, and we were just supposed to ignore that, right? Besides, we get a heck of an entertaining Act Two song-and-dance number out of it.

Speaking of entertaining numbers, I have not mentioned the two most entertaining members of the cast: Endora, played by the inimitable David Cerda, and Uncle Arthur, usually played by Ed Jones but when I saw the show played brilliantly by understudy John Cardone. These characters know how to make entrances, and they are heavily assisted by Rachel Sypniewski’s costumes and Sydney Genco’s makeup. Endora’s gowns look as though they have used up the entire US sequin allotment for the next five years, and Arthur’s ultra-skimpy ensemble would make him a major hit on Fire Island, where he’s surely heading right after a tour de force number, “Let Yourself Be a Little Gay.” I have no clue what Jones does that is better than Cardone’s performance, but I want to go back to see it; if Jones is better, he must be amazing.

As for Cerda, here he is again in an over the top drag role and here he is again hitting it out of the park. He owns this bit. Just watching him as he tries to manipulate Samantha into fulfilling her witchly destiny is a special kind of magic. “Take the power that’s in your blood,” he sings, his hair a foot tall and fiery red, his earrings nearly six inches long and half as many wide, and all those sequins sparkling in the stage lights. How can she refuse? Endora looks confused as well. And when Cerda has a less flamboyant number, as he does in Act 2’s “I Made Magic,” the effect is simply powerful. (Of course there is comedy in it as well, mostly coming through interaction with Robert Williams, who as both Tabitha and Larry Tate’s wife Louise delivers quite a mini drag tour de force of his own.)

There are several other players as well, but the night belongs to Jackson and Gladys Kravitz. Through a fairly contrived (but again, who cares?) little plot device, she finally comes to understand a lot more about her world than she ever dreamed possible, and it changes her forever. She can be the leading lady of her own story after all. Ultimately, this is a very silly musical with a strong central message, one we could all use. And we could all use those magic stage hands too.