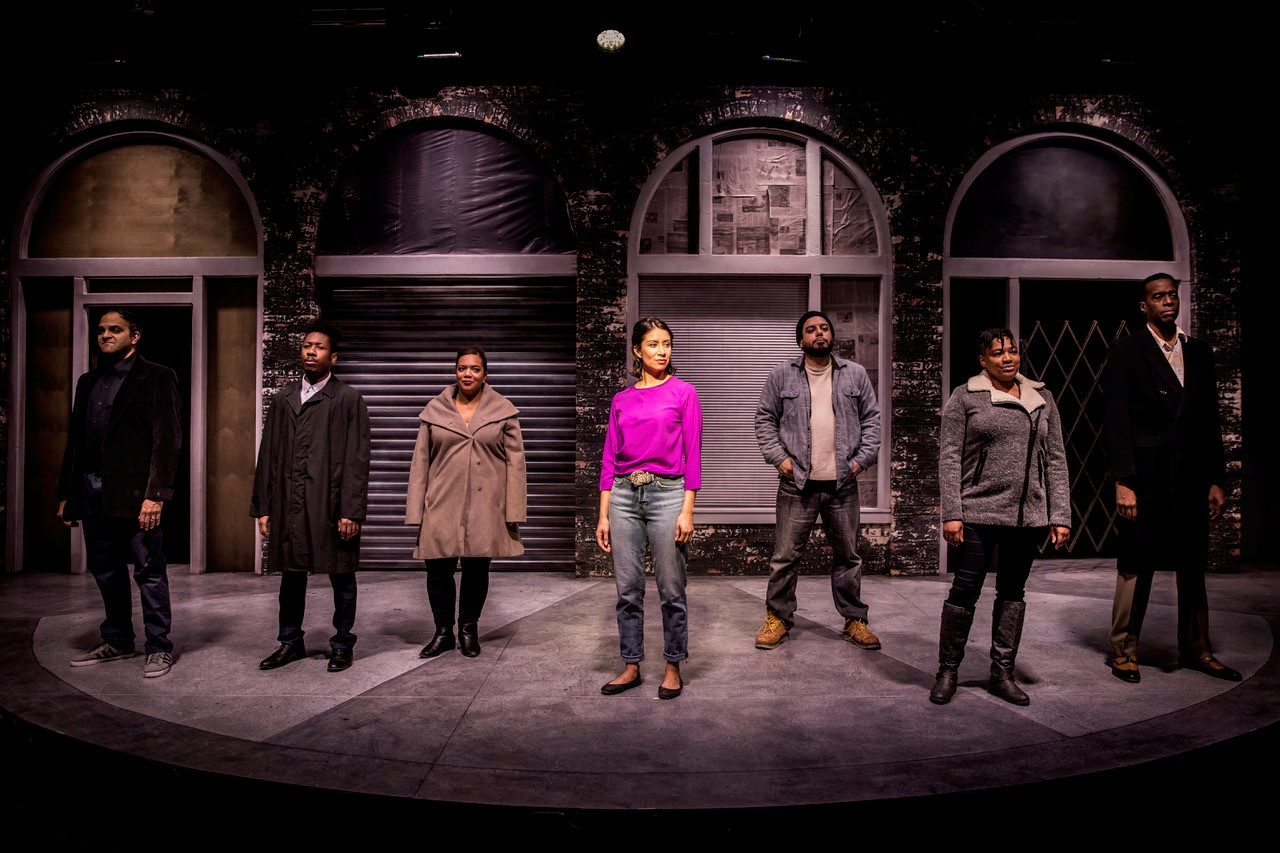 So here is a play about trying to fight corruption in Chicago politics. And among the credits is a choreographer, a composer for original songs, and a violence director. That tells you right away that Rightlynd, now playing at the Victory Gardens Theatre, is no normal political play. Its overall plot may be (depressingly) familiar, but Ike Holter’s new drama is anything but a regular night at the theatre. Making use of hiphop, dance (both serious and silly), 70’s-style power ballads, fourth wall breaking, comedy, and everything else that Holter can think of to throw in, Rightlynd (which is decidedly not a musical) is a political satire for a new era.

Holter’s inventive script tells the story of Nina Esposito (Monica Orozco), a young citizen of the fictional 51st Ward who is sick of the corruption that is allowing the ominous Applewood Foundation (headed by Jerome Beck as the embodiment of Applewood) to gentrify wards all over the city and cost people their homes and jobs. When Applewood comes to Rightlynd (as the 51st Ward is known), Esposito feels she must do something, so she runs for alderman to stop them. It wouldn’t be much of a play if she lost the election, so I don’t think that is really a spoiler. It’s what happens after she wins that pulls this play out of the ordinary.

Director Lisa Portes has assembled a tremendous cast (most of whom play multiple parts) and found ways to zip this play along. (Its 95-minute length feels a lot shorter.) The cast is tight and the dialogue is often quick—perfect for the slick-talking world of politics. While Beck is the face of gentrification, citizens such as drug-dealer Amena (LaKecia Harris), car dealer Robinson (“He has the cars!”) (Robert Cornelius), former felon and both True Believer and love interest Pac (Eddie Martinez), fellow True Believer Manda (Sasha Smith) and reporter Benny (Anish Jethmalani) are the faces of the community he is trying to remake. These “denizens” of Rightlynd quite reasonably detest what seems about to happen to their ward and throw their support behind the fresh new face of Esposito to try to stop it.

Esposito is all innocence and enthusiasm at first, but in true Chicago fashion she is quickly making shady deals with Amena and Robinson in order to get elected and maintain her power in the ward. The only question is whether she will stoop so low as to make a deal with Applewood, who portentously promised that she would eventually do so. Orozco is outstanding as the woman caught up in this whirlwind. She comes across as someone just enjoying the ride at first, and even as she is losing her grip on that innocence with which she began she has a kind of Kimmy Schmidt joy in being able to help. Kimmy, though, would never even think of some of the things Esposito does in her eagerness to maintain the original quality of her community.

Peck is both officious and menacing as Applewood even as the character grows a grudging appreciation of Esposito as his antagonist. Always looming, waiting for her to fail, he is a visible reminder of the forces she is up against. Opposed to him is Pac, the just-released felon who is the heart and soul of the piece. Pac believes in Kimmy Esposito from the start, even before he falls in love with her. Once he does, though, he becomes her right-hand man and protector as well as her lover, and Martinez plays him as sincere yet never innocent (even when costume designer Samantha C. Jones puts him in the most hilarious suit ever manufactured). A fight sequence in which both he and Orozco take on a gang of thugs is brilliantly done and witty thanks to violence designer Jaq Siefert, and to Portes’ credit the spunky Esposito gets her licks in as well as Pac.

The other actors are excellent as well. Jethmalani is perfect for the role of the reporter who believes he has latched onto the last honest and real politician in America. Cornelius is all bluster and anger as Robinson. Harris and Smith not only play their named roles well but serve as a kind of Little Shop of Horrors chorus to comment on the play as it moves along. Their costumes and choreography (the latter by Breon Arzell) are both on point, and they provide a wonderfully comic counterpoint to the corruption we both hear about and witness.

Technical elements are just as good. Collette Pollard’s scenic design, which wraps up the left wall of the house, suggests a seedy and dilapidated area with shuttered stores, etc. Lighting designer Jared Gooding has the challenging job of lighting both for reality (day and night) and fantasy sequences, and he hits it out of the park. Mikhail Fiksel’s sound design and original composition is perfect, and Charlie Coffeen’s original songs add humor to the mix. This is truly a group effort.

But it all comes down to Portes and Holter, ultimately. The clever and original script may not say anything really new about Chicago politics but it says it in a gloriously unconventional manner. And Portes gets strong performances from her cast, and, as I’ve noted, keeps things moving right along as she fleshes out Holter’s vision. Add to that a winning (and surprisingly emotional) performance by Orozco and you get a show that is beautifully alive and meaningful. Rightlynd is the right choice for just about any adult audience, but Chicagoans in particular should both recognize and love it.

Rightlynd is a Victory Gardens Theatre production now playing at 2433 N. Lincoln, Chicago through Dec 23. Check the website for specific dates, times, and tickets. Find more information about current plays in our front page recs and at theatreinchicago.com.