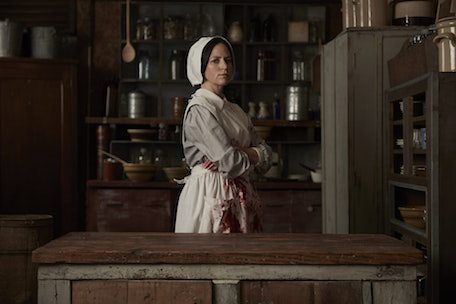 Alias Grace, a 1996 novel by Canadian author Margaret Atwood is a deep and unnerving psychological study of a real-life convicted murderer, Grace Marks, who prosecutors said helped commit a particularly heinous double homicide when she was just sixteen. After her death sentence was commuted, though, and for the duration of her life, there were many who questioned the official story. Atwood’s novel tries to get under the skin of her main character by using the conceit of a psychiatrist examining her fifteen years later. Rivendell Theatre, a company with a rich tradition of focusing on women in their contributions to theatre and to the world, has chosen Atwood’s novel and Marks’ story to end its 2017 season, aptly titled “The Mind-Body Connection.”

Working from a script by Jennifer Blackmer directed by Rivendell founding member Karen Kessler, the company’s version of Alias Grace naturally leaves out a lot of the book’s subplots and nuance, but what remains is highly charged theatre. From the opening beat, a dumb show of the events featuring Atwood’s “Ballad of Grace Marks” (ensemble member Jane Baxter Miller contributing the music) through to the final moment, the tension in the show’s atmosphere only lets down in certain flashback scenes in which we become privy to a pre-murder, much happier Grace. Any scene set in the present, and any in the past having any connection to the murders, has the potential to shock.

A word about Kessler’s direction here: exquisite. I’m not just talking about moving actors around, either. It takes a powerful and cohesive vision to get the kind of performances we see here. There are several times in this play when time is so fluid that a weaker director would have required some musical or lighting cue to help the audience see the time-shift, especially when it involves a single actor—Ashley Neal as Grace Marks—gliding from one time in her life to another. But no such clunky externals are needed here: Neal moves from moment to moment with the ease of crossing the stage, yet there is no one in the audience who doesn’t know where and when we have been transported to. When a director can accomplish this, the show is totally on point.

Kessler's direction is exquisite. It takes a powerful and cohesive vision to get the performances we see here.

As to Neal: as much as the show’s success depends on strong direction, there simply is no show without a strong Grace, and Neal is a great one. (And she can thank Rivendell member Kathy Longelin for the dialect coaching: she is flawless with her Belfast accent.) When she first appears, slinking along the side wall like the woman in “The Yellow Wallpaper,” keeping as much physical distance between her and this latest doctor as she can, we can appreciate her caution. She has, after all, been tried and convicted. “People want a guilty person,” she says. “They don’t like not knowing.”

Though Neal can’t pass for the sixteen that Grace was at the time of the murder, she can and does affect the attitudes and enthusiasms of a young, innocent girl. (One of her best such affectations: reacting to a ribald joke told by her friend Mary. Neal commits with her whole body, and for a second I do see the sixteen-year-old.) Her calm strength in the role grounds the play until the final scenes, in which she is allowed to cut loose with unexpected energy.

Other actors, too, are perfectly cast. Eric Slater makes a strong Dr. Simon Jordan, a deeply flawed man investigating Grace’s crimes for his own reasons. He tells us at the start that, as a “man of science,” he is not at all concerned about Grace’s guilt or innocence, and we accept this at face value. As more and more of his character’s flaws surface, Slater allows the cracks in the doctor’s originally perfect veneer to mount up until we start wondering why we didn’t see them all from the start. And when he repeats his earlier claim in the play’s second act, it’s a bit harder to believe him.

In addition to writing music, Jane Baxter Miller plays a manipulative society woman who, in seeking to clear Grace’s name, also has her own motives. She wants credit, wants to be seen as Important: compensation for a traveling, womanizing, spendthrift husband. Miller is an excellent complement to Slater; it is not clear until very late in the play who is actually “winning” their game of tug of war.

The murder victims are enthusiastically played by Charlie Strater and Maura Kidwell, the former with a noblesse oblige that allows him to act very informally among the staff, the latter with a kind of paranoid schizophrenia: Nancy Montgomery loves having Grace around unless Mr. Kinnear is home. When he is, the second female presence is no longer a comfort but a threat.

The other two men in the ensemble are each other’s opposite number: Michael Szeles as Jeremiah is the epitome of the gentleman and all sweetness and easy-going light. David Raymond as James McDermott could use a bit of variety in his approach to a character that could use a bit more rounding in the script as well. Other than one early step-dancing scene, even his tender moments seem angry.

The final piece of this puzzle is the other sixteen-year-old servant, Mary Whitney. Aysette Muñoz gives her exactly the right notes: playful and childlike while she is living and we see her in memory scenes with Grace, dark and demonic when she appears to haunt Dr. Jordan. Apart from Neal, this may be the play’s most diverse performance.

All of the elements of this play come together as perfectly as the quilt that Grace is making, which itself uses—as she tells us—winter colors, darker colors, reflective of the deep colors she sees in prison when she closes her eyes and turns them toward the sun. Reflecting on the propensity to make bold quilts to cover it, she asks, “Why do women make the bed the most noticeable thing in the room?” As if in rambling answer to her own question, she explores the bed’s importance in life: birth, sex, sleep, giving birth, dying...the bed is life and it is death. And in Grace’s case, with death being such a part of her life, winter colors seem very appropriate.

As I left the theatre, I passed a group of people discussing whether or not Grace was guilty. It seems to me that Rivendell has done its job well when we are not only left wondering, but we want to wonder. Atwood’s novel stays with you. I’m betting Rivendell’s play will too.

Alias Grace is now playing at the Rivendell Theatre, 5779 Ridge Ave. in Chicago, through Nov 4. Tickets are available from Rivendell Theatre. Find more information about this and other plays at theatreinchicago.com.