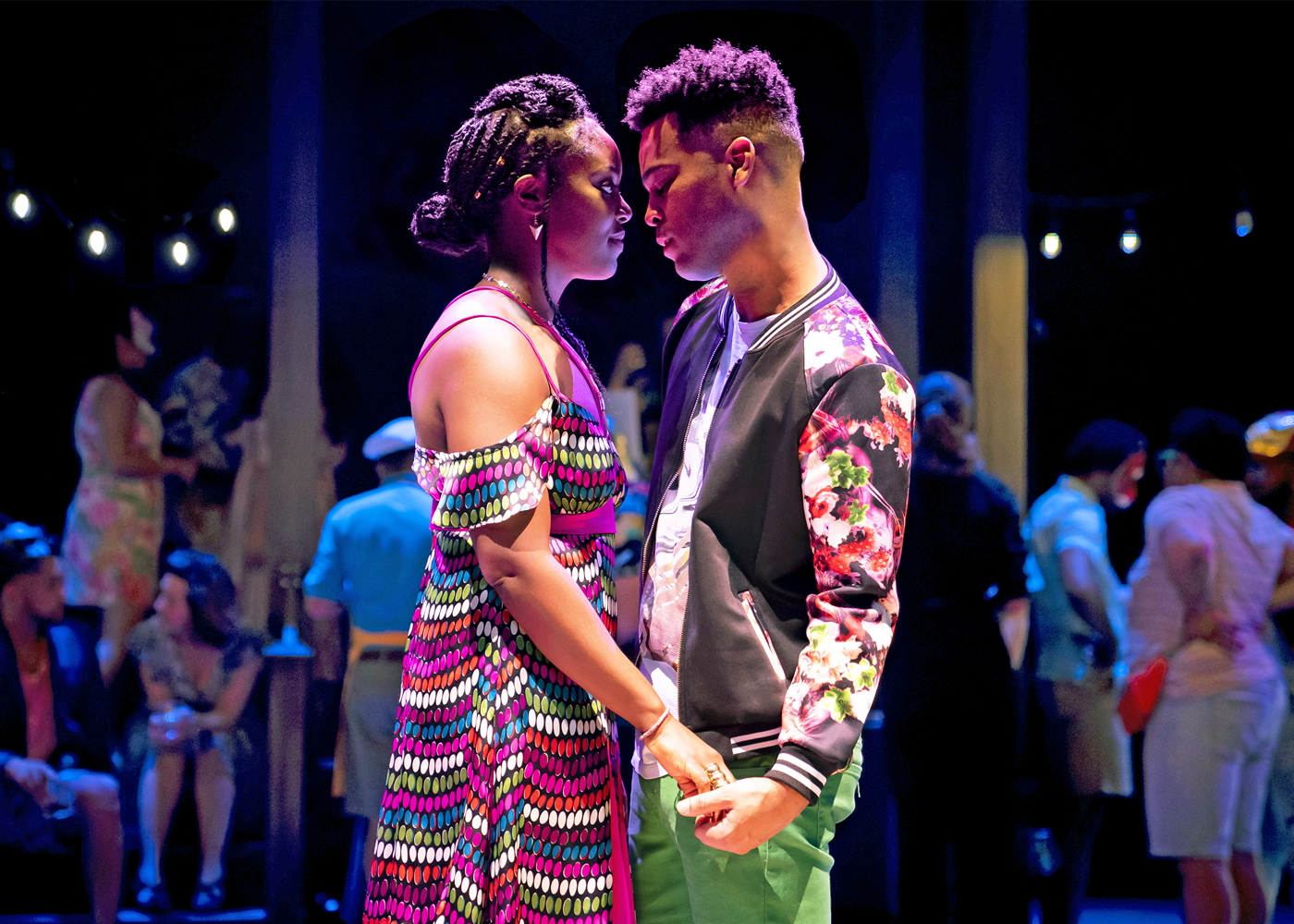 When you are doing a production of Romeo and Juliet, by far Shakespeare’s most beloved play, a great deal of its success hangs on the emotional connection between the two titular characters. If these two have real chemistry, the play will work no matter what else happens. Unfortunately, though, there is no real fire or even a spark between the lovers in Chicago Shakespeare Theatre’s new production, directed by Barbara Gaines.

Set in scenic designer Scott Davis’s graffiti-covered July 2020 Verona, this version of the play seeks to focus on the legacy of hatred that the Bard’s doomed young lovers play against. In a program interview, Gaines says that she sees their story as “a metaphor for the larger pain of a community, uprooted by conflict,” and she is open about connecting that pain to the even larger context of the sharp divisions that rip through today’s world. She doesn’t focus on specific hatreds, choosing not, for example, to divide the Capulets and Montagues along racial lines; rather, she leaves the source of their “ancient grudge” as unknown as it was in Shakespeare’s day: children are dying and no one even really knows why.

It’s a compelling conceit, to be sure, and the palpable anger between the two clans is clear even in a brief introductory segment in which the Montagues interrupt a basketball game among the Capulets. There is no way that the two enemies could ever play on the same court, so Montague (Dale Rivera) instead takes the ball and rolls it far away, opening the door to taunting by Capulet (James Newcomb) that quickly devolves into a manic and brutal knife fight. In the aftermath of this brawl, broken up by riot police, their Chief (Amir Abdullah) orders both families to keep the peace on pain of death, and the plot is set in motion.

Of course, Romeo (Edgar Miguel Sanchez) is not a part of this melee: the young man, pining for the loss of his beloved Rosaline (who has decided to live as a virgin), arrives late to this particular party. Sanchez is solid as the contemplative, mooning lover, establishing his character as something “other” than his friends and family, eschewing violence for lengthy expostulations on the pain of his loss and the nature of love. But when he is paired with Juliet (Brittany Bellizeare), something just doesn’t click.

Like Sanchez, Bellizeare is fine and quite likable on her own, in scenes with her parents or her beloved nurse (Betsy Aidem, who does not quite find either the compassion or the absurdity of the character). She’s still likable after meeting Romeo at her father’s party, but nothing ignites between them, even in the sweet and tender “first kiss” scene. Oh, and really: Avengers masks for Romeo’s crew? Only Mercutio (Nate Burger, who doesn’t really have a chance here to establish his mercurial and comic character, but still is clearly the alpha of this group) could hope to pull that off. (At least Gaines gave the Spiderman mask to Romeo; I love my Spidey, but he is clearly the least intimidating of the Marvel heroes.)

The lack of chemistry continues to be noticeable in the balcony scene (which here is actually just off Capulet’s back porch, which doesn’t look very opulent at all). With her father dozing on a lawn chair in the yard (why?), our teenage heroes offer their hearts to each other too timidly to be believable as young people so desperately in love that they are willing to risk everything—including parental wrath—to have each other. (It doesn’t help them that the scene is significantly edited; a lot of the beauty of the poetry is lost in the cut.)

After their wedding night, Shakespeare’s mostly light-hearted first section turns suddenly dark. When Tybalt (Sam Pearson) kills Mercutio in a knife fight, Romeo’s passion and adrenaline briefly kick in and he kills the Capulet favorite—a scene that is over far too quickly to be believable, especially as Romeo is up against an older, more experienced fighter about whom Mercutio has specifically warned him. This is one of the problems with replacing swords with knives: there is not as much interesting fight choreography you can really do with them, and the scene ends too abruptly. Even Romeo’s shocked and plaintive “I am Fortune’s fool” seems terribly understated.

The second act of the play feels very choppy, which may be due to editing. (The decision to punctuate each scene with flashes of both light—by Aaron Spivey—and sound—by Mikhail Fiksel—might make it seem so more than it is, as this draws attention to the change of scenes instead of sliding fluidly through them.) It also contains a few more odd decisions (Romeo and Juliet consummate their marriage on a large, uncomfortable-looking rock for some reason instead of a bed?) but for the most part plays out as you remember.

A few other minor characters do stand out. Julian Parker makes a great and sympathetic Paris (and gets the evening’s biggest laugh with a small bit as he exits one scene). Darlene Hope has a few really good moments as the Friar, especially her reaction to the family keening over Juliet’s “corpse.” Both mothers—Lia D. Mortenson and Brianna Buckley—are strong, especially in their more emotional scenes, as are the fathers, especially Newcomb’s Capulet.

However, it is the star-crossed lovers themselves who ultimately determine the strength of this play, and even though both of them are fine actors with several excellent moments here, they just never seem to be a real couple. They also don’t feel young enough to be thoughtlessly swept away by the tumult of their parents’ hate. Perhaps Gaines would have been better off to cast actual teenagers, a la Franco Zefferelli in his 1968 film; the fervent and explosive nature of first love is best embodied in adolescents, as Shakespeare clearly understood when he made them that age to begin with. Here, though the production quality is certainly up to Chicago Shakespeare Theatre standards and though there are fine performances throughout, if not for two strong, powerful codas that Gaines adds this would have been much ado about very little.

Romeo and Juliet is now playing at the Chicago Shakespeare Theatre, Navy Pier, Chicago, IL, until Dec 22. The show runs 2.5 hours with one intermission. Check the website for specific dates, times, and tickets. Find more information about current plays in our front page recs and at theatreinchicago.com.