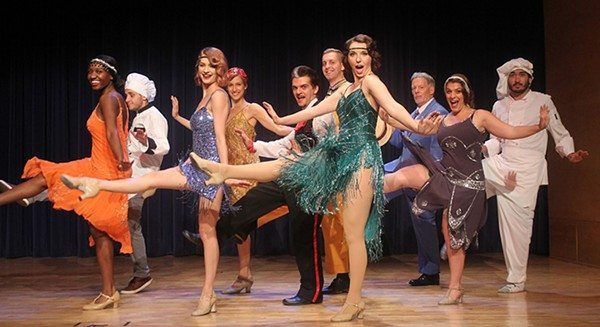 “The Drowsy Chaperone” has always been a contradiction: a rousing satire of a musical comedy within the frame of a monologue by a theatre fan whose loneliness is such that he can only be truly alive while dreaming about his musicals. Skokie Theatre’s MadKap Productions hits both levels of this Tony Award-winning show superbly, and that makes for a joyful evening’s entertainment.

James Spangler is a perfectly cast Man in Chair, our narrator and the lonely theatre buff who invites the audience to share with him the soundtrack of his favorite musical, entitled “The Drowsy Chaperone.” That show, of course, plays out in front of us on the cramped Skokie stage that signifies the cramped apartment he lives in, as he “watches” it and relives its glory. Spangler wins the audience over from the start with his charming, personal manner and the Man’s witty reflections on theatre. (“I hate it. Three hours is too much.”) We learn from the opening moments, played out in the dark, to trust him, and that’s why we can go along with his memory game.

The play-within-a-play is a laugh riot and doesn’t take itself seriously even for a minute. Like most good musicals, it centers on a wedding, this time the society wedding of a just-retired “It” Girl Janet Van de Graff (Rachel Whyte) and an upper-class scion, Robert Martin (Christopher Johnson). Early on, we see easily that they are made for each other (and simultaneously establish the considerable singing, dancing and acting chops of Johnson and Whyte, each of whom gets a later tour de force number to stir up the audience and show off their skills.)

Whyte’s, appropriately called “Show Off,” is about the fact that Janet has decided to retire and not “show off” anymore.

Johnson’s show-off number is a duet tap dance (with Robert’s best man, played by Joe Lewis) brilliantly illustrating the groom’s “Cold Feet.” There is nothing cold about either man’s feet, and that irony isn’t lost on the audience as the duo sizzle on the stage.

The titular star of the show, the “drowsy chaperone,” is the lethargic, drunken, apathetic woman in charge of keeping Janet away from her groom-to-be the day of the wedding. (Bad luck, you know, and all that.) Her world-weary emotional baggage, which doesn’t prevent her from enjoying a fortunate sexual encounter when it literally drops into her lap, pretty much explodes in each of her songs, and we can hear the echo of the Man in Chair’s thoughts as he spends his empty days.

It’s a dismal little world in which we live. It can more you till you’ve nothing left to give. Seven overrated wonders, seven underwhelming seas, six excruciating continents…Antarctica? Oh, please!

Though she says she believes there will still be a song to sing in the end, for her it comes “as we stumble, bumble, fumble, plumble, as we stumble along.” Not so very uplifting, but then this character seems most directly attached to the psyche of the Man, both of them drinking throughout the play, both seriously disinterested in the outside world.

The chaperone is allowed a happy ending, and one feels that this is what the Man in Chair (and perhaps this is a decent time to mention the completely impersonal nature of that name?) desires from his life but can’t find. At the end of the play, though all of the characters are onstage dancing (no mean feat for a 20-person show on this small stage—can we get a “huzzah!” for choreographer Julie Salk?) the Man has no real person he can talk with. He spends the whole play refusing to answer and eventually hiding his telephone. Even when he meets a building super who shares his passion for musicals, he can’t establish a connection, growing irritated instead of friendly. So all that the Man can do is find his harmony in his musical, and director Stephen M. Genovese’s final scene gives him the best “happy ending” he can truly hope for.

There are so many other wonderful supporting performances in this play that it would take a much longer review to call them all out, but I’d especially like to mention Debby Shellard, who plays the woman who owns the mansion in which the wedding is to take place. She is wonderful, a delight to watch, and her relationship with her “underling” (Mark Anderson) is a continuing highlight. In addition, the Tall Brothers (a couple of gangsters played by Zeke Dolezalek and George Hernandez ) and a stereotypical Hollywood producer and his girlfriend (Bob Sanders and Abby Boegh) provide more than their fair share of comic relief.

Even if the Man in Chair, for all of the laughter he creates during the show, may not be the most happy fella, he is wicked fun company for a little night music in a Chicago theatre, even if that theatre is in Skokie.

There are only three performances of The Drowsy Chaperone remaining, as it closes on Oct. 7. Tickets ($29-39) are available at skokietheatre.org.