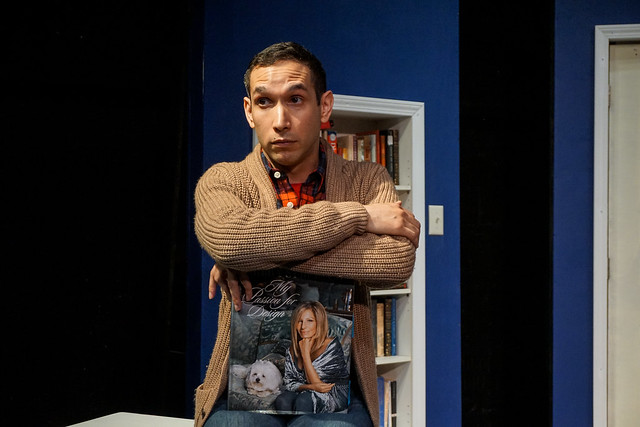 Most people store things in their basements. These subterranean spaces tend to fill up with the detritus of our lives as we live them. Sometimes we keep our most precious memories on shelves or in display cases, but a lot of the time they just wind up in boxes. Barbra Streisand is different. As the star made public in her book My Passion For Design, Streisand—owner of a whole lot of high-quality memorabilia—actually set up a faux shopping mall in her basement to display her stuff in “stores” like a doll shop and a clothing shop and a gift shop, etc. In 2013, playwright Jonathan Tollins imagined what it would be like to work in such a place. Someone, after all, must keep it clean and perhaps help Streisand when she wants to come down to see or use her things. The result was the one-man show Buyer and Cellar, which is now playing at Pride Films and Plays.

Scott Gryder plays Alex More, an out of work actor who is hired by Streisand to be the lone employee of the mall. Gryder, a personable and engaging performer, plays Alex along with other characters including his boyfriend Barry, Streisand, and Streisand’s majordomo, Alice. These portrayals are signified by physical stance and voice changes; though Alex tells us from the start that he doesn’t even try to impersonate Streisand, he does a great job with accent and vocal inflections. Whether he is giddy with the memory of this unusual job, arguing with Barry about Streisand’s intentions, engaging in clipped conversations with Alice, or conversing with the diva herself, Gryder conveys Alex’s joys and confusions about his life brilliantly. But he comes most alive when Alex is talking with Streisand and playing the salesman in her stores while she plays the “customer.”

It’s difficult to imagine what you’d feel like in such surreal moments, but Alex is ebullient, clearly having the time of his life improvising with such a person. Director Donterrio Johnson has Gryder use every square inch of the set, bouncing all over the place, perching on whatever is available, dancing a coat rack around the room. And it is necessary to do so: there is not much plot in this play, so it is utterly dependent on the actor playing Alex to hold the audience visually. Both Johnson and Gryder seem completely aware of this and (though the play does start to feel repetitive just before its final sequence begins, much like Alex’s days), Gryder’s high-energy approach to his character(s) holds our interest. He’s so easy to like that, even when the play slows down, he’s fun to spend time with.

That set, designed by Evan Frank with nice lighting by Mike McShane, is a worthy playground for Johnson and Gryder. They clearly define spaces early in the show—here is where he talks with Barry, here is where the storefront is, etc.—but they certainly don’t confine Gryder to these small parts of the stage, allowing him access to the whole as soon as something is established, allowing plenty of opportunity for movement and the creation of interesting stage pictures.

This is a very funny, clever and original play, and Tollins’ script is very witty. His imagined scenes with Streisand in her mall are wonderful; it’s a joy to watch this mega-celebrity essentially playing improv games with an employee who is not quite hiding the fact that he adores her. These scenes may be, as the script is careful to mention several times, fiction, but somehow they just seem right under these circumstances. Anyone who would build herself a mall in the basement would certainly enjoy playing around in it. Far from distancing us from the diva, her mall ends up making her more human. A human with a ton of money to create fantasies for herself, but human nonetheless. When she complains that most of the people in her life want something from her, we hear that and feel for her to the point that, when the fantasy breaks down, she will be genuinely hurt. And of course Alex is caught up in that fantasy as well. It influences his real life relationship with his boyfriend, but there comes a time when fantasy is not enough, and Gryder is genuine and sweet in the closing scenes.

Buyer and Cellar is a treat, both as a window into a very strange world and a comic tour de force for Gryder, whose skills and joy of performance are perfect for Tollins’ journey. Get out to see it; you won’t be disappointed.

Buyer and Cellar is now playing at Pride Films and Plays, 4139 N Broadway, Chicago, through May 19. Check the website for specific dates, times, and tickets. Find more information about current plays in our front page recs and at theatreinchicago.com.