In a theatrical world overflowing every year with what seem like hundreds of varying takes on Charles Dickens’ classic A Christmas Carol, perhaps the first question one must ask upon hearing that Citadel Theatre commissioned a brand new one to add to the pile is, “Why?” But then you hear that it’s a musical and that the playwright/composer, Douglas Post, was responsible for a very popular adaptation of The Wind in the Willows, and finally that it bears the Harry Potter-esque title Scrooge and the Ghostly Spirits, and you admit your curiosity is piqued. You’re even a bit excited to see what Lake Forest’s Scott Phelps, Citadel’s Artistic Director and the director of this play, has come up with. And although there are some kinks in the fabric, what you find is a very entertaining evening spent in the company of some very enthusiastic actors.

Adapting A Christmas Carol is a tricky business. On the one hand, you have one of the most perfect pieces of fiction ever written, so it is very difficult to mess up. On the other, it is so well-known that many audience members can probably recite the lines along with the characters; in such cases, it is incumbent upon actors and directors to focus on doing whatever they can to make the play their own. Here, of course, the musical structure immediately sets the play apart. And there are many times, as in the haunting “The Sun Will Rise,” sung by the devastated Mrs. Cratchit (Monica Szaflik, channeling her character’s pain into knitting in order to focus on something), the contemplative “Walk With Me,” sung by the angelic Catherine Athenson in a costume that all by itself earned Paul Kim’s salary), Scrooge’s plaintive “Lonely Boy” about his grade school self, or the buoyant “Cornucopia,” sung by the Ghost of Christmas Present (a brilliant and dynamic Rebecca Keeshin), when the songs take moments of the familiar script to heights they have rarely reached in other productions.

There are also times, though, when they simply get in the way. We don’t need an original song at Fezziwig’s party, for example. It’s a Christmas party: sing and dance with Christmas songs. But the most egregious examples come early in the play because they hurt moods that must be carefully nurtured in order for any adaptation of this story to work. Scrooge (Frank Farrell), for example, must be established as mean and miserly from the beginning in order to give him room to change. But how do you do that when he stops to break into song? And then there is the odd case of what might be the most heartfelt song in the show, “Mankind Is My Business.” According to Post, it was this song that provided an entry point for him to the entire musical and you can see why: the musical acclamation of Jacob Marley’s admonition to Scrooge is indeed a powerful ballad, and as sung by Eric Dohner, enough to bring down the house. So why call it a problem? Simple: Marley’s ghost is supposed to be terrifying. Its entire point is to frighten Scrooge into paying attention to the “lessons to be learned” from the three spirits. And here he starts out that way, but then he sings a power ballad. Jacob Marley as Michael Bolton. It’s so impossible to come back to scary from that that director Phelps doesn’t even try; he just lets Marley mumble his final words to Scrooge sadly and slink off the stage through an invisible “wall.” You see the problem I was having. (I have an issue with Scrooge’s reprise of the song too: again, its tone is all wrong for the play’s ending.)

While I am noting problems, I ought to mention Phelps’s decision to continually cram his entire eighteen person cast onto the theatre’s small stage, made 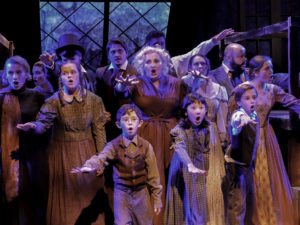 smaller by Kristen Martino’s excellent set comprising levels created from natural-stained wood. (A brilliant leaning window with a London mural looms over the band upstage, created I assume by scenic artist Sandie Bacon.) There were a few times (Fezziwig’s party comes to mind) when these numbers onstage were very useful, but mostly it just seemed crowded. If the cast was needed, why not use the aisles? Lighting designer Diane D. Fairchild placed streetlamps over the audience in an effort to draw us into the scene; characters occasionally scattered among us would have done a nice job of this as well and left the stage far less cramped.

Such problems, though, didn’t extend to the performances. Farrell’s Scrooge may be more sad than nasty at the start, but once the ghosts start coming he is every bit the man we expect him to be. His heartrending plea for the Ghost of Christmas Present to take him home is a small highlight; he simply cannot take this any longer. Other standout performances included the talking ghosts, as both Athenson and Keeshin made their characters memorable in very different ways: Athenson with the slow, methodical presence of a visiting goddess, Keeshin with the more exuberant joy of someone who carries around a Horn of Plenty. (Her wonderful touches of sarcasm and flashes of anger make the character truly powerful.) Nephew Fred, the ever-happy offspring of Scrooge’s dead sister Fran, is another character who comes alive in this production as Preston O’ffill finds every possible nuance of Christmas Spirit one can find. And in an opposite performance, Natalie Santoro’s Belle is so real that you find yourself hoping against hope that Eric Deutz’s Young Scrooge will see the error of his ways and hold onto her. A moment later on when, married to his former friend Dick Wilkins (Matthew Philip Johnston), she finds out that he is alone in the world and allows all of her character’s former feelings for him to cross her face before settling back into her marriage is simply wonderful.

In all, I’m not convinced that the world needed another version of A Christmas Carol, but this one is still a worthy addition to the mix and well worth the trip to Lake Forest to see.

Scrooge and the Ghostly Spirits is now playing at The Citadel Theatre, 300 S. Waukegan Rd, Lake Forest, until December 23. Performance dates and times vary; check website. Tickets are $40 and are available from The Citadel Theatre. Find more information about current plays on our Current Shows page and at theatreinchicago.com.