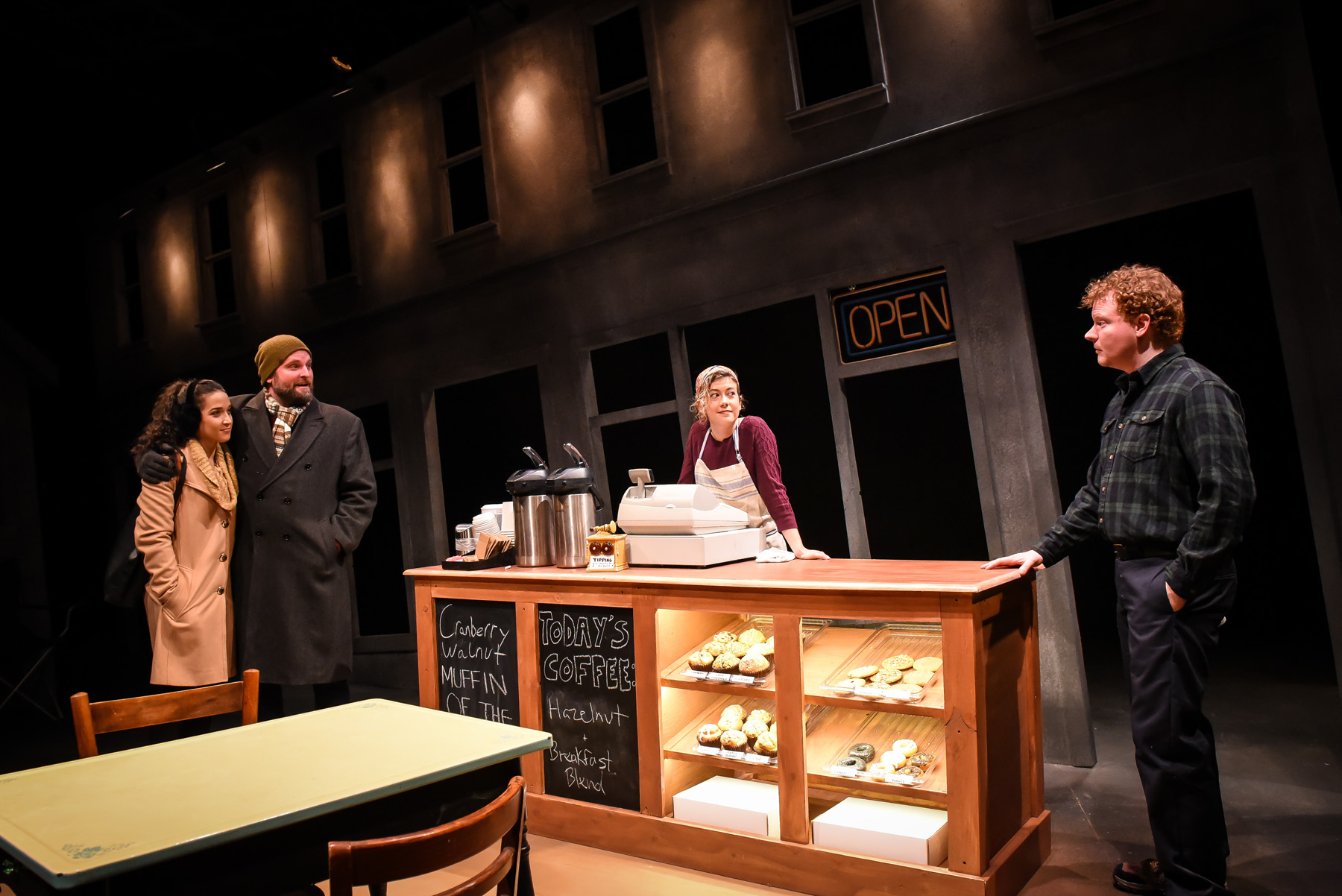 Step into the Theatre Wit stage housing Shattered Globe’s production of Five Mile Lake by Rachel Bonds and you instantly know something is not normal. For one thing, the buildings in Jeffrey D. Kmiec’s set are not squared, especially the large downtown building housing the central bakery location, which is all askew: left and right sides not matching at all and stage left wall leaning significantly. For another, both this building and the house across the set are empty; they are clearly shells, all darkness inside. (In fact, we can see through the bakery building: there is nothing there.) And then there is the fact that the bakery is located outside of the building containing it, its squared angles running oddly counter to the building itself. Put this together with the nearly complete lack of color on the set (other than the bakery) and it becomes quickly clear that something is wrong here. What is wrong turns out to be the lives of the five characters of the play, people who have lived enough life not to qualify as “young” anymore but who, through their own decisions and non-decisions, have arrived at this juncture unfulfilled. Director Codie Estle works their interrelationships like a maestro conducting a quiet, sad symphony, paying particular attention to how each movement allows us to uncover more information about who these characters are. And like that quiet symphony, Bonds’ play is not full of sound and fury, yet somehow in its near-emptiness it is something beautiful. 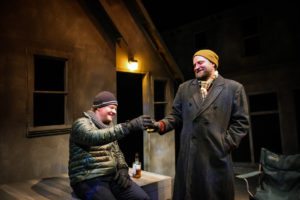 Bonds focuses on Jamie (Steve Peebles), the younger of two brothers who grew up in this small town of Five Mile Lake, Pennsylvania. Unlike his intellectual older brother Rufus (Joseph Weins), Jamie never left home. Instead he has spent his life managing the town bakery, helping his mother, and rehabbing an old lake house his grandfather left the brothers when he died. At the bakery, he works side by side with an old high school classmate, Mary (Daniela Colucci), whom he clearly has a crush on but can’t bring himself to take the risk of asking her out. Instead he teases her daily with small talk about Olympic hockey, which he knows she is not at all interested in. The two of them also care for neighborhood stray cats, with Mary making sure they are fed in the arctic cold temperatures. 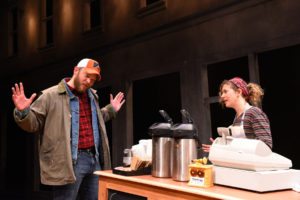 Mary has also taken in another stray: her veteran older brother, Danny (Drew Schad), home after two tours in Afghanistan, suffering from PTSD, and unable to find a job. Having given him a home, she feels responsible for him: as much as she would like her life back, she knows she won’t have it as long as he remains unemployed and occupying its center. Like the Laura Linney character in Love Actually, she has essentially put her own life on hold to tend to her brother. There is even a scene, very reflective of that film, in which the brother loses his temper and tries to hit her. Neither character, though, is capable of turning her back on her flesh and blood.

Into this mix comes Rufus, home for a visit with his British girlfriend Peta (Aila Peck.) Though at first he says that the trip is a simple visit to see family and the lake, it doesn’t take long (a late night and a bottle of Jim Beam) for the truth to become known: he and Peta are having difficulties and he hopes the visit will help fix things. The alcohol also leads him to accuse his brother of wasting his life: why is he spending all of his time fixing up this old house? Why is he still living in this tiny town? (Rufus proclaims that he can’t believe he spent eighteen years here himself.) And, most of all, why has he not yet made any kind of move on Mary, whom he so obviously likes and whom Rufus himself used to watch running in high school with fascination, going so far as to make frequent drive-bys of this “mystical night creature” on her midnight runs. But Rufus himself is not as successful as he claims to his younger brother; his dissertation has stalled and he lacks all motivation to continue his academic work: the genius is finding less fulfillment in the world of the intellect than he had hoped. 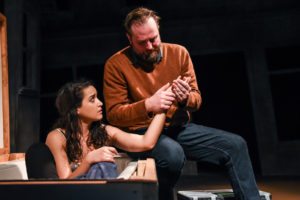 Peta too is feeling unfulfilled, though she is easily the most successful of the group, an assistant editor in a publishing company. Still, she feels it’s a glorified secretary’s position sometimes and not what she is capable of doing. And then there is her relationship with Rufus, a man her parents detest and feel is beneath her, a man who drinks too much, a man who seems to idolize an initial vision of her more than the real thing, constantly speaking of how beautiful she is rather than what an incredible woman she is. Like all of the rest of them, Peta is stuck in neutral.

Five Mile Lake sets up these complicated personal and interpersonal dynamics against the backdrop of a frigid patch of weather in this small town, the weather reflective of the frozen patterns of their lives. It’s telling that all four of the main characters choose at some point to spend some time outside in the biting cold, as if challenging it to do its worst…or trying to break free of the doldrums of their lives with a jolt of the arctic air, not that that alone will ever be enough. 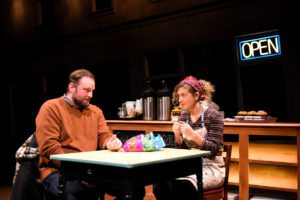 Unfulfilled dreams loom large in this play. Both brothers appear to pine for the “mystical nighttime creature,” Mary, and both wish for lives they are not currently leading though neither actually knows what would be any better. Peta desires her man to act more like her man, or maybe a change of man entirely. Mary wishes that she had stayed with her own academic life instead of returning to Five Mile Lake and ending up stuck working at the bakery and taking care of her brother. Danny just wants a job so he can be self-sufficient again but his past in the war haunts him. Like the stray cats stuck out in the cold, each of the people here is in need of someone to help them get through this hard spot in their lives.

The acting here is superb. Peebles is a perfect Everyman as Jamie, the sweet soul who works hard, is faithful to his family, and wants the girl, but has no idea how to get her. He is gentle and friendly for most of the play, but it’s when the script allows him to be sarcastic or angry that he shows what he’s made of: those emotions, filtered through Jamie’s overall demeanor, are difficult to play, yet Peebles does so without missing a beat. Weins maintains a studied distance as the intellectual Rufus (and can we take a moment to mention the irony of naming the intellectual member of the family “Rufus”?) and is just smarmy enough when hitting on Mary that we aren’t completely sure he’s doing so. As Mary, Colucci is outstanding: Mary’s desire to care for the cats and her brother having replaced her personal goals, she has to show us she is hurting inside while maintaining a calm exterior. Colucci manages this brilliantly, and a final scene allows her to reveal the pain she’s been feeling all along. Schad has a great scene as Danny, playing the damaged soldier’s emotional swings broadly and with more energy than the rest of the cast combined: he is the one whose damage is surface-level, who shows it. He’s the loudest, quickest movement in the symphony. 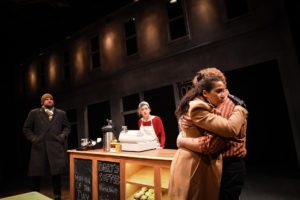 Peck is remarkable as Peta. At first appearing to be an afterthought of a character—the British girlfriend at the big brother’s side—Peta turns out to be far more important than that. In many ways, she brings about the major changes in Jamie far more than his confrontation with drunken Rufus ever could have. (There is a moment when you’d swear he would have made a better boyfriend for her than Rufus, though he has even less in common with her.) Peck portrays Peta’s vulnerability as well as the strength in her that initially drew Rufus to her. Like the rest, Peta is still searching for something. When she throws herself into a goodbye hug at the end, Peck allowing the hug to go on just a little too long, it is clear that she is sure she has made a real connection, something she has not been able to do with Jamie’s brother.

Bonds’ script is masterful in juggling moments of small talk and intimate conversation and weaving them together to ultimately allow a conclusion that, while certainly not a happy one, feels justified. There is nothing huge going on here. There will be no massive epiphanies, no outsized moments that catalyze everything that follows. (Well, there is one, but it too feels more like a character seeking a jolt to open a door in life than anything else.) Estle keeps this quiet symphony on a very even keel: all of the movements are small and gentle. No bombastic timpani here, just mellow strings and maybe an oboe…and some horns when Danny comes in. It’s life as it is lived: even the bigger moments often aren’t all that big.

In addition to Kmiec’s set, the lighting design by J.R. Lederle and sound design by Christoper Kriz (which includes original music) are very effective in setting tone and atmosphere. Hayley Rakowiecki’s costumes are perfect for these people bundled up against the chill, and the props by Vivian Knouse are exactly right: I wanted to raid that bakery case the second I walked into the theatre because everything looked so wonderful.

In the end, everyone agrees that it would be nice to come back in the summer, and you have to believe that the severity of the winter setting didn’t help the moments in the play. However, there is a distinct feeling that these five people will never again be together in Five Mile Lake. Life moves on when the symphony is over, and the various instruments become individual again. Some lives will change for the better as a result of all of this, some for the worse. That is how things work. And Five Mile Lake is a poignant representation of the way life works, with all of its warmth and chill. You may not come out of the theatre a changed person, but you’ll know you saw something real and honest. Sometimes real and honest is the best that life can hope to be.

Five Mile Lake is now playing at Theatre Wit, 1229 W. Belmont in Chicago, presented by Shattered Globe Theatre, until February 24. Th-Sat 8 PM; Sundays 3 PM. Tickets are $15-35 and are available from Theatre Wit. No half-price tickets are available. Find more information about current plays on our Current Shows page and at theatreinchicago.com.