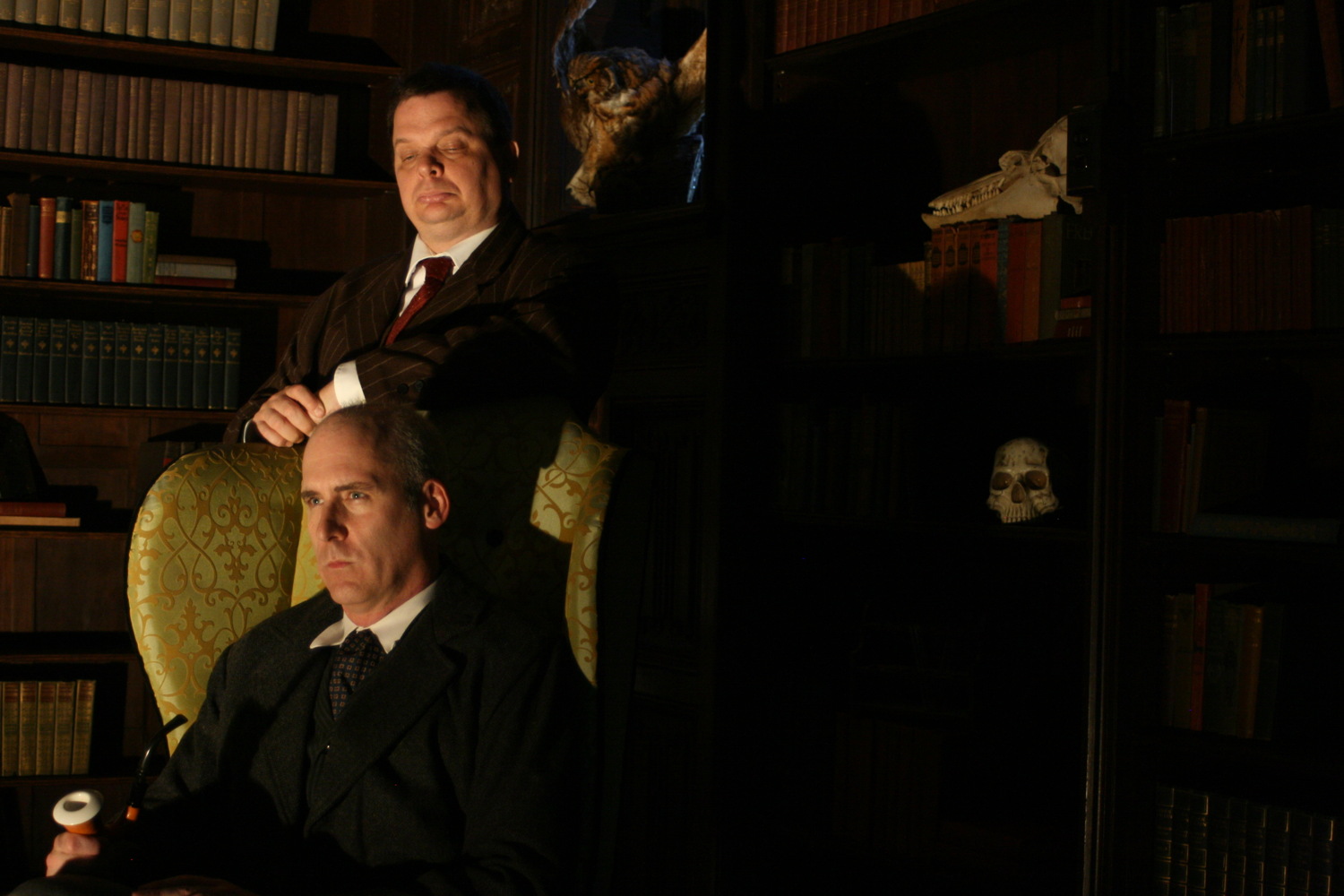 Every once in awhile, you see a play you really want to like but, for whatever reason(s), it doesn’t float your boat. Such is the case for me with Sherlock’s Last Case, now playing at First Folio Theatre. It isn’t a bad play: it is often entertaining; however, Charles Marowitz’s bantamweight and inconsistent script doesn’t really offer much to the genre of British detective mysteries that it strives to join.

Since it is a First Folio production, it has the expected strong design elements including a malleable set by Angela Weber Miller adorned with dozens of fun props by Wendy A. Huber and Margaret Garofalo (really nice work here), excellent lighting by Diane Fairchild, and original music and sound design by Christopher Kriz. And director Janice L. Blixt and her cast clearly enjoy themselves, but it is not really enough to overcome a less than artful plot that manages to pose several interesting puzzles and twists but isn’t up to the task of resolving them satisfactorily (which any fan of Holmes knows is, um, elementary).

The “last case” is set in motion by a letter signed by the hitherto unknown son of Holmes’ arch-nemesis Professor Moriarty in which the scion vows revenge for the “murder” of his father. Holmes (Kevin McKillip) and Watson (Joe Foust) are thus thrust into an intrigue that is a personal attack on 221B Baker St.

Because of the nature of the surprises in the play, it is difficult to say much more about its plot except that Sherlock himself would have had all sorts of issues with Marowitz’s central twists, which don’t really stand up to any kind of scrutiny. Still, they are fun, and at least one of them is enough of a shock that I’d wager very few, if any, in the audience saw it coming.

Marowitz’s Holmes leans heavily into the character’s unlikable nature, to the point where you kind of hope young Moriarty succeeds. His penchant for unnecessary barbs and uncontrollable outbursts shows what a caustic, misanthropic person he has become. McKillip dives into this interpretation, treating us to a Holmes who gets along with no one and who simply doesn’t care about it. His treatment of the affable Mrs. Hudson (Belinda Bremner, who absolutely steals several scenes) all by itself would disqualify him from our sympathies, but his arrogant and self-satisfied nature doesn’t allow him to see his shortcomings.

As Watson, Foust has a few more dimensions to play with, as this version of the venerable doctor offers a lot more variety than the character usually gets to show, and Foust is able to have fun showing sides of “Holmes’ aide-de-camp” that we don’t get to see in most of these mysteries. In addition, René Ruelas plays an exasperated Lestrade (is there any other kind?) and Lydia Hiller is outstanding as a young woman who seeks Sherlock for help, adding fuel to the mystery’s fires.

Even the ending of the play doesn’t quite work: pretty much no one in my audience thought that this little moment had successfully brought the play to a conclusion, leading to an awkwardly delayed ovation. Some plays, of course, have enigmatic endings that intentionally leave things in the air and result in the same issue, but that’s not the case here. The play just sort of ended, as if Marowitz just ran out of steam. As always, YMMV, but for me this is a well-produced but fairly slight play and one of First Folio’s lesser achievements.