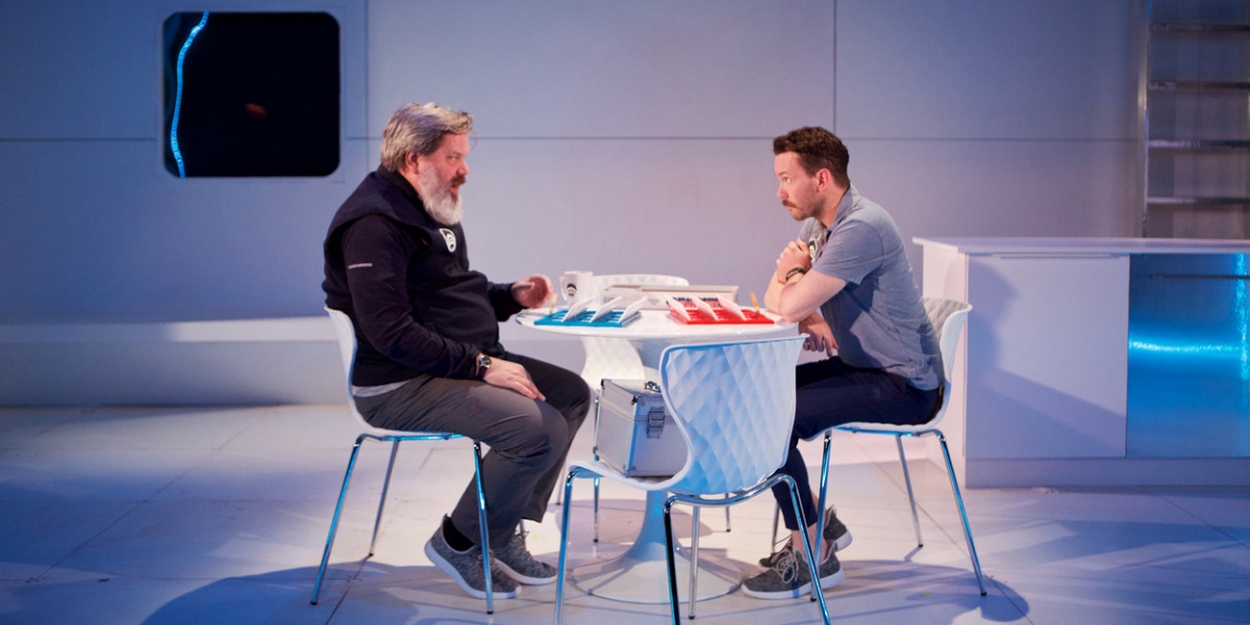 There is so much going on in Alistair McDowall’s psychological space thriller X that it’s hard to know where to begin, and the nature of the play morphs so much during its two-hour duration that it is often difficult to know what is real and what is not. Of course, this is precisely by design: from the moment you walk into the theatre, McDowall owns you, and by the time you realize this you are caught in his ever-evolving web. Like his space scientists trapped on Pluto (once called Planet X), you are never quite sure what is happening, what is coming, or how to process what you are seeing.

The basic premise of this play is that we are watching a small scientific outpost at the far reaches of the Solar System sometime in the future when the Earth is all but used up. All of the animals have died off, as have all of the trees. (The Last Tree is worshiped by a religious sect.) Oceans have risen; continents and countries have been devoured. Even the sun is losing its energy. With little left at home to remain for, the world’s population—crammed together on what land remains unsubmerged—seeks a new foothold in space. There are American outposts on Mars, Europa, and other inner Solar System locations, leaving this one outrageously distant one for the British. (Where the other nationalities might be is not discussed.)

The current group of scientists/astronauts manning this facility have, as the curtain goes up, been waiting a lot longer than they should have for a shuttle back home that is already three weeks late with no communication at all. They send out messages, their instruments tell them that the messages have arrived at their destinations, but there is nothing in response. Thus begins what may well be an endless battle with sanity and loneliness as they wait for a space rescue that may never arrive, all of which is made far worse by the discovery that the one thing they believed they could count on—time—has gone all wonky.

From before the beginning of the play, we have seen the large digital clock on the station’s wall as it kept track of Earth Standard Time, the only way these people immersed in the Plutonian darkness can realistically remain aware of days and weeks passing. When one of the scientists accidentally discovers that the clock is no longer reliable, it’s as if the world has caved in. Suddenly they don’t know how long they have truly been there or how late the shuttle actually is. With food, air and power enough for a decade and recycled water to keep them hydrated, there is simply no way to know how long their eighteen-month mission has already lasted, and they begin, one by one, losing their hold on reality.

McDowall plays every card he has in his deck here. There are apparent hallucinations—or is someone actually out there? There are suicide attempts (complete with blood spraying Yu Shibagaki’s pristine white set). As the days—weeks? months? years?—go by, even chronological time itself falls apart in their minds, and McDowall presents us with recursive scenes and bizarrely absurdist conversations as if we have wandered into Waiting For Godot—which perhaps we have. All we know for certain is that, just like the astronauts we are watching, we simply cannot trust what we see.

Director Jonathan L. Green and these actors certainly must have had a grand time exploring this play as they rehearsed it, discussing all of the wormholes down which the author has made them travel and wondering which version of reality is…um…real. Exploring character in a play with this kind of structure is like working out a puzzle in which you know that key pieces are missing, but the cast manages to create indelible personalities with a lot of depth.

Sarah Price is outstanding as shy scientist turned unwilling leader Gilda, who must somehow navigate this situation without losing her mind and manage at the same time to help the others on the station, who include H. B. Ward, Krystal Ortiz, Natalie Ortega, and Nate Wheldon, all of whom have moments to shine in the play’s focus. But it’s Gage Wallace who has the most growth as Clark, at first a lazy and unlikable character who annoys his fellow astronauts in any way he can (including bouncing a ball against the wall while they try to work). Clark, like Gilda, has to stretch far beyond his initial shortcomings and ultimately become someone who is capable of handling the emotional and mental struggle of their situation if he wants to have a chance to survive.

Tech is also all-important here (as befits a show set in outer space). Michael Huey’s music and sound design is almost a seventh character, as are the lighting and projections (designed by Jordan Kardasz and Paul Deziel, respectively). Director Green coordinates all of these separate elements brilliantly and finds inventive ways of showing the creeping insanity of his isolated characters through staging.

This is one of those plays that require a lot of post-show processing, as it raises all sorts of issues to discuss. Bring someone along to share thoughts with over a drink; you won’t run out of conversation.

X is a Sideshow Theatre production now playing at Victory Gardens Theatre, 2433 N. Lincoln, Chicago, through Oct 27. Check the website for specific dates, times, and tickets. Find more information about current plays in our front page recs and at theatreinchicago.com.