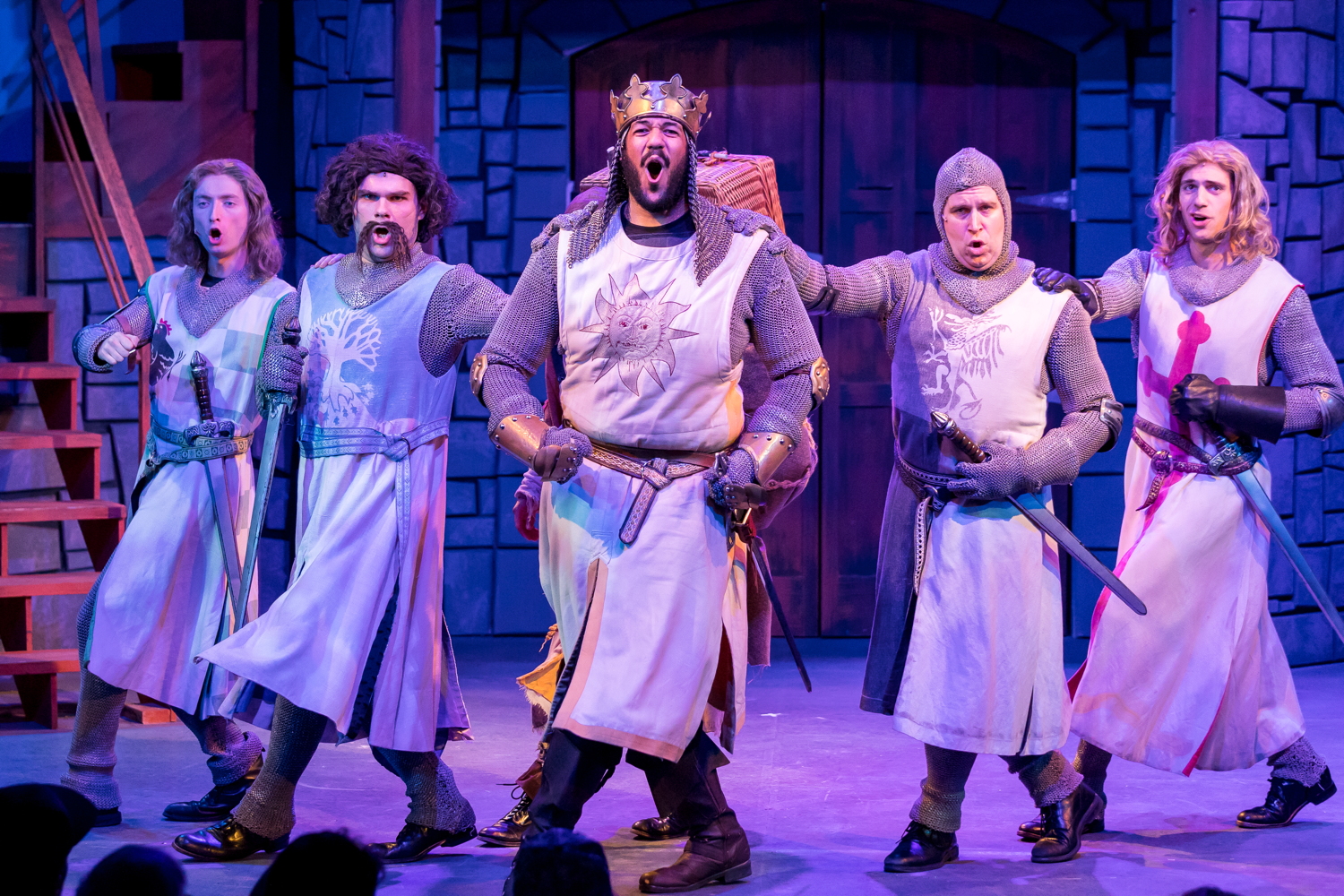 The zany sketches that comprised the 70s hit series Monty Python’s Flying Circus, as well as the movies that it spawned, provided some of the most hilarious moments of my young life, as they did for millions of other fans. So Eric Idle and the Pythons had a built-in audience when they created Monty Python’s Spamalot, a hugely successful property that went on to win the Best Musical Tony Award. Based on their 1975 film Monty Python and the Holy Grail, the musical itself is a series of fanciful and highly irreverent sketches and broadly comic songs purporting to tell the tale of King Arthur’s search for the titular drinking vessel along with his Knights of the Round Table.

It is easy to tell the real Python fans in the audience while watching this send-up of the movie, as they chortle with recognition at the silly scenes featuring prancing around on “horseback” (the clip-clop sound provided by banging coconut halves together), confronting flatulent Frenchmen who taunt the British party uproariously, fighting off a killer rabbit protecting a clue to the grail’s whereabouts, and other memorable moments. But it’s just as easy to see the people who might be discovering all of this for the first time as they laugh out loud at the bizarrely hilarious antics on stage. (I imagine that many of these newbies go home and immediately check out the original series and films online, viewing such classic bits as the Ministry of Silly Walks and the Dead Parrot Sketch with the same how did I manage to miss this before? enjoyment that they had in the theatre.)

The inspired lunacy that is this musical pretty much defies anyone not to have a good time. Under the direction of the very capable L. Walter Stearns, whose sense of the whimsical is perfect for this show, Mercury Theatre’s production features an ensemble that is having so much fun it ought to be illegal. Whether paying homage to the classic Python bits (The Knights Who Say Ni!), singing increasingly funny songs (by its third appearance, “The Song That Goes Like This”—which allegedly occurs “once in every show”—is just downright silly), or dancing Shana Vanderwerker’s fun choreography, this fine group of performers lights up the stage every moment.

The night I saw the show, deep-voiced Steve Peebles appeared in the lead role of King Arthur, filling in for Jonah D. Winston and sporting a full-face smile for most of the play; his Arthur is a King who simply loves being one, even if at times it gets complicated. The wonderful Meghan Murphy has a diva turn as the Lady of the Lake and brings the house down with her over-the-top performances. Accompanying the King wherever he goes—someone has to clomp those coconuts together—is Greg Foster as Patsy. The Knights of the Round Table are Sir Lancelot (Karl Hamilton, who also derives great pleasure from playing the French taunter as well as the lead Knight of Ni), Sir Galahad (David Sajewich, who has fun as the Black Knight), Sir Bedevere (Daniel Smeriglio) and Sir Robin, a character introduced in the “Holy Grail” film played by Adam Ross Brody. Adam Fane also appears as multiple characters from “Not Dead Fred” to Herbert, a nobleman’s flamboyantly gay son who only wants to sing show tunes. There is also a six-character ensemble that dances and sings (to the accompaniment of Eugene Dizon’s talented orchestra) while playing many different characters in Tim Hatley’s inventive costumes.

Spamalot is one of the most absurd plays ever to hit the Great White Way, and that may well be the source of its appeal. Sometimes you just want to go to the theatre to laugh and have a good time. Mercury Theatre’s version is high-energy, rollicking fun, and it has just been extended to run through Dec. 29, so you have lots of time to see it. Make it a holiday show; it may be a bit coarse at times, but its silliness will leave you smiling (and whistling “Always Look on the Bright Side of Life”) as you go.