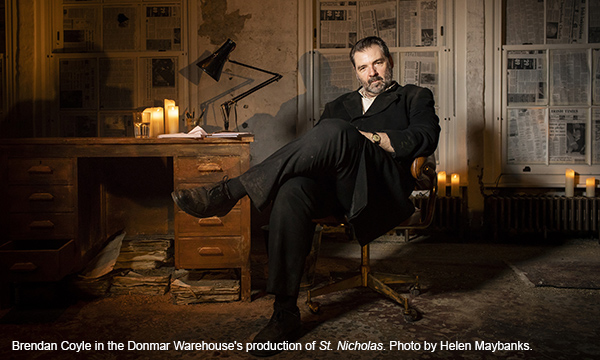 A play about a theatre critic would seem to be right up the alley for a theatre critic, and if one judges from the reaction to the press opening of Conor McPherson’s St. Nicholas at the Goodman, this one certainly is. Brendan Coyle (Mr. Bates on TV’s “Downton Abbey”) plays the critic, a burnt-out, irascible man who has not liked a play in ages and composes his negative reviews while he is watching. He also happens to be the only major critic in Dublin, so he has extraordinary power: a play can live or die on his opinion, yet he claims to take no thought at all in forming these opinions.

It isn’t much of a surprise that he spends most of his life drinking, and on one drunken night he finds himself fascinated by an actress. His infatuation leads him to desire her, and he simply vanishes from his job to follow her and her play to London, where he can drink some more and be even more morose. But something astounding happens in London: he falls in with a group of modern vampires who use their powers to make him want to bring lithe young people to them for feeding. (They don’t kill their victims and don’t turn them into vampires either.) But even the artificial happiness their mind powers create for him isn’t enough to break through the critic’s dark soul: he decides to find his quarry in bars, where he and they drink until late at night and then he leads them to the vampires.

Coyle is absolutely brilliant in the role of the critic. His commanding presence and deep, Irish-tinged voice make for the kind of mind control the vampires have: you are compelled to watch and listen even though this character isn’t much of a human being. He can fascinate simply by walking across the stage, and director Simon Evans takes full advantage of this in a moody, slow-paced production punctuated by small manic actions like Coyle slashing across the stage to fill a glass from a water bucket. And if the first act—the set-up in which we learn of the critic’s life and meeting the actress—might plod a little, the second act, involving the vampires, more than makes up for it.

Coyle presents the critic as a man who is aware of his own self-destructive actions and proclivities and simply doesn’t care. He interacts visibly with the audience, a wink at the character who remains aloof from the shows he is reviewing. In the long monologue, he repeatedly draws us in with a sudden shift of pacing or even a complete stop, forcing us to anticipate where his tale is going. The climax of the play highlights this anticipation, as a vampire mesmerizes the critic with a long tale that ultimately has no real meaning: vampires lack the emotional empathy to need meaning in their lives or their tales, and perhaps this critic is more like them than he is willing to acknowledge.

But although the critic is a detestable person, like the vampires he is fascinating in the same way a train wreck is: you know you are watching something awesomely destructive and you can’t take your eyes off of it. Credit Coyle with a performance that is simply captivating. Credit also the designers, who have made for him a moody stage to play on. Peter McIntosh’s set consists of several newspaper-covered windows and a study that is a chaotic wreck: the perfect metaphors for a broken-down critic. Matt Daws’ lighting is low and dramatic, relying in Act Two on dozens of candles for mood. And Christopher Shutt’s barely there sound design takes us into the mind of a man who is the only important thing in his own life. On this melancholy palette, Evans is able to craft a two-hour character study that, despite its supernatural elements, seems completely grounded. And McPherson’s irresistible script is full of the suggestion of passion and danger that this man’s life has never before held. (The script does add a coda after what ought to have been its final line, but that doesn’t diminish its power.)

Plenty of “Downton Abbey” fans will undoubtedly come to see Mr. Bates, and they will leave knowing they have seen a remarkable and hypnotic performance by the Olivier-winning Coyle and a play that should stick with them for some time. Even if they are not theatre critics.

St. Nicholas is now playing at Goodman Theatre, 170 N. Dearborn, Chicago until Jan 27. Check the website for specific dates, times, and tickets. Find more information about current plays in our front page recs and at theatreinchicago.com.