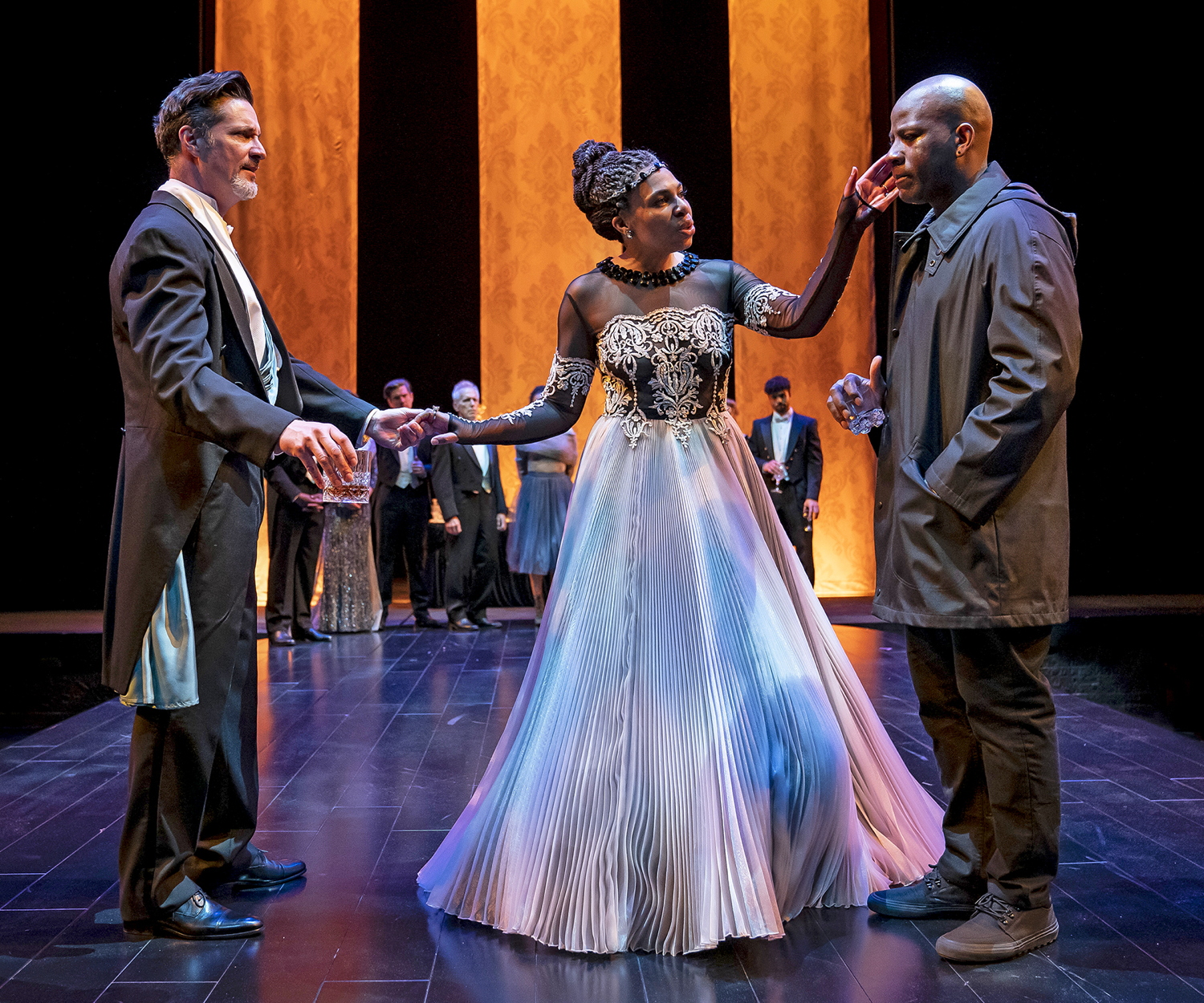 It’s generally acknowledged that there is no greater play in the English language than Shakespeare’s Hamlet, and most of us have seen multiple productions of the play both on the stage and in the movies. There have been numerous well-regarded productions in Chicago alone, including the famous Wisdom Bridge version directed by Robert Falls in which Aidan Quinn, as the Prince of Denmark, spray-painted the line “To be or not to be” on a wall. It’s such a familiar play that directors are always trying to jazz it up with original interpretations and staging. Last year, for example, The Gift Theatre presented a highly contemporized version behind a plexiglass wall that separated the world of the play from the audience.

There are some wonderfully original theatrical touches in Barbara Gaines’ new Hamlet at Chicago Shakespeare Theatre as well, including a projected Ghost of Hamlet’s Father several stories high, a balletic Ophelia death scene, and a lovely intro with Hamlet mourning at his father’s grave. But what most distinguishes this Hamlet is the remarkably gifted cast Gaines has put together to play it, a group that, both individually and together, make these familiar scenes and lines pop as if they are brand new.

Maurice Jones plays the Prince in black jeans and a black sweatshirt, his costuming alone setting him apart from the fancy-dress revelers at the “too hasty” marriage of his mother Gertrude and his uncle, the new King Claudius. Jones is a Hamlet who, as the introduction shows us, is lost in very deep mourning for his father. In fact, until his old friend Horatio (Sean Allan Krill) arrives to tell him of the supernatural appearance of the ghost, he seems content to mope around casting his surly asides at the King and Queen. But the ghost’s appearance reinvigorates him, and Jones infuses his character with a renewed sense of purpose as he begins to seek his vengeance for his father’s murder. Jones is wonderful as Hamlet puts on his “antic disposition,” a pretended madness that allows him to freely haunt the castle while he awaits some proof of the crime. He is especially fun in his verbal jousting with Larry Yando’s Polonius, himself a uniquely comical character played hilariously by the veteran actor, taking advantage of every opportunity to steal an extra laugh. But Yando also manages to make this pompous windbag a sincere, loving father. He may not be right about how he handles things, but this Polonius truly earns the deep affection that leads Ophelia (Rachel Nicks) and Laertes (Paul Deo, Jr.) to feel his loss so movingly. (Nicks’ flower scene is especially moving, and Deo brings on the righteous anger that allows Laertes to go along with Claudius’ nefarious plan.)

As Claudius and Gertrude, Tim Decker and Karen Aldridge have ample opportunity to show us both the infatuation of new love and the unspoken emotions it is hiding. Decker, a down to earth Claudius who would like nothing more than to move on with the business of ruling Denmark, is constantly reminded of his crime by the presence of his nephew/son. And Aldridge is a sympathetic Gertrude, her love for her son blending with her fear for what he is becoming. When Hamlet accosts his mother in her chamber, forcing her to see her marriage from his eyes, Gertrude’s recognition of her own role in bringing him so low seems to break her. And when he kills Polonius—an unprovoked, problematic event on which the plot turns swiftly and suddenly—Aldridge shows us a woman who genuinely does not know what her out of control son might do next.

The rest of the cast is no less perfect. Mike Nussbaum makes a brilliantly comic appearance as the old gravedigger whom Hamlet encounters upon his return from England. Alex Goodrich and Samuel Taylor have fun with the often thankless roles of Rosencrantz and Guildenstern, playing up both their old connections to Hamlet and their current bewilderment about his state of mind. Krill makes a solid Horatio, the true friend the Prince needs. Greg Vinkler gives an artful performance as the Player King who prompts Hamlet’s “Oh what a peasant slave am I” soliloquy. And Kevin Gudahl is a wonderfully foppish Osric.

Gaines’ direction, as one would expect, is inventive and well-paced. She is savvy enough to understand that directing a Shakespearean tragedy is often as much about the little moments (Ophelia and Laertes mouthing Polonius’ oft-given speech along with him, Hamlet “auditioning” various actors to play his uncle in the play-within-a-play, the Wittenberg crew and their goofy fraternity-like greeting, etc.) as it is about the big ones. And her attention to detail makes this a rich and engaging production. From the initial scenes with the ghost to the swordplay brilliantly choreographed by Matt Hawkins, this Hamlet keeps the audience enthralled. Despite our familiarity with the source material, the play is full of delightful little surprises. The set, too, a fairly straightforward Scott Davis design, has a few tricks up its sleeves. So does Robert Wierzel’s lighting, which finds just the right moments to highlight characters in soft pools of light.

Hamlet at Chicago Shakespeare Theatre is not a bold reinvention of a timeless classic, but it is a brilliant, thoughtful, often surprisingly funny, emotional production of the world’s greatest tragedy. And it is easily the finest Hamlet I’ve seen in many years.

Hamlet is now playing at the Chicago Shakespeare Theatre, Navy Pier, Chicago, through June 9. Check the website for specific dates, times, and tickets. Find more information about current plays in our front page recs and at theatreinchicago.com.

One thought on “Stellar cast and inventive direction make CST’s “Hamlet” one for the ages.”