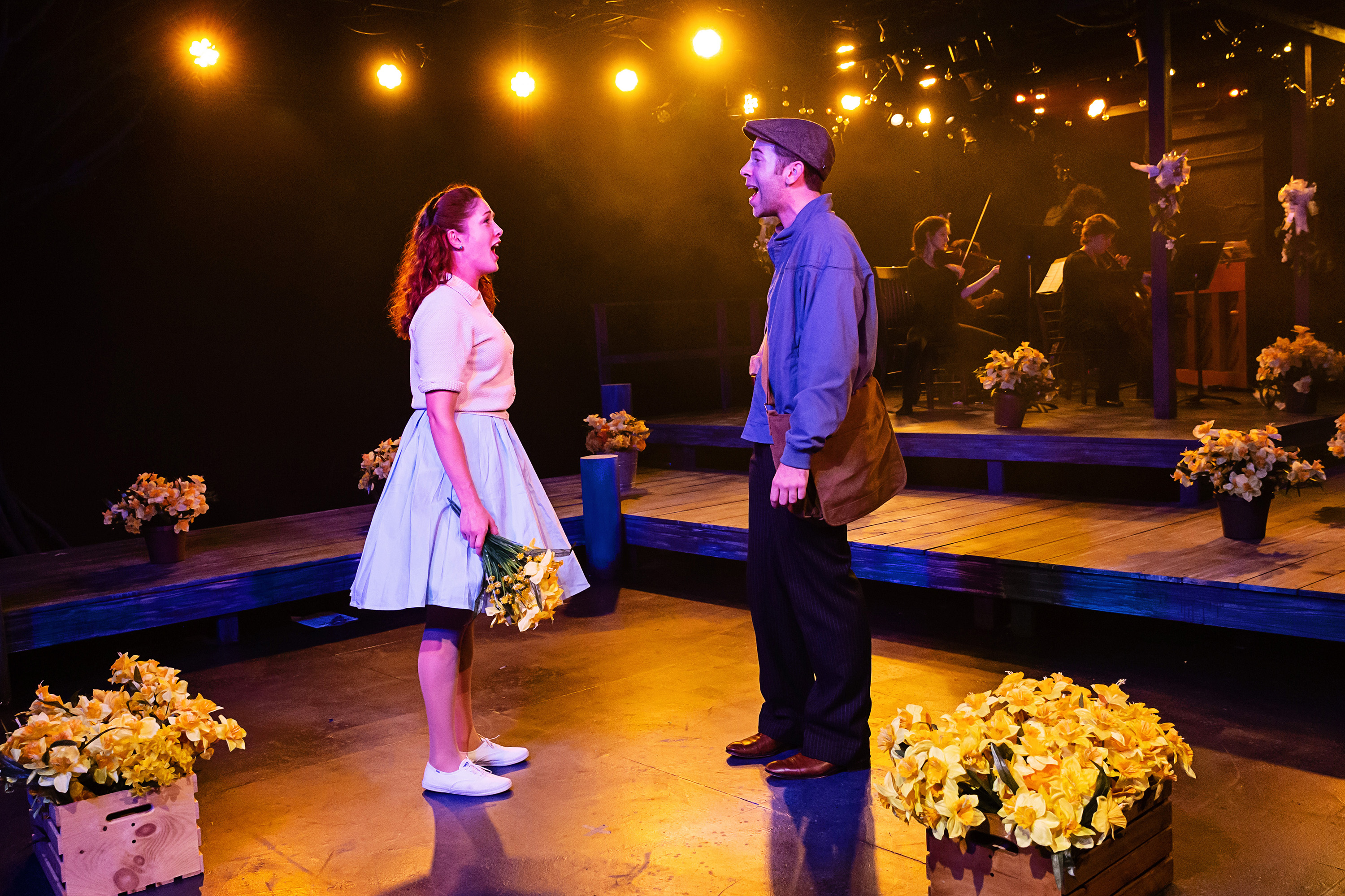 Based on the novel by Daniel Wallace and the film by Tim Burton, Big Fish (with music and lyrics by Andre Lippa and a book by John August), is such an uplifting musical that I really want to see it any time it comes around, no matter who is doing it. But when the company producing it is Boho Theatre, I’m doubly excited, as I have come to expect a lot from Boho, now completing its 15th season. And this production absolutely delivers: every aspect of the show is stellar, allowing its many life lessons to shine.

Tommy Thurston stars as Edward Bloom, a man whose interesting life is made even more so by the stories he tells his son Will (played as a child by Desmond Murphy and Ian Michael Pinksi and as an adult by Jeff Pierpoint) of his exploits, tales in which Edward is always the hero of some remarkable situation. Though he listened to them with awe as a child, these tales rankle the adult Will, who has grown up to be a man who believes only what makes sense, and his father’s imaginative accounts of experiences with giants, mermaids, witches, werewolves, and circuses defy credibility to his grounded way of thinking. They have caused a rift between father and son, for Will thinks of his father as a liar whom he doesn’t really know at all.

It is this rift that serves as the center of Big Fish. Edward has developed terminal cancer, and Will and his wife Josephine (Nicole Besa) return to Alabama so that the son has one final opportunity to learn who his father really is, if it is even possible for him to separate the man from the mythology.

Stephen Schellhardt’s deft direction (along with some fun choreography by Megan Farley) allows both this central story and the many digressive manifestations of Edward’s glorious life to come alive. Obviously a fan of the material, Schellhardt places us right in the middle of the tales and their magic, beautifully recreating such memorable characters in Edward’s life as the scholarly giant Karl (Robert Quintanilla), who becomes one of Edward’s best friends. We also meet the silent mermaid (Michaela Shapiro), the Witch (Caitlin Dobbins) who, Edward swears, told him exactly how he will die, and the circus owner Amos Calloway (Sean Michael Barrett) who plays a major role in helping Edward to learn about the girl with whom he has fallen in love with, Sandra (Kyrie Anderson). These are the featured players in Edward’s tall tales, along with a group of people he knew in high school including former sweetheart Jenny Hill (Alli Atkenson) and his longtime rivals the Price brothers (Matt Frye and Joshua Bishop).

The actors, playing on a lovely dock-like set designed by Lauren M. Nichols and accompanied by a vibrant onstage orchestra conducted by Michael McBride, all embody their vividly-written roles perfectly. Quintanilla, for example, makes a wonderful Karl in both his cave-dweller and scholar modes (and I don’t know if he had ever used stilts before this, but his movements in them are wonderfully natural). Bennett manages to conjure memories of Danny DeVito’s performance in the film while adding to the character his own impish energy. Dobbins is a force as the Witch (a role in which she gets to show off her powerful singing voice) and is backed by three of the other women who create some wonderfully eerie moments dancing with Farley’s creepy movements. Besa is loving and sympathetic as Josephine finds herself in the unenviable role of go-between for her husband and his father.

But this show is anchored by Anderson, Pierpoint, and (especially) Thurston. We first meet Anderson’s Sandra when Edward initially lays eyes on her as she and a couple of her sorority sisters audition an act for the circus, and here Schellhardt’s direction (aided by lovely lighting by G. “Max” Maxin IV) manages to take us deeply into both characters’ minds while also maintaining the external event. Anderson later gets an opportunity to show off her own voice and her compelling acting chops during her solo, “I Don’t Need a Roof,” which she sings to a very ill Edward.

Pierpoint somehow walks the edge between detesting and loving his father, and his frustration with the man is palpable. It would be easy for such a buttoned-up character to come across as the show’s antagonist, but both Schellhardt and Pierpoint are aware that it’s critical to see Will as a secondary lead, a man with whom we can empathize, in order to allow him to grow during the play in a believable manner. Pierpoint’s exasperated and haunting delivery of such emotional ballads as “Stranger” and the painful “The River Between Us” allow us to find our way past Will’s apparent lack of empathy for his father and discover the internal pain that he carries.

As for Edward himself, Thurston (who also played this role in a Big Noise Theatre production a few years back) completely understands the complex character of a man who was a “big fish” in his tiny Alabama town who finds himself weaving fantasies to embellish what he meets as he begins to take on the greater world. His worldview is summed up in his advice to his son: “Be the hero of your story if you can.” In the end, there is still no clear way to tell what in his life was true and what was invented, but it doesn’t matter: the one clear thing about Edward Bloom is that he is a dreamer who never allows life to get him down. He continues to “fight the dragons” he encounters every step of the way and his one regret is that his son mistakes the intent of his inspirational stories.

Big Fish is full of the Big Ideas that Edward discovers in his lifetime, the chief of which is probably never to fear what life throws at you and to tackle it with all of the enthusiasm you can. His encounter with the Witch helps him not to fear death, and he applies this lesson to everything whether it is working in a menial job, discovering that the woman he loves is engaged to someone else, or finding that his childhood town is in serious danger. Living this way makes “what’s next” in his life easier to face, as his romantic mind can always conjure a way through anything. It’s a lovely legacy to leave behind and an uplifting reminder that, even if things may be a bit thorny, it’s always possible to find the roses (or in this case daffodils) that life has to offer.