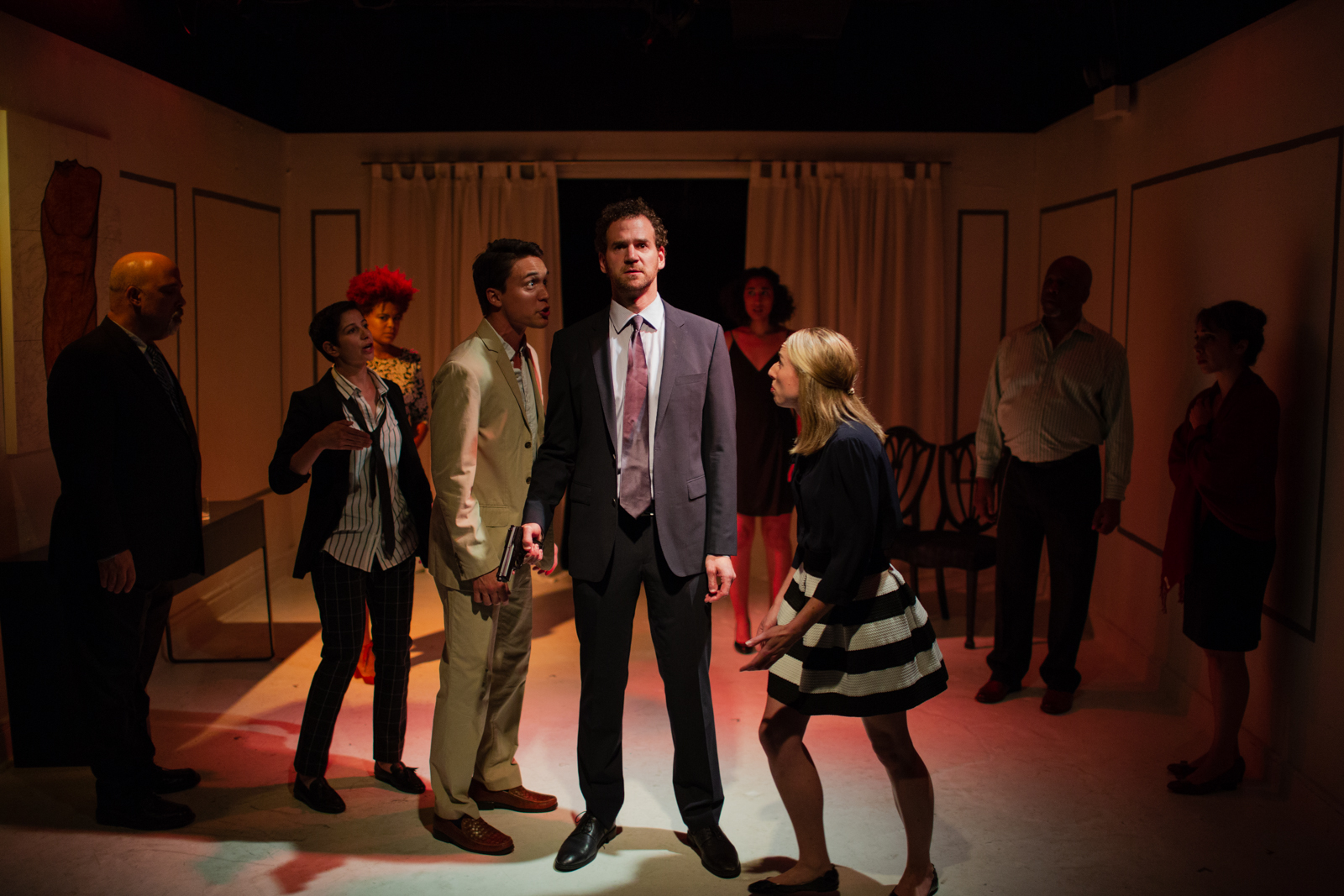 One must never place a loaded rifle on the stage if it isn’t going to go off.  –Anton Chekhov

In Leave Me Alone, a modern retelling of Chekhov’s Ivanov, the notion of Chekhov’s gun isn’t just a device; it’s a full-blown storytelling technique. The gun (a pistol) makes its first appearance at the very beginning of the play, in the possession of the unhappy man who will eventually use it. As the play progresses, the gun continually resurfaces, as if he is constantly thinking about it. Playwright Paul Michael Thomson and director Matt Bowdren make no effort whatsoever to hide or disguise their foreshadowing; it is about as overt as anything I’ve ever seen. But its very repetition works in its favor: though no one ever comments about the gun, every single cast member handles it before the play comes to its inevitable conclusion. It is a powerful and dramatic symbol. 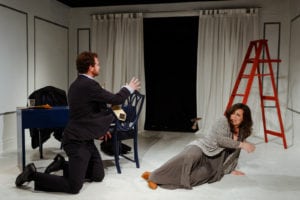 It also serves to extinguish a lot of the animus we might otherwise have felt toward the play’s protagonist, Nikolas Ivanov. Punctuated by quotations about suicide recited by actors in time-outs during scenes, Leave Me Alone asks us to consider how a person gets so lost in the first place. And it offers no easy answers. The depressed Ivanov is by his own admission not a nice person, a man who would cheat on his dying wife and who would schedule his next wedding on the exact anniversary of her death. Ordinarily, the audience would be predisposed to detest such a man—that certainly is the case for his Chekhovian predecessor—but here, each time we come close something occurs to mitigate things. (Someone else acts worse than he does or he does something noble like trying to spare his lover the curse of being with him.) Even the most powerful voice against him, his wife Anna’s doctor who actually calls him “evil,” is mitigated by her obvious hatred of him from the start. In love with Anna, she cannot be objective about someone who shows no passion in losing her.

Yet, as Allison Bechdel told us, “grief takes many forms, including the absence of grief.” Ivanov’s very lack of compassion for his wife may well, ironically, be an indication of how much he grieves her upcoming death. Though there is no denying that he mistreats her, and the script pulls no punches about how awful that is, we’ve seen him struggling with a suicidal depression from the get-go; we know the state of his mind. And if we didn’t, those many quotations and that repeated image of the gun would certainly inform us. 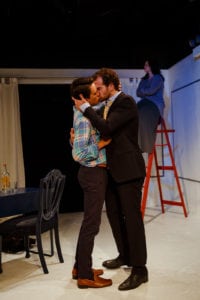 The performances that Bowdren gets from his excellent cast are uniformly wonderful. Sean Gallagher stars as the fading politician with serious money troubles at the play’s center. (More than once he is called out for falling conveniently “out of love” with Anna (Brenna Welsh) once her potential inheritance was cut off, and we know he owes his benefactor Aida Lebedev’s bank a small fortune. Still, it is never really clear that the accusations are correct.) Gallagher’s performance is fraught with a powerful depressive energy that even manages to cut through the times he gets very emotional (angry or in love) and furthers the inevitability of his character’s downfall. As Anna, Welsh spends a lot of the play high on a ladder (standing in for her lonely upstairs room), but when she comes down sparks instant empathy with her touching characterization.

All of the actors are equally capable in this production. Most notable among them is Ayanna Bria Bakari’s Dr. Love, who is so infatuated with Anna that she considers Ivanov a monster from the outset; Jordan Dell Harris as new love interest Sam Lebedev (the play’s tagline is “like Anton Chekhov’s Ivanov, but gayer), who acts as a voice of reason to self-destructive Nik; Michael Kingston as the boisterous and politically incorrect Uncle Matt, an old-school politician who has acted as Nik’s mentor; Gaby Moldovan as MB, Ivanov’s cousin, campaign manager, and conscience; and Nicole Laurenzi as Aida. Other cast members include Randolph Johnson as Paul Lebedev, Chelsea Turner as Babs, and Sarah Bartley as Gabrielle. Jake Sorgen’s original compositions and Lucy Whipp’s lighting design help Bowdren move in and out of various moments beautifully.

I asked my husband what he thought of this play and he said, “It was sort of brilliant.” I agree. Carefully constructed and wonderfully acted, Leave Me Alone is one of those little gems that deserves to find an audience. The Story Theatre has, in its inaugural production, entered the crowded Chicago theatre scene with a quite literal bang. Here’s hoping they stick around awhile.

Leave Me Alone is a Story Theatre production now playing at Heartland Cafe, 7000 N. Glenwood, Chicago, until August 12. Performance times may vary; check the website at The Story Theatre. Find more information about current plays on our Current Shows page and at theatreinchicago.com.