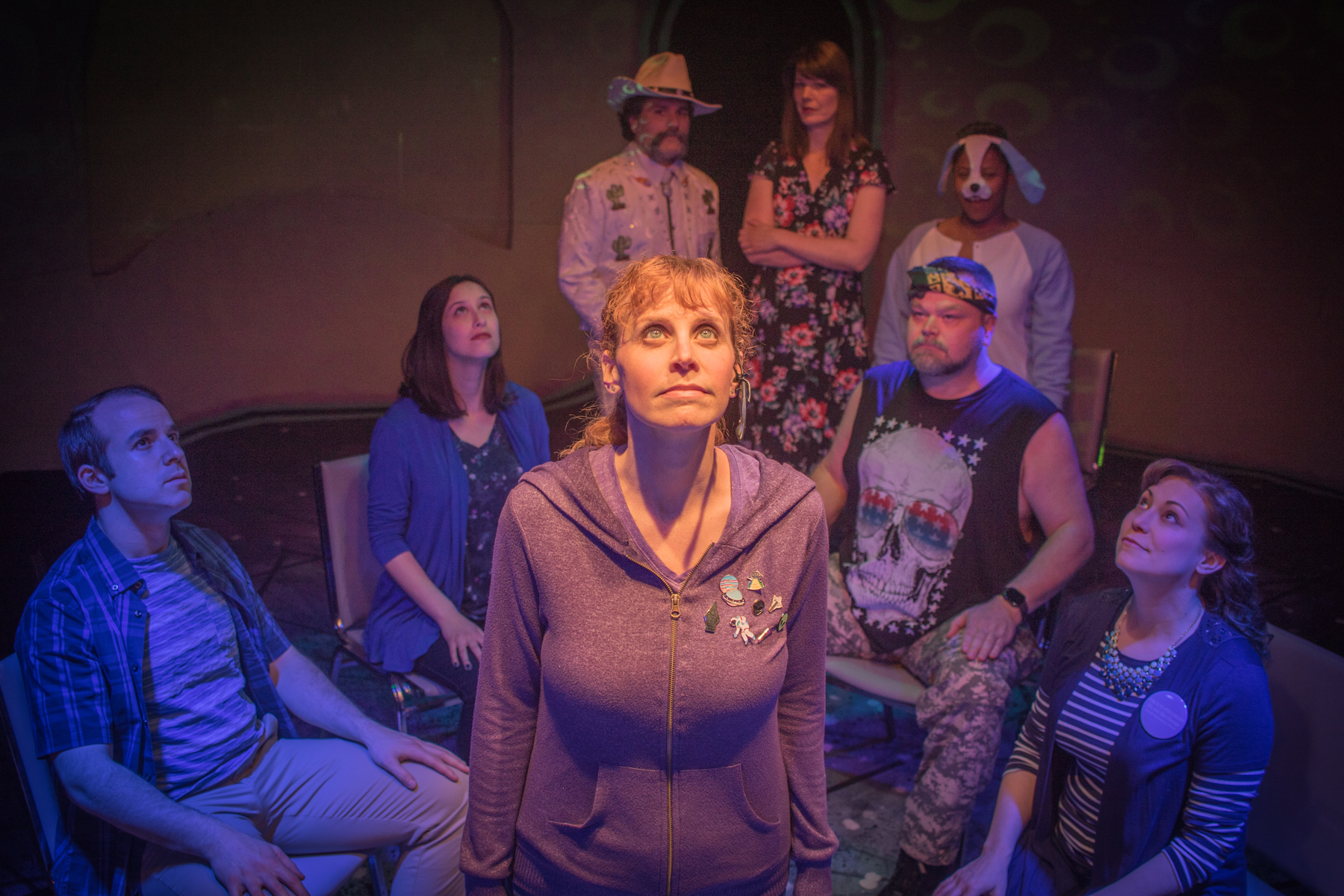 Anyone who takes on the task of writing or producing a new musical automatically gets kudos from me, since they are so complicated to create and see through to the stage. And crafting one that flits in and out of reality while exploring emotional loss is undoubtedly even harder to sustain. The writers of Take Me, Mark Guarino and Jon Langford, then, as well as all of those responsible for Strawdog’s world premiere production of it, deserve a hand. And they will get it: there is enough to enjoy in this musical, even it it doesn’t quite seem ready for prime time yet, to elicit positive audience response.

That begins with the director, Anderson Lawfer, who has shepherded this brand new blend of the poignant, the fanciful and the emotional to the stage, as well as his cast, a talented, enthusiastic group led by Nicole Bloomsmith as Shelly, a young woman who has been through the double hell of having a child abducted and a husband in a coma after a plane crash. Pretty much anyone would be in danger of losing touch with reality if that happened, wouldn’t they? Shelly begins to live in a world of fantasy, insisting that they both will come back. She has imaginary conversations with her dead husband (Michael Reyes). She finds a stuffed dog (named Doggie) that she loved as a little girl and imagines it has come to life to comfort her and take her back to easier times. (Kamille Dawkins plays Doggie and is very sympathetic.) And finally, seeking some way to keep herself going, she ends up a part of a group of alien conspiracy theorists who all claim to have been abducted at least once. With their help, she becomes convinced that both her husband’s spirit and her son have actually been abducted as well, and that the space people will return them to her if she, a former architect, succeeds in building an alien themed amusement park in the alien capital of the world, Roswell, New Mexico.

Meanwhile, she makes a living taking phone calls for a goliath cellular company, Doodle, which becomes the source of a lot of funny one-liners as she answers phones with things like “Doodle Wireless: dropping calls since 1994” and other witticisms. It seems as if Doodle, which also owns the airline her husband was flying, may play more of an important part here, but it remains merely a source of humor. What does end up important is her meeting an abductee songwriter from Nashville named Travis (Carmine Grisolia), who introduces her to the other abductees and provides emotional support as she begins her quixotic attempt to build that amusement park. Additional emotional support comes from Shelly’s parents, played by Loretta Rezos and Matt Rosin. Her father, for some unexplained reason, does not speak (maybe he has had a stroke?), but he is clearly on her side all the time. Mother wants to break through the barrier of her denial, and is more of a tough love force. Both of them are concerned for their only daughter who is going through such difficult times.

Bloomsmith is excellent as Shelly, immediately likable and believable whether in imagined love scenes with her husband, in fantastic conversations with her stuffed dog, or in anguish at her personal losses. But Guarino’s book keeps jumping all over the place and unfortunately every time its focus is on anything other than her it seems to be marking time. Scenes with a farcical doctor and nurse feel especially forced, as does a long scene with the zoning commission of Roswell, whose members are all—for some reason—Russian dogs. Langford’s songs, too, are inconsistent and unmemorable, especially those given to Shelly’s mother (though Rezos does everything she can with them) and to Grisiola (another fine singer whose voice is mostly wasted, even in a final song that is supposed to be something remarkable). It just feels as if this piece needed more workshopping; it’s a great idea with a great cast and some strong tech (especially John Kelly’s lights—along with Tony Churchill’s projections—and Heath Hays’ sound), and it may be worth seeing for those reasons alone, but it really could have been much more.

Take Me is now playing at the Strawdog Theatre, 1802 Berenice Ave, Chicago through June 22. Check the website for specific dates, times, and tickets. Find more information about current plays in our front page recs and at theatreinchicago.com.