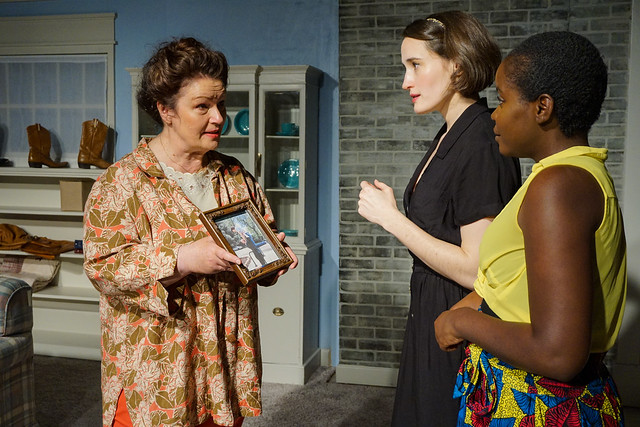 According to Artemisia Theatre, Sweet Texas Reckoning is a comedy, but you’d have to pardon audiences for not picking up the humor in this powerful production of Traci Godfrey’s play about familial relations, bigotry, and the coming out of a gay woman to her estranged mother. Not that there is anything wrong with that: if it plays as a solid drama, that just means that director Julie Proudfoot has accentuated the plentiful elements in the script that might move us and that the play’s four actors have created characters that we can care about.

The basic plot involves a visit home to Texas by Kate (Scottie Caldwell) at the prodding of her wife Samantha (Anita Kavuu-Ng’ang’a), who hopes the trip will help Kate to settle a lifetime of differences with the alcoholic, racist, and homophobic mother Ellie (Molly Lyons) who long ago abandoned any pretense of maternal responsibility for her children. A fourth character, Alan John (John Wehrman), is a man with whom Kate grew up, a man who has loved her all of his life and whom her mother hopes she will finally settle down and marry…until she discovers Kate’s orientation. How this is a setup for comedy I don’t know, and it certainly does not play that way in this production. However, especially in conservative Texas, the situation is rife with dramatic possibilities that Proudfoot exploits.

Godfrey’s script is a bit facile: she sets up the conflicts well but then brings things to a head very abruptly and resolves them too easily. However, within that framework she gives the actors some strong material to deal with. Lyons is terrific as Ellie. The words coming out of her mouth are cringeworthy, but Ellie can’t see anything wrong. It’s not just her upbringing, either; as her daughter points out many times, she just does not care enough to try. Yet Ellie does know that ultimately she is responsible for the terrible relationships she has with Kate and her brother Baxter (who does not appear) and even with their father, and that gives the character some real depth that Lyons is able to show amid Ellie’s drinking and bigoted language.

Caldwell is also strong as Kate, a demanding New York choreographer whose disgusted animosity toward her mother may be her strongest emotion. Still, Caldwell is also excellent in quieter moments such as one on one conversations with Alan John and Samantha in which she shows us the level of caring that her character is capable of outside of her mother’s presence. Kavuu-Ng’ang’a’s Samantha, who lost both of her parents in her childhood, is a mellow character who is willing to swallow almost anything, no matter how vile, in order to attempt to bring about a reconciliation between daughter and mother, and Kavuu-Ng’ang’a is a highly likable actor whom we instantly care for. In fact, she is so likable that both Ellie and Alan John take to her quickly before the truth of her relationship with Kate is revealed. It’s a complicated situation, and though she holds back Samantha’s true reactions to Ellie’s intemperate remarks, Kavuu-Ng’ang’a’s subtle alterations of voice and expression allow us to see clearly what the character is thinking.

Wehrman also has a complicated role: Alan John is totally driven by his deep love for Kate and fully expects (based upon little but the dreams of himself and Ellie, whom he calls “Mama”) that Kate is returning to Texas to marry him. It would be fairly easy for Wehrman to play him as a stereotype, but both the playwright and the actor are better than that: when Kate comes out, Alan John reveals himself to have much more depth than he seems at first to possess.

Given the set-up, it’s easy to understand that Sweet Texas Reckoning is a very emotional play. It’s also a pretty short one, at 1:45 including an intermission. Godfrey might have done herself and her characters a favor by giving the huge, passionate swings in their reactions a bit more room to develop more naturally, as everything seems to happen way too quickly for such a fraught situation and tensions dissipate with remarkable suddenness. Still, the play’s resolution is satisfying if a bit too rosy for the circumstances, and Godfrey is sure to allow each of her characters to learn something important about themselves and their relationships. Credit Proudfoot for focusing on developing these characters, even if it is at the expense of whatever humor was there to be mined.

Sweet Texas Reckoning is an Artemisia Theatre production now playing at the Den Theatre, 1333 N. Milwaukee, Chicago through June 30. Check the website for specific dates, times, and tickets. Find more information about current plays in our front page recs and at theatreinchicago.com.