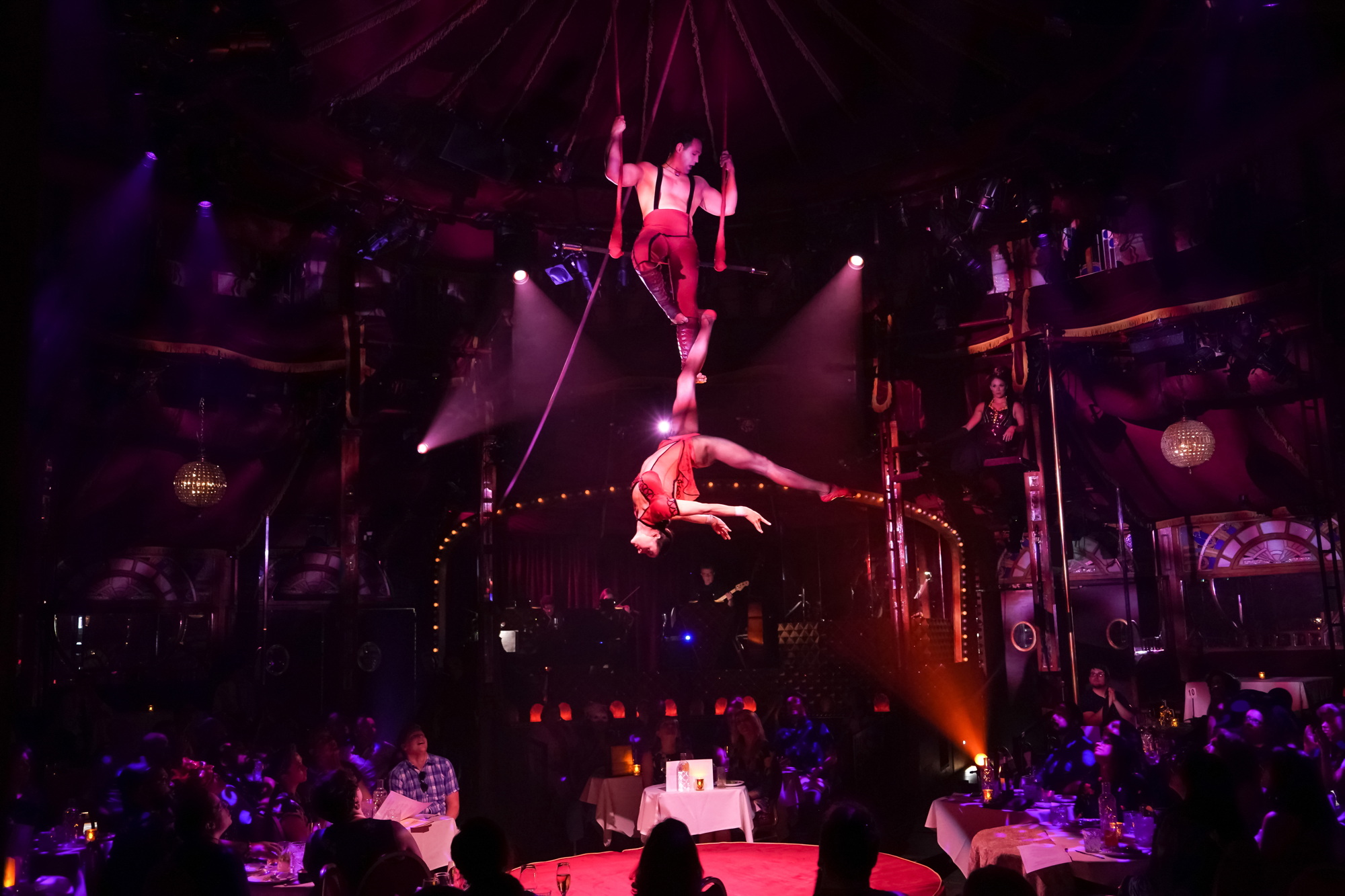 Sitting at the thoroughly entertaining combination of European cirque, theatrical and operatic singing, cabaret, burlesque, low comedy, and a sumptuous dinner that is Teatro ZinZanni’s Love, Chaos & Dinner, the only thought going through my mind was, “Why did it take so long to bring Seattle’s incredible long-running company to Chicago?” But never mind that: let’s just rejoice that they are here. In a long-abandoned and hidden hall rediscovered by construction crews as they refurbished the downtown Cambria Hotel (which was once a Mason hall), ZinZanni has built an old-fashioned Belgian mirror tent, a circular performing space that has no comparison anywhere in the city. Called Spiegeltent Zazou, this space fourteen floors above the James M. Nederlander Theatre is now the home of this bold, acrobatic, breathtaking production that should quickly become a major destination for Chicagoans seeking an evening out.

Much smaller than the tents that Cirque Du Soleil sets up for its productions, and crowded with tables for dining, the Spiegeltent Zazou by necessity limits the variety of cirque performances displayed, but Teatro ZinZanni does not skimp on the talent. Love, Chaos, & Dinner brings together a dozen internationally renowned performers into its intimate space from countries around the world. Among these appealing acts are the body-juggling Anastasini Brothers, the compelling aerial performer Elena Gatilova, impressive juggler Gamal David Garcia, French cirque performer Domitil Aillot, and Chicago’s own Duo Rose (Samuel and Sylvia Rose), who present a sensual combination of aerial arts and contortion.

Frank Ferrante is the comedic master of ceremonies as “The Caesar,” an intentionally overblown and yet endearing character who often brings audience members into the center circle to take part in his gags. One major bit has him seeking a new Caesar for a new troupe based in Cicero. He has three men join him to go through a series of tests to see how they would do in the role as he zings them with silly one-liners, many of which are related to their professions. (On this night that included a firefighter and a drag queen. Ferrante looked as if he’d died and gone to heaven.)

Joining Ferrante as the co-leader of this troupe is Rizo (Amelia Zirin-Brown), a New York-based performer whose powerful voice and comedic skills are on display all evening as she interacts with the audience and sings a variety of well-known songs. Chicagoan Kelly Britt adds to the ambience with her glorious operatically-trained voice, a nice counterpoint to Rizo’s theatrical belting. Also acting as glue to hold the evening together are the Mutt and Jeff looking clowns Tim Tyler (aka Mr. P.P.) and Joe De Paul. Both of them entertain throughout the night, alone and together, and we are even treated to De Paul’s unexpected Sinatra-inspired song stylings along the way.

This isn’t a cheap night out (tickets range from $99 to $189), but it does include a four-course meal created by Chicago’s Debbie Sharpe (aka “The Goddess”), so you can figure that into the cost, which makes it easily on par with other downtown experiences. Among Sharpe’s entrées at this time are Braised Beef Short Ribs, Bucatini Pasta, Oven Roasted Chicken Breast, Thai Curry, and Herb Roasted Atlantic Salmon. I enjoyed the latter, and I can say that, while slightly dry for my taste, it had an excellent flavor and paired well with the ratatouille and toasted farro/spinach pilaf that came with it. There are also plenty of custom cocktails available. The meals are served at small breaks throughout the evening, and you can enjoy them while watching often-spectacular feats of acrobatic skill.

Teatro ZinZanni’s arrival in Chicago adds another exhilarating option to the eclectic variety of our city’s entertainment and an exciting new downtown destination for tourists and Chicagoans alike. It’s a thrilling, three-hour-long joyride accompanied by a really marvelous house band led by Russ Long in a beautiful, unusual space where the performers are all around you. There is a reason that this company has been going so strong for so long in Seattle and San Francisco, and they should expect similar success here.