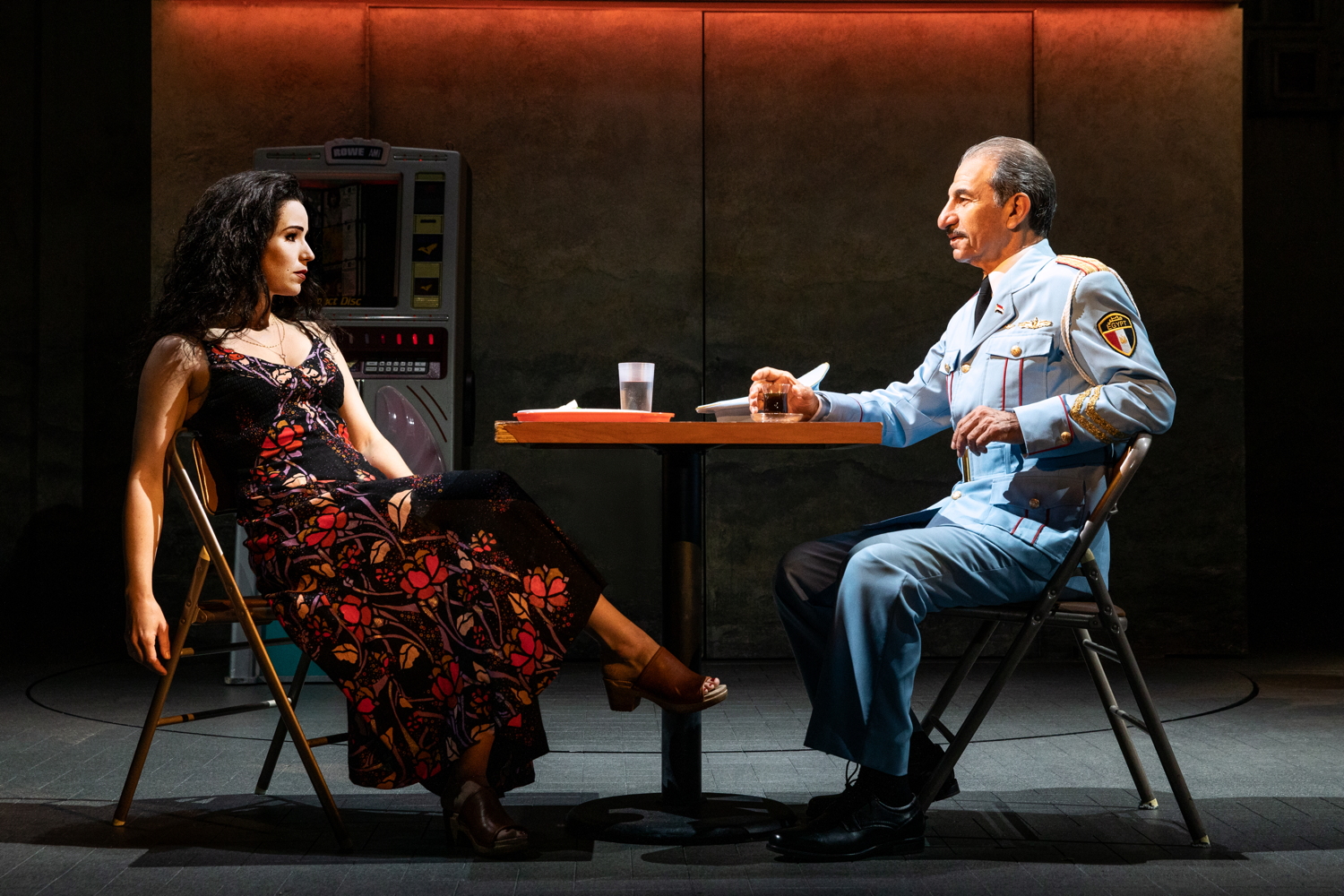 “Once, not long ago, a group of musicians came to Israel from Egypt. You probably didn’t hear about it. It wasn’t that important.”

This is how The Band’s Visit begins and, for what it’s worth, it is a completely true statement: there was nothing of major consequence in this little orchestra’s 1996 trip. However, due to an understandable error that resulted in the band’s arrival, not at Pehta Tikva, a cultural center, but instead at Bet Hatikva, a small town isolated in the middle of nowhere, this little event improbably spawned not only a film but a Tony Award-winning musical.

“Stick a pin in a map of the desert. Build a road to the middle of the desert. Pour cement on the spot in the desert. That’s Bet Hatikva,” sings Dina, the proprietor of a little cafe near the bus station, explaining to the visitors that they have come to a town she calls “basically bleak and beige and blah, blah, blah.” Chilina Kennedy, best known for her 1000+ performance run as Carole King in Broadway’s Beautiful, plays the tough yet vibrant Dina, her hardened attitude about her life forged in the fires of desert heat and dull, repetitive sameness. Sasson Gabay (who played the same role in the 2007 movie) plays Tewfiq, the leader of the Alexandria Ceremonial Police Orchestra, whose quiet, dignified manner brings out the latent romantic in his host. Dina and Tewfiq make an unlikely couple, but then again this is not a romantic comedy. Still, as the band is stuck in Bet Hatikva until the next bus in the morning, they have plenty of time to get to know each other.

Much of the show’s success depends upon Kennedy and Gabay, who assay their dynamically different characters—people who under any other circumstances would never have spent an evening together—beautifully. Gabay’s staid, serene presence contrasts perfectly with Kennedy’s charismatic performance as Dina finds herself more and more entranced by this strange foreigner who is so unlike anyone she has ever met.

The rest of the cast (including those members of the orchestra who perform on stage as the band) is uniformly excellent. Among the standouts is Joe Joseph’s Haled, a confident young man who doesn’t allow his lack of strong English to get in the way of his flirtatious approaches to Israeli women. Adam Gabay’s Papi, as shy around women as Haled is confident, is a joy in a scene at a roller rink in which he can’t quite seem to force himself to get together with a girl he has a crush on, and he gets one of composer David Yazbek’s funniest songs. And Mike Cefalo plays on our heartstrings as a young man who spends every night staring at the community’s lone payphone (no cell phones yet) waiting for a call from his girlfriend, from whom he has not heard in months.

As to “the band,” they have plenty of opportunities to delight the audience as they hang out in the town until late into the evening playing their music. Tony Bird, George Crotty, Evan Francis, Roger Kashou, Shai Wetzer, and Ronnie Malley (along with Adrian Ries and Mark Van Ziegler, offstage members of Rick Bertone’s orchestra) receive several well-deserved ovations for playing Yazbek’s lovely, unusual, Arab-flavored score. They even get to show off a bit in a final “concert.”

Director David Cromer used his original Broadway design team to create the touring version of the show, most of whom were at least nominated for Tonys if they didn’t win them, so what we are getting in this production is as close to the New York version as possible. With Itamar Moses’ witty book and Yazbek’s music and lyrics, The Band’s Visit is a treat. It is a small, charming slice of life, a quiet and realistic musical clearly aimed at an adult audience, the kind you rarely see on Broadway these days because it defies commercial expectations. There is nothing loud or garish here and very little in the way of spectacle to distract from what is at heart a very human story. No helicopters, no chandeliers, no dancing cats, not even much color to diminish the effect of the tiny “beige” town. It is up to the actors, under Cromer’s clear guidance, to make the show come alive, and they do. By the time the entire cast gathers onstage to sing the plaintive anthem “Answer Me,” the audience has been, like the band, guests in this little town, witnessing an evening full of intimate moments among its citizens. This ninety-minute show won’t change your life, and it isn’t realistic to think that this single night would change anything for these characters, but you will remember the emotional experience for a long time, and ultimately that is what good theatre is all about.

The Band’s Visit is a Broadway in Chicago production now playing at Cadillac Palace Theatre, 151 W. Randolph, Chicago through Sep 15. Check the website for specific dates, times, and tickets. Find more information about current plays in our front page recs and at theatreinchicago.com.